The Planning and Transport Committee have given permission for two massive sky scrapers, just a couple of hundred metres away from Bank Junction.

Chair of the committee, Chris Haywood, claims Taxis are to be banned from  Bank Junction for safety reasons???

Giving Planning consent for these two new skyscrapers in the city, will create hundreds of construction vehicle movements for HGVs -the very vehicles, allegedly responsible for killing the most cyclists and pedestrians that he is claiming to protect.

There will also be 22k employees working in the two Skyscrapers plus additional visitors just 200m from Bank Junction.

Surely the City of London should be looking to create a safer Transport environment, not make it worse?

How is that Chris Hayward -who states he is not paid for the role as Chair of the Planning and Transport Committee but does it for ‘honour- is responsible for Planning decisions for hundreds of millions of pounds?

Surely there is something not quite right here when the decisions appear to be this unreasonable?

Yesterday's demo, a massive success even in the event of a section 14 limiting the "static protest" to just 30 minutes, drivers moved on to two other venues and held out for over 3 hours. 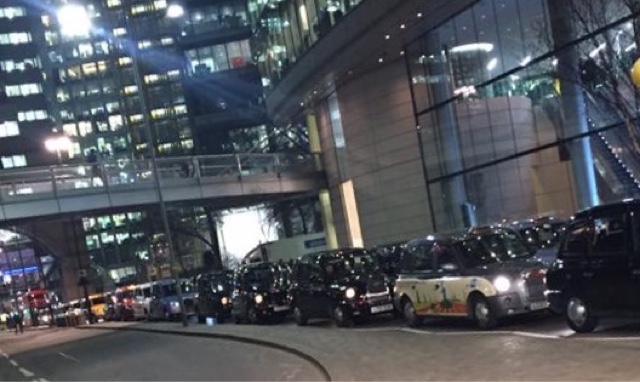 A rolling protest by black cab drivers brought large parts of the City of London to a standstill during rush hour.

Following a 3pm protest at Bank junction on Tuesday afternoon - as part of an ongoing row over its planned closure to cars - the taxis travelled to Old Street for an unplanned demonstration.

The busy Old Street junction was grindlocked until it reopened shortly after 5pm, when there were reportedly delays of up to an hour, with motorists advised to avoid the area if possible.

The protest then moved on to London Wall, where delays of up to 40 minutes were reported, before it came to an end.

Black cabs descended on Bank junction at 3pm as part of a five-day protest, with further protests planned for Wednesday, Thursday and Friday.

They are protesting against proposals being considered by the Corporation of the City of London to restrict vehicles, including licensed taxis, being granted access to the junction.

Only cyclists and buses will be able to use the roads once the 18-month scheme starts in April.

Superintendant Helen Isaac of the City of London Police said: “Whilst we have not had any direct contact from the organisers, we are aware of plans posted on social media for a demonstration in Bank junction in January and plans are in place to facilitate such an event.

"We are keen to work with the organisers and would encourage them to get in touch with us.

Posted by Editorial at 5:20 AM

Can I ask what happens after day5 ???

Hmmm, surely the point of demonstrating is to maximise disruption?

Taxi drivers are privy to information that could well be of benefit to specific targeting rather than general protesting. Don't want to turn the public against you by holding them up too often.

Go national with this protest, and we all win,

How about a 4 month break , the trade orgs come together as one voice and ' negotiate' more determinedly and competently than ever in demanding a comprehensive enquiry/study /investigation into TfL's alleged corruption and competency in controlling our trade. Let's demand from this 'one voice' approach that they show the driver tangible results on the much heralded 'wish list' that Macnamara trumpeted as a new beginning with Khan. Four months hiatus ? No,because if there is one thing the Ltda should at least be a able to do,because of its size and funds, is competently collate a whole host of detailed statistics on Uber's wrong doing,everything in the finest detail ( I mean absolutely the 'kitchen sink 'here , stats on accidents,deaths,serious injuries, rapes, sex assaults, the chronic congestion,emissions and so on.If there is one thing above all the Devils spawn at TfL like it is data. Isn't that why they suckle from Uber's breast.)Present it to the 3 jokers Khant,Doublecross and Stoolpidgeon. When Uber get re licensed and we get zero from the wish list, come summer in those steamy sultry hot afternoons we choose the occasion to demo like never before. One last super human effort. Encourage the dead beats who never come to turn up. Ten thousand at four points north east south west, brief media explain our crisis. At the moment I'd gladly spend my £16.90 subs on Semtex's hound for dog treats, I feel it's a waste of money the org I pay, they've lost so many disputes, it's only the legal cover a driver needs that keeps my dd in place