7/7...We Will Always Remember, We Will Never Forget... By Jim Thomas 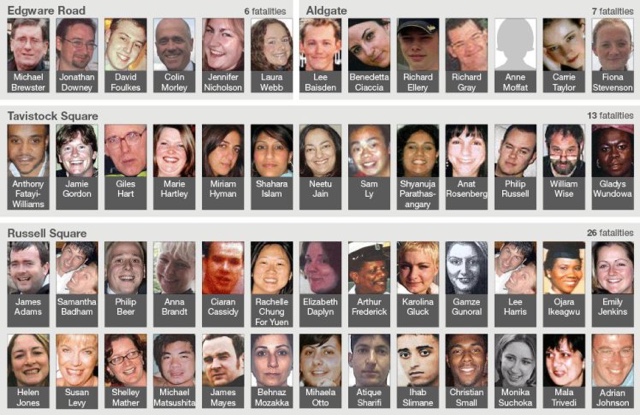 Eleven years ago today, 52 people were murdered and more than 700 injured when four bombs went off during a busy London rush hour.

The devastating terror attacks left a mark on our nation as one of the worst terrorist incidents in recent history.
Working nights, I was asleep and knew nothing of the carnage which had taken place. The phone rang
"Hello"
It was my wife Christine who worked for TfL
"Turn the TV on" she said "call me back, I can't talk at the moment it's too emotional".
I turned the TV on, and it was on all channels.
I remember dropping to me knees in disbelief, hoping to God I was in some sort of nightmare dream.
My Christine never came home that day, she volunteered along with her colleagues to stay at her post and carried on working through the night.
Chris was seconded to a support unit, set up to help trace the families of victims. Victims were being identified by what was left of their processions.
My Christine saw images on that day, no one should ever have to witness.
Many of London's Taxi drivers stopped mid-shift and formed what could only be described as the fourth emergency service. Carrying the walking wounded to and from local hospitals and later on into the early hours, taking exhausted emergency staff workers home.

I joined the ranks with my colleagues that day/night, many journeys undertaken in stark silence. Although all journeys were being undertaken free, many of the wonderful nurses and auxiliary staff insisted on payment and left money in the tray. But I felt couldn't accept and so later donated to the Rainbow Trust.
I phoned my wife at regular intervals to see if she was ready to come home, but she was adamant not to leave her post. In fact she stayed working till midday on the 8th.
Later next day, we heard the awful news that Susan, the beautiful wife of my friend Harry had died from injuries sustained on the train underneath Russel Square.
Susan Levy was the first casualty to be identified from the train, she was rushed to the Royal London hospital but died on arrival.
An inquest in 2010 heard that legal secretary Mrs Levy "loved her job and was very good at it". Born on 17 December 1951, Susan had become accustomed to sharing the first half of her 17-mile commute from Newgate Street Village, near Cuffley, with her younger son.

On the morning of the attacks she had said goodbye to son Jamie, who got off at Finsbury Park, while she remained on the Piccadilly Line train which exploded underneath Russell Square.

At the inquest, Dr Alistair Mulcahy, a consultant anaesthetist at the Royal London Hospital who was working as a volunteer doctor for the British Association for Immediate Care on 7/7, said Mrs Levy was discovered struggling to breathe with "very severe lacerations" to her legs.

Asked if she could have survived if tourniquets had been applied to her limbs at the scene, he simply said: "Yes". 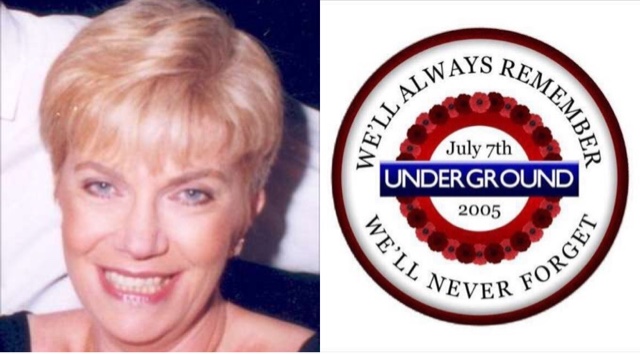 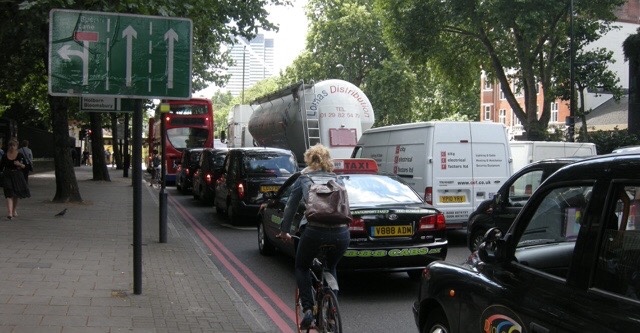 The Mayfair Mob (MM) have been working extremely hard in the background since the implementation of the Cycle Super Highway (CSH) route last year.
For those who are unaware, Camden Council implemented a CSH scheme under an Experimental Traffic Order (ETO) last year in the Bloomsbury area and are planning a consultation, probably in September to make these changes permanent.
As part of the public transport network you wouldn't have to look far to find a London Taxi driver who has not been affected by the congestion caused by this scheme, especially around Russell Sq and High Holborn.
The Mayfair Mob have engaged with representatives from the Imperial Hotel Group (most notably SCP Transportation Planning) for many months to help find a solution which suits all forms of traffic in the area.
Whilst we fully understand the importance of CSH schemes it should not be to the detriment of businesses and residents in the area.
Imperial Group have liaised with not only ourselves but resident groups, other businesses and the emergency services to come up with an alternative proposal which ultimately should reduce the congestion in the area and still give cyclists a safe way to travel.
EXHIBITION
Imperial Group are to hold an exhibition in mid July to showcase these proposals to which drivers are welcome to attend and give their views. Details of place and time are at the end of this article. There will also be an opportunity to give your views online. How to do this will be published through the various MM Twitter pages in the near future.
AIM
It is hoped that Camden will include this proposal into the permanent consultation in September as their main choice, bringing a solution that suits all traffic in the area.
ORGS
The UCG and the RMT have both been updated with the new proposals and are both backing the new scheme 100%. All other trade bodies are invited to contact me via DM and I will happily update them in advance of the exhibition is they require. MM are certain that once the other trade bodies have been updated they will support these proposals going forward.
This new scheme is a real step forward for the taxi trade and will help reduce congestion and pollution whilst keeping cyclists moving and safe.
MM would like to say a big thank you to the Imperial group for all their hard work on this project.
MM - WORKING SOLUTIONS FOR THE TRADE.
The exhibition will take place on -
Thursday14th July 19.30 - 21.30
Saturday 16th July 10.30 -16.00
Emmerson Room
Mary Ward House
Tavistock Place
London
WC1H 9SN.
Ends...
Want to know how the locals feel about Camden's temporary system:
Click Links
>Read Marchmont News< 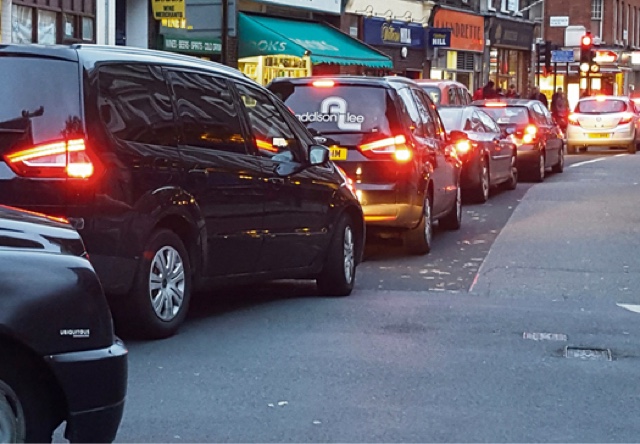 >Read Camden news journal <
Posted by Editorial at 1:01 AM 14 comments: 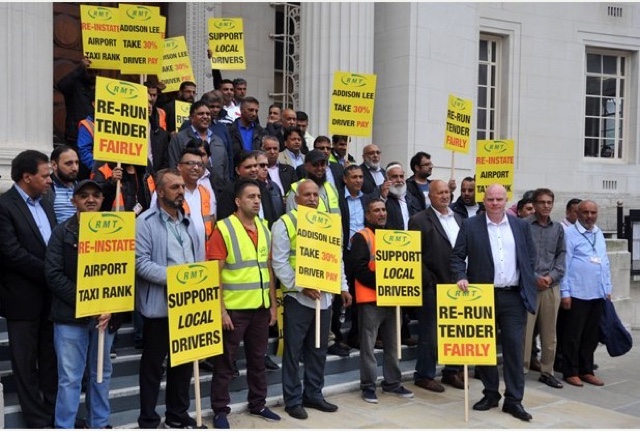 RMT drivers protesting on the steps of the Town Hall about the airport contract being awarded to Addison Lee
LUTON Airport has told hackney carriage drivers the decision to award their contract to a rival taxi firm was fair.
Drivers from Luton Hackney Carriage Association say they face losing their job after the contract to operate the taxi rank they have worked in for 40 years was awarded to London based Addison Lee.
Drivers have argued that the decision will force them to take their black cabs to the town centre, where there is not enough work.
Munir Ahmed, a member of the association, said: "Years ago we were required to change all our comfy cars to back cabs to enhance the image of Luton Airport.
"So instead of buying a comfortable car for £15,000 I was obliged to buy an uncomfortable black cab for £40,000 with repayments of over £900 a month for four years.
"This pushed up all our fares and made us less popular with public. Now the decision has been reversed, but instead of letting hackenys convert back to cars they have awarded the contract to Addison Lee.
"When we worked as Hackney drivers we worked for ourselves, what we took we kept. Addison Lee is taking 30% off drivers who switch to their vans and cars. By switching, it's like taking a 30% pay cut, it's scandalous.
"What compensation will be given to drivers in causing the loss of jobs after decades working at the airport?"
Fellow driver Dahood Khan added: "Does this mean the policy was wrong when they forced us to buy expensive black cabs instead of saloon cars, claiming it would add to the prestige of the airport?
Members of the RMT recently held protests asking the tendering process to be undertaken again 'fairly', but Luton Airport say the decision was a fair one and there are no grounds to award drivers compensation.
A spokesman said: "The tender for a ground transportation provider has been a clear, fair and open process which began in December last year. Our priority is to ensure our customers receive the best possible service, and the tender was carried out with this in mind.
"There are no grounds for compensation under the previous contract which ended in June.
Posted by Editorial at 1:22 PM 6 comments: