An Offer From 'The Cab Driver' That Shouldn't Be Ignored. 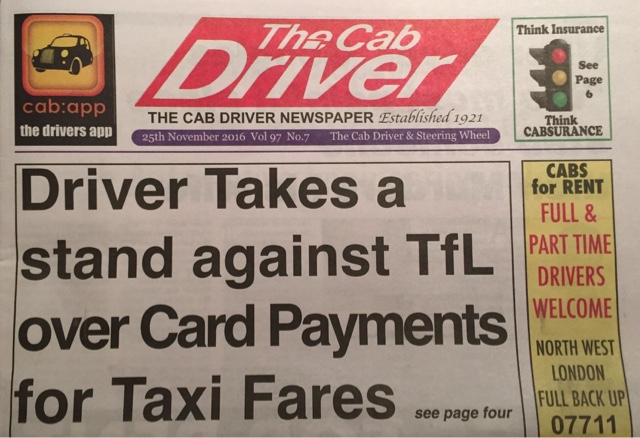 This month saw another taxi protest that was not as well covered by the media as it could have been.

Several drivers have told us that over a number of these protests, they have had other drivers approached them in an angry fashion, asking them why they were working and not joining in with the protest.
The simple reason (they say) is because they didn't know about the protest.
'The Cab Driver' understands their view, if they are not followers of social media and don't frequent taxi establishments such as green huts or the eating places used by cab drivers, then it's quite possible not to be in the 'taxi driver loop'.
Social media is a great way of getting messages around and no trade paper, especially one that comes out every two weeks, can come anywhere near social media for speed. But the trade needs to understand, we are missing a large section of the target market.
Releases to the trade press before a protest, with bullet points of what the protest is about, would also enable all drivers involved to be singing from the same hymn sheet.
Some trade organisations were telling reporters that we were protesting about Uber! Yet one driver on the radio stated "it's not about Uber, we are protesting about the incompetence of TfL".
The whole trade needs to be on the same page.
We at Cab Drivers would be happy to publish details of these proceedings as other trade papers would too no doubt.
Posted by Editorial at 5:47 AM

In a very cold February 2012 I stood at Waterloo Station rank and also City Airport giving ou flyers for the Cabbies Against Borris protests at Tooley Street.
They gave bullet point details of why there was a protest including the call for a Public Inquiry
We also had traffic reports through radio stations letting people know before the protests happened which also let taxi drivers know.
About a dozen drivers attended.
The media are controlled by those in power.
The trade press will not support someone elses protest.

It seems many taxi drivers just are not intrested in taking action or cant understand that without it they will be out of a job.
DD

This article proves that the twitter mongs are duluded that when they tweet the whole trade is listening - when in actual fact it's more like two to 300 individuals tweeting a mong themselves. Many cab drivrrs don't belong to a trade org, nor do social media for many different reasons. Feckless leadership, failure, and many years of complacency is hardly going to encourage drivers to join a trade organisation or get active. Face the facts, if you want to point the finger of blame, look at the people you give you're monthly subscription to that give you FA in return.

There is a tendency to think that if your into or passionate about something, ie trade situation, politics that others share some of your interest. The same can be said for most things sport, news etc. The reality is your average cab driver doesnt follow media related cab stories be it on twitter or the net in general, or even read the taxi papers.
I got chatting to a cab drive rat a rank of many years service relaying a story in the latest taxi, who replied "dont read it, never have"..There is your average cab driver.

Reading the posts above I honestly cannot argue with the most of the responding posts about driver apathy...ignorance...and frankly greed.

There are many drivers (particularly newer drivers) who are putting their mortgages on the survival of our trade...literally and are seeing trade representatives argue between themselves over what to do about it... whilst things continue to go up in smoke.

The drivers who still refuse to react to civil action by way of dissent and demonstrations are becoming more attentive and are finally waking up to the fact that there will be no other options available to them owing to TFL's dereliction of duties and also by certain large unions who choose not to listen to their members... and all drivers now need to join and choose active union representatives in the ongoing struggles we are now facing .. and remember the biggest battles are still to come.

Information and news is paramount to our trade and the slow disappearance of taxi newspaper outlets is very telling but social media is becoming a worthy source of news especially with the drivers I have spoken too and also word of mouth still matters greatly so listen and share news amongst each other and get out and fight for your qualified vocation and make yourself feel better at the same time....never give up.

It's a great idea.
I've gone along ranks giving out leaflets with bullet points, dates and info. Yet there're still driver who bluntly refuse to take the flyers.
You can take a horse to water ...