TfL Charging Passengers For Using Free Replacement Buses....And They Know They're Doing It. 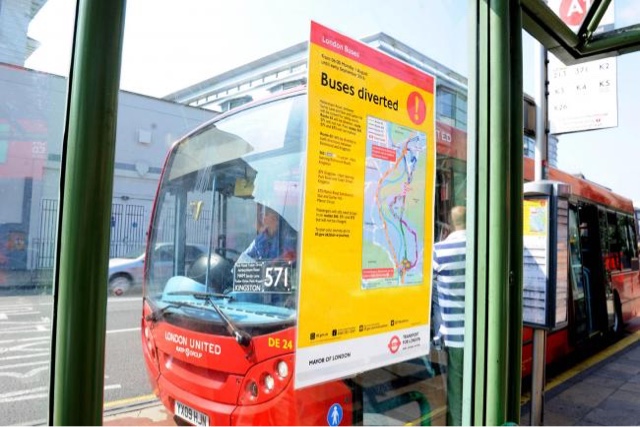 Kingston and Richmond bus users could have payed out of hundreds of pounds unnecessarily after being charged full fare for free buses — and Transport for London knew it was happening.

The 65 and 371 routes from Petersham Road, between Sandy Lane and Star and Garter Hill, and into Kingston have been diverted or cancelled because of utility works that started on July 31.

The TfL replacement buses are advertised as free during the five week-long roadworks and posters state: "Passengers will still need to tap in but will not be charged."

But anyone using a contactless Visa card instead of an Oyster card will see the full £1.50 fare come from their account.

Siobhan Pestano, who was travelling to Kingston from Ham, noticed she had been charged after boarding the 371 replacement.

She said: "When I noticed the money had come out of my bank account I rang TfL to complain and was told that it was because I'd used my [Visa] card and not an Oyster.

"Well that really set me off because they knew it was happening. I was completely furious.

"Why are there no posters saying 'Oysters only' if they know other cards will be charged.

"These works are happening in the summer holidays when families tend to use the buses much more.

"There will be people who can't afford the charge if they were expecting not to pay.

"Others will not have time to call up TfL for a refund."

Anyone using a contactless payment card twice a day, five days a week on the supposedly free routes would be eligible for a £75 refund after the five weeks of works. TfL cap all bus journeys in London at £4.40.

Emma Smith also found she had been charged when she used her contactless card on the 565 route. She claims she spent 15 minutes on hold to TfL before giving up on getting a refund.

She said: "It was only £3 so I just thought it wasn't worth my time in the end.

"But I bet there are a lot of people using the buses everyday that are racking up a fortune."

A spokesman for TfL said passengers were asked to tap in for security and data collection purposes.

He added: "We appreciate this matter being drawn to our attention.

"We’re looking into it, but in the meantime customers concerned they have been charged should contact our customer services on 0343 222 1234 or email customerservices@tfl.gov.uk."

Posted by Editorial at 7:21 PM