Leon Daniels TfL, Send A Copy Of Graham's Email To Your MP

Please see copy of letter to my MP below  - please feel free to cut and paste and use as a template to send to your own MP.
Regards,
Graham Waite.
You can find your MP's email address by simply using Google search page.
Dear _ _ add your MP's name here.
I am a London taxi driver and have held a London taxi licence for over 36 years. My trade has been devastated by Uber who employ over 37,000 (rising by 600 a week) cheap labour to drive Private Hire Vehicles in London.
I have no problem with fair competition but Uber have circumnavigated all the rules demanded of PHV's with the collaboration of Leon Daniels who is TFL’s Managing Director of Surface Transport.
Leon Daniels has in his capacity as Managing Director of Surface Transport for TfL, approved and introduced measures that have brought London’s capital to a standstill, increasing congestion, increasing pollution, costing business and citizens millions of pounds.
He mislead the GLA Transport Committee by stating on record that Private Hire drivers do not need "full time" Hire and Reward insurance policies, that they can purchase "On-Off" Hire and Reward insurance (inferring that it is not necessary for TfL as the regulator to ensure all Private Hire Vehicles are continually insured correctly) See video.
https://youtu.be/R8RRW_0pgmo
The Association of British Insurers have confirmed, no such policy exists. 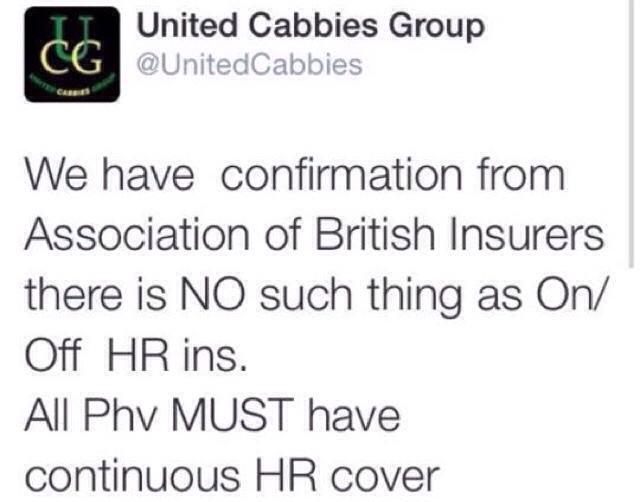 Leon Daniels stated publicly on record in the media that Uber were not using a taximeter to conduct business and then subsequently appointed QC Martin Chamberlain to uphold his view by failing to make the case properly.
Mr Daniels was later questioned by the GLA Transport Committee on record, as to why TfL hadn't insisted that Uber have a manned telephone line, as per the 1998 Private Hire act requires, to which he attempted to obfuscate the issue by telling the GLA committee that the wording of the act is vague and only means that an operator is required to have a land line telephone on the day the license is applied for.
Leon Daniels has now been found to have been in communication via email, assisting Uber UK to word their PR, advertising and complaint responses, so as to mislead the public and further blur the lines between Private Hire and Hackney Carriage and hence place public safety at risk. 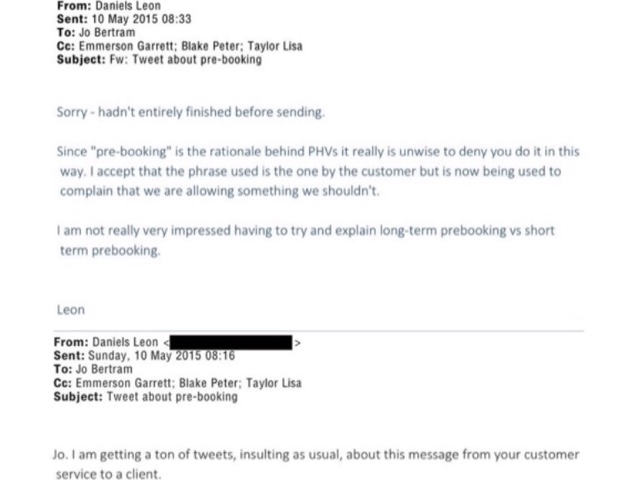 Taken from the front page of the Badge news paper.
I therefore request that you as my MP ask Sadiq Khan the new London Mayor, who has overall responsibility for TfL and it’s actions, to either confirm or deny if Mr Daniel’s has or has not been in direct contact with Uber regarding their responses to various bodies.
I am sure that you will agree, such behaviour if proven, would be in breach of his remit and could be construed as malfeasance and as such should trigger an investigation.
Yours sincerely,
Add full name and full address.
Posted by Editorial at 5:21 AM

Leroy the liar is now bringing in the requirement for scabs to have full H&R insurance...at the end of this May.

They've been here years and only now is it to be made compulsory!

Talk about bolting the stable gate...The bloody horse is sitting in the clubhouse having a beer!

Leon Daniels has single handedly destroyed the World's best city and put the lives of thousands of Londoners and its visitors at risk.

Everybody should send this email to their MP and make sure this Shyster doesn't get away Scott free!

Politics are croocked, politians will always line their own pockets, so the London Taxi Trade is doomed whilst the the pocket liners are in power

Normally I do not learn post on blogs, however I wish to say
that this write-up very compelled me to try and do so!
Your writing taste has been amazed me. Thanks, quite great article.

Quality posts is the main to interest the users to
pay a quick visit the web page, that's what this web page is providing.

I need to to thank you for this great read!! I definitely loved every bit of it.
I have you book-marked to check out new stuff you post…

Hi! I know this is kinda off topic but I was wondering
which blog platform are you using for this website? I'm getting fed up of Wordpress because I've had issues
with hackers and I'm looking at alternatives for another platform.
I would be awesome if you could point me in the direction of
a good platform.

Hey there, You've done a great job. I'll definitely digg
it and personally recommend to my friends. I am sure they'll be benefited from this site.

Excellent goods from you, man. I've understand your stuff previous to and you're just extremely fantastic.

I actually like what you have acquired here, really like what you
are saying and the way in which you say it. You make
it enjoyable and you still care for to keep it
wise. I cant wait to read much more from you. This is really a
terrific site.

After a day of exploring San Antonio (including a fabulous steak dinner on the Riverwalk) we decided to spend our second day in the Texas Hill Country.
We rented a car for the day and drove about 70 miles out to Fredericksburg.

Hello There. This is a really neatly written article. I’ll make sure to bookmark it and
come back to read more of youhr useful information. Thank you for
the post. I will certainly comeback.

Hello please keep us up to date like this. Thanks for sharing!!!

Pretty! This was an incredibly wonderful post. Thanks for providing these details.

You really make it appear really easy along with your presentation however I find this matter to be really something which I think I might
never understand. It seems too complicated and extremely wide for me.
I am taking a look ahead on your next put up, I'll attempt to get the hang of it!

Highly energetic post, I loved that a lot. Will there be a part 2?

What's up, just wanted to say, I enjoyed this blog post.
It was inspiring. Keep on posting!

That is very attention-grabbing, You're a very professional blogger.
I have joined your feed and stay up for in the hunt for extra of your magnificent post.
Also, I have shared your website in my social networks

An intriguing discussion is worth comment. I
do think that you should write more on this topic, it might not be a taboo subject but generally folks don't discuss these subjects.
To the next! All the best!!