Following the recent TfL ruling regarding card payments in taxis, Verifone have now announced the driver packages that come into effect from 2 April.
A new ‘Capital Package’ fee of 3.95% applies to all transactions. The Capital package features:
Zero upront costs
Zero monthly rental charges
Zero data costs.
Drivers do not need to use their own mobile phones as a SIM card is included in the Verifone equipment at no additional cost to the driver.
Card fares normally take 48 hours to process and Verifone pay drivers every day during the week, with the option to schedule just three payments per week if preferred. Jon Wheeler and his team at Verifone are confident that the Capital Package provides drivers with a competitive and accountable solution.
“We looked at numerous financial models before agreeing this package. Drivers don’t want complicated tariffs with upfront costs, monthly rentals or unpredictable extras. Ours is simple, transparent and hard to beat. When you consider the driver support and technical facilities we have too, we really believe that our service is second to none.”
The Verifone transaction rate is reduced to 3.25% for drivers who upgrade to the ‘Icon Package’ with a one-off fee of £299. All Verifone Capital and Icon drivers also qualify for free upgrades to ensure compliance with TfL requirements for equipment to be fixed in the rear and provide passengers who request them with printed receipts.
All services are capable of meter integration, a service that provides quicker job processing and secures customer satisfaction, and is subject to on-going consideration by TfL. Verifone fixed systems have included both receipt printer and meter integration since they launched in London in 2010. 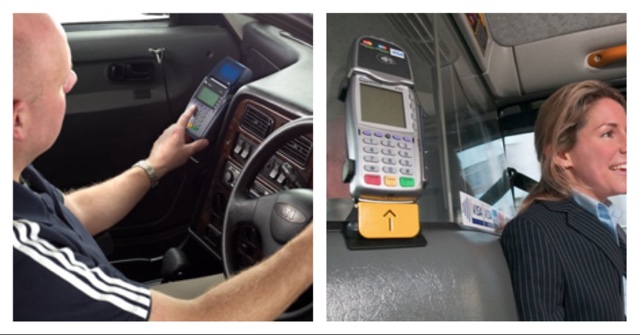 EDITORIAL EXTRA COMMENT:
After initially posting their press release, I received a number of queries I couldn't answer so I gave them a quick call.
How frequently do they pay out?
At present they pay into your account 3 times a week. But you can choose the option of being paid every 24hrs if you wish at no extra charge.
What happens if the meter is vandalised?
Unit is insured for criminal damage by VeriFone as long as you report to police and get a crime number for their insurers.
Where are units fitted?
Both packages offered have two new terminals, one in front for driver and one in rear.
What about receipts?
Driver's unit issues a printed receipt if required by passenger.
Why pay £299 for option two?
The second option is for those users who do mainly cards. The one off payment of £299 reduces the surcharge rate by 0.5%, not a lot, but if you are doing large quantity of cards payments, its well worth looking at this option.
Can I get out of contract?
There is a one off charge, should you wish to break contract within a 2 year period of £299.
What if I buy a new Taxi?
Changing vehicles (say you buy new cab) no problem, this is currently done free of charge.
No signal to terminal?
One of the best attributes of the new terminals is, if you have no signal, the machine completes the transaction for the passenger, then as soon as a signal is eventually found, carries through the transaction.
If a card is subsequently rejected (stolen, cancelled, no funds available), as long as the transaction has been put through in the correct manner, the driver won't lose out and will still be paid fully.
Any more questions?
You can phone them direct on:
0333 66610000
Posted by Editorial at 9:36 AM

why are they hell bent on having a terminal in the back. who pays for the terminal when its vandalised? your insurance and then you loose your no claims. this terminal should be in the front only, this is unacceptable, also what are the contract terms in years because we might end up well out of pocket.

I don't understand why they are forcing us to have a terminal fixed in the back. I also don't know why it has to be connected to the meter. Portable bluetooth card readers like the Cabapp one make much more sense for taxi drivers.

A missed opportunity by Verifone, a surcharge of 3% just 0.95% less would have been a huge PR coup, as this was the figure originally mooted to be the capped charge by
T otally
F ailing
L ondon

the dropping of this cap has been the subject of much displeasure across many trade sites.