A few months back, I began hearing rumours about a West London garage that was apparently renting out vehicles to both licensed Taxi drivers and also to Uber drivers. Whilst sceptical, I decided to put feelers out and within virtually no time, I was being sent info and links revealing evidence of truth...
I hastily contacted Gurinder Dhillon, the owner of Premier Cabs, Indigo Taxis, (Belvedere) and Otto Cars PH but Mr Dhillon was on holiday. 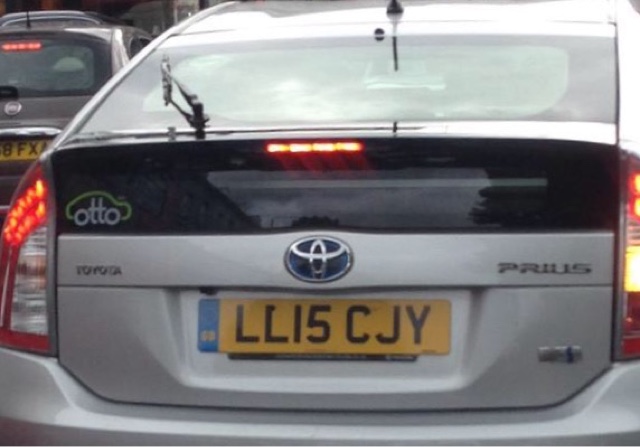 However, his spokesman confirmed the worst and said he would email Dhillon, who would then contact me on his return. He didn't!
On Tuesday 25th August at 3.45pm, I brazenly entered the 'traitors' den with its licensed taxis and Toyota Priuses side by side in the yard and workshop. It would be fair to say that Gurinder Dhillon was not best pleased to see me and very quickly tried to berate me on his perception of my “conduct on Twitter.” 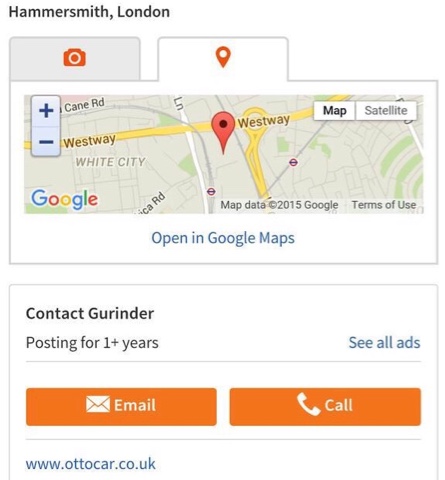 I explained that I was doing an article for Call Sign on his unique perspective of the taxi/private hireindustry and it would be with or without his acquiescence. I hoped it would be with it, but he looked uncomfortable and was rather uncooperative throughout our unscheduled and strained meeting.
Dhillon tried to illicit my address, but had to be content with my mobile and email on his seeming pretence that he needed another week to think about talking to me. He refused outright to be photographed or recorded during our exchanges.
With all his front, he was unwilling/unable to defend what I as a licensed taxi driver would call the indefensible. Mr Dhillon never did contact me. My first impressions of him being disingenuous, disobliging and even dishonourable seem to have been proved correct.
While on the premises of Gurinder Dhillon, I observed unwitting taxi drivers arriving (apparently sent from Westminster Insurance judging by snatches of conversation I overheard) to have Taxi Witness CCTV installed. If they'd had an inkling as to what was going on at Depot Road W12, they might have thought twice before handing their hard earned money over. 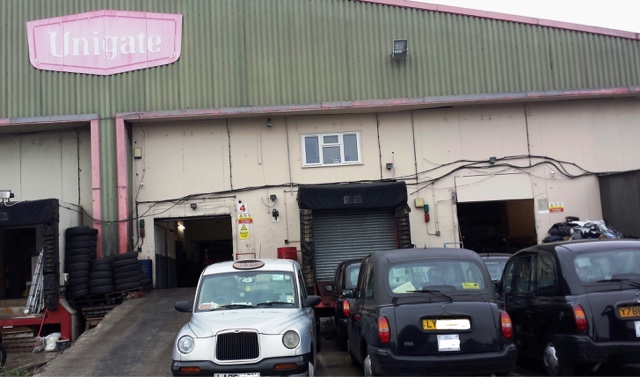 While in the yard, I decided to take photos of cars, taxis and the garage front - with no name sign apart from Unigate (see pic above). But Mr Dhillon took exception to this, ran out and ordered me off his premises. Could his be a man with something to hide?
At that point I decided take my leave anyway.
In conclusion, I must state that Gurinder Dhillon’s disloyalty to the taxi trade is not unlawful; nor is it illegal – even though some might say it was mightily immoral!
Whereas Mayor Boris Johnson and the incompetents at TfL are just inept, Gurinder Dhillon’s activities are more pernicious and fuelled by the pursuit of a quick buck, which makes him culpable in the present 'race to the bottom' - a man willing to sacrifice integrity and reputation for personal gain in the name of business.
It’s now out there and in the court of taxi drivers to make up their own minds. Personally speaking, I could never trade with someone who was contributing to the downfall of my own beloved industry...
Marc Turner (R97)
With thanks to Call Sign.
Posted by Editorial at 12:05 AM

Next article on Radio Circuits and links to PH?

Won't be long before others follow. Cheaper cars at the same rental price as taxis ,even if a 3rd of phv are rented garages will still make as much money as they are now if not more,if there renting less and less black cabs there gonna go into ph if they want to stay open.
The government should just get on with it an say whether they want us or not , stop this long drawn out mess which is ruining people's lives at least we'll know where we stand and can move on. There's Students out there learning the knowledge,some of them have just started by the time they finish there won't be a black cab trade left,and that's another legal issue letting someone do something under false pretences surely that's illegal . If orgs are reading this you need to get moving why are you not taking direct legal action,you like taking our money, is it because you know something we don't and you'd rather keep the money, i thought the roll of a regulator was to regulate fairly, well tfl aren't doing that so there's a court case for you to be getting on with, stop bending us over like tfl and represent us now!!!!!!!!

Anybody who does any business with anything connected to this man deserves what they get!

£10 million a week is collected by Londons minicab firms as circuit rent or commission, Uber have shown TFL how easy it is to control Londons minicabs. Tfl want this money, and they will get it all, TFL will become Londons only minicab fim, ?? 6-7 years away, black cabs for the tourist trade

Well done Marc, good article, drivers should ditch this garage the cabs on the forecourt dont look all that anyway, there are plenty of decent garages around.

Great Article, This isn't the only ''Milking'' of the Taxi Trade that goes on.

All of the Insurers are filling their boots as well.

TaxiPlan - advertise to support the London taxi trade are one of Ubers biggest Insurers, they have the cheek to turn up at all the demos and pretend to be one of us! Bet they are as happy as pigs in shite with all these drivers being licenced every week.

Protector - advertise to be a long establised Black Cab broker but ask for a Uber quote and all the time they have leached off the trade will quickly be forgotten.

These other leaches need to be exposed

Anon 2:12 Absolutely spot on my friend ! There are many many many blood suckers in our trade, that continue to enjoy a comfortable living preying on the blood of the working Taxi Driver.
They remind me of those little birds that live most of their lives picking fleas and small mites off the back of Rhinoceros.
They hardly ever support our demos or our calls for assistance either, which is strange in a way, isn't it?
Semtex.