Bang Out Of Order. Police Go Back On Their Word.

As posted over the weekend, the Met police served a section 12 public order restriction today's demo.
The order made it clear that we could demonstrate along a set rout around the Windsor House building from 2pm until 2:30. 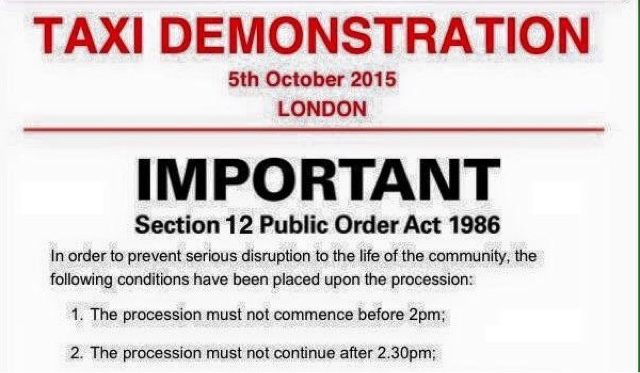 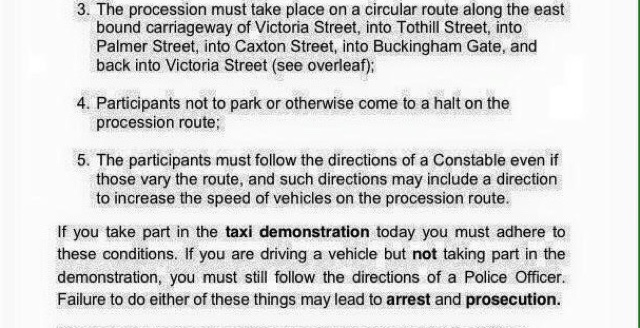 Police go back on their word.
As the demonstration kicked off, Taxis hoping to join in were siphoned off. Instead of joining the demo from Victoria Street Eastbound, Taxis were diverted right onto Artillery Row. But not to be outdone, drivers doubled back until the road was completely blocked -another piece of Met planning making it worse :)- Taxis were then sent north onto Buckingham Gate.
Hurriedly officers from Bronze command, tried to distribute individual section 12 orders, in an attempt to intimidate drivers most of whom just left their windows up and refused to accept.
The order of the day was to kettle Taxis in the Broadway, Caxton Street and Buckingham Gate. The idea being, to keep Victoria Street looking clear.
Complaints were made on site at the actions on the Met Police event commanders, who it appeared were acting under orders to disrupt the demo as much as possible.
A Met officer with a camera was sent along to record the number plate of each driver actually on the protest rout. Another officer then approached  drivers explaining if they failed to disperse precisely at 2:30, then a summons would be issued for contravening section 12 conditions. This was a clear case of intimidation and there was no need for this behaviour from the Met. I caught up with the officer and asked why he was harassing drivers, he then walked away back towards the main road.
Tow away trucks, hundreds of surplus police officers, Met film crews, riot police enforcements, Police helicopter, plus a mobile control wagon.....all this from a force who say they don't have the resources to tackle touting or to remove vehicles parked on Taxi ranks!
Even so, turn out was fantastic. Members of the public were given leaflets explaining our situation regarding TfLs woefully inadequate administration and appeared to give tremendous support to the demo.

I approached the Bronze command inspector and had words about the scandalous treatment his officers were imposing on peaceful Taxi drivers. He said that as there had been no arrests and no incidents, he gave his assurance that no drivers would be summoned.
The police went back on their word of allowing us our right of peaceful assembly and protest and treated us worse than they've ever treated terrorist groups marching across London in the past.
Time to take the kid gloves off?
Should we stop facilitating the police?
In future, I believe we will see more critical mass/flash mob style demos taking place, without warning.
Didn't see too many section 12s flying about at Palestra's critical mass die-in! 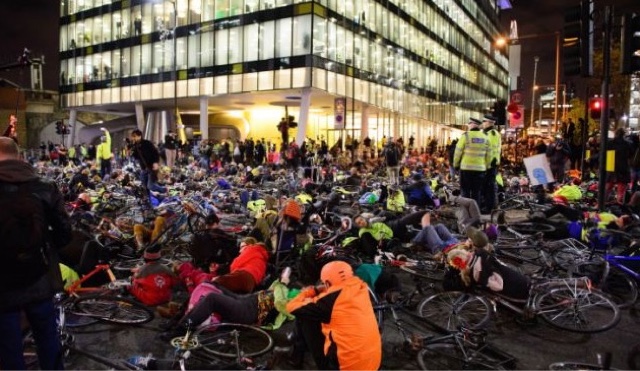 And finally, after:
•Tens of thousands of cars allowed by TfL to ply illegally
• Drivers without proper hire and reward insurance allowed to work as minicab drivers
•Drivers without proper background checks openly touting from taxi ranks
• Compliance and enforcement bigwigs from Operation Neon officers openly touted and broadcast on BBC radio, with no arrests, no licence revocation, no action taken
This, from our caring licensing authority. 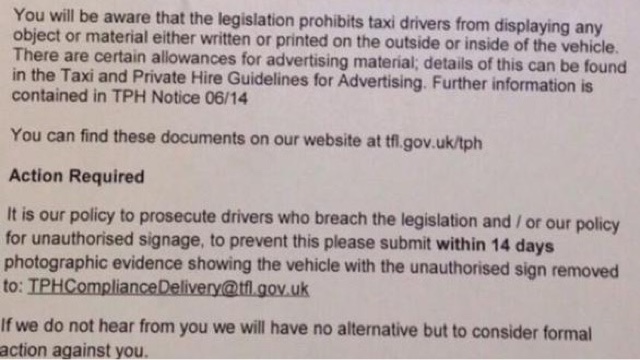 The heinous crime of displaying an unauthorised 4 inch sticker on the rear window, provokes TfL bosses.
Posted by Editorial at 7:15 PM

Absolutely outrageous behaviour by the Met ! A blatant case of taking our politeness for weakness ! Frightened of the Foreigners but bully us from arsehole to breakfast ! Once again, the London Cab Trade the easy nick for the bullying Metropolitan Police. I used to respect their service. And Hogan Howell asking the public to love them?
More than one way of skinning a cat ! Easily done. No more Mr Nice Guy, I say ! Use the back door next time folks !
Semtex.

Surely we can get some legal advice on this from the Trade Orgs? Sections 10 & 11 of The Human Rights Act was breached and we were OBSTRUCTED from carrying out a Legal and Democratic Peaceful Demonstration ?
Let's ask Cherie Blair what the implications are ! She represents everyone else abused and mistreated under the Human Rights Act.
We have the woman Commissioners name on the paperwork from the MPS.
We must have a case here, surely?
If this blatant bullying and wilful obstruction has come from the Mayor, via the MPS, then we have yet another case of him abusing the laws of our land and changing them when he likes? Or have I got it all wrong ?
Semtex

Flash bombs ....... oh and wear middle eastern clothes they wont touch you then

Johnson is fast becoming the most repugnant face of the conservative party. Anti Terrorism Laws, Public Order Laws, Luddite slurs. A total lout throwback from the dark ages. Ask Johnson what his favorite historical moment is and he would probably reply... The Peterloo Massacre Manchester, when the cavalry slaughtered demonstrators with sabres.

As for the stickers in the window, these laws are only guide lines I think is the position TFL have made very clear, so are they guide lines or are they law, TFL like it both ways, ENFORCE THE LAW

surely there's enough ex & current police-officers driving cabs, who can advise how to deal with this disgraceful treatment that's being heaped on us

Our right to protest today was denied by the met. Intimidating us with filming, checking tyre depths and issuing section 12s. The game has changed. We are now treated as criminals. The police state has showed itself in all its glory. Now it will become a real war and we must accept there will be casualties. All because boris and Dave and friends are part of the same club and we ain't innit. No longer will the met have an extra pair of eyes on the street.

Paul, if it's a real war that you want, then flash demos are the answer.

Date and time of the demo should be announced 1 week prior, and the venue just half hour before via Twitter, then see what happens!

I hate to say this but unless someone with a lot of money comes along and takes tfl to court were finished, and even that might not work because in 2020 most vehicles will have to be zero emissions or as low as can possibly be or the country gets a billion dollar fine from the EU and Cameron wants to have the the country in the black by the time he leaves at all costs. Unemployment down and money in the bank!!!!

Start costing them more in police resources than it costs to enforce the law!

Couldn't agree with our colleague Lex, more ! That is exactly the way to do it. Planned by social media, well organised and the venue a surprise till the last minute. It is impossible to control, has the most potent effect and shows the authorities that if they take our compliance and professional politeness as a weakness......then this is what you can have !
If the MPS can deploy all that resource for our demo as they did yesterday, then they can put a few coppers who are over five foot and not scared of monsters or operating in the dark to catch touts out there ! That is of course, if there are any of that calibre of officer left at the Yard these days ! The Metropolitan Police showed themselves right up yesterday ! Two Bob, mate !
Semtex.