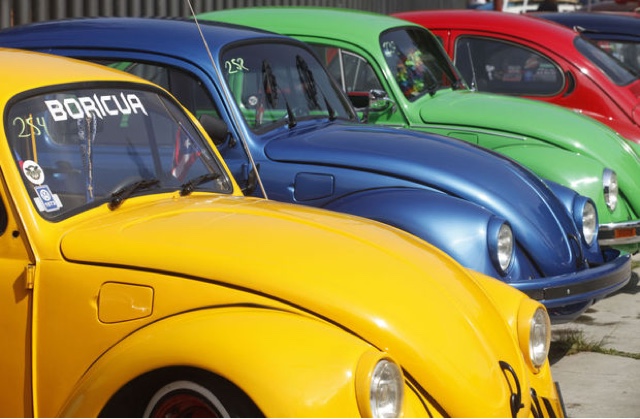 When the Mexico City government retired the last Volkswagen Beetle taxis in 2012, it shipped most of the aging cars, commonly known as "vochos," to junkyards to be turned into scrap metal. 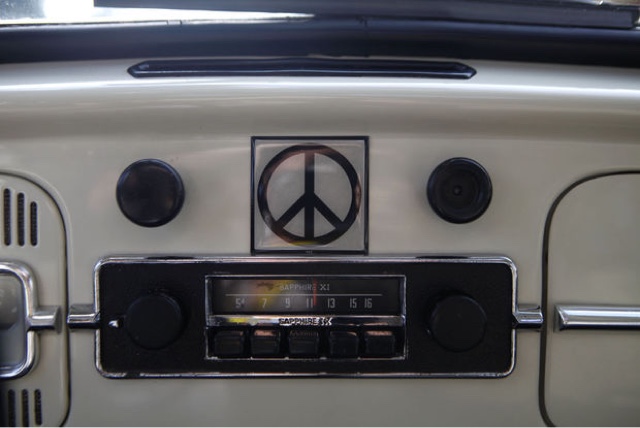 But some of the Beetles, both former taxis and private cars, have found a second life in the hands of enthusiasts like Mario Anaya. He restored his father's 1994 sedan into an auto he named "the lizard" for its metallic-green paint. 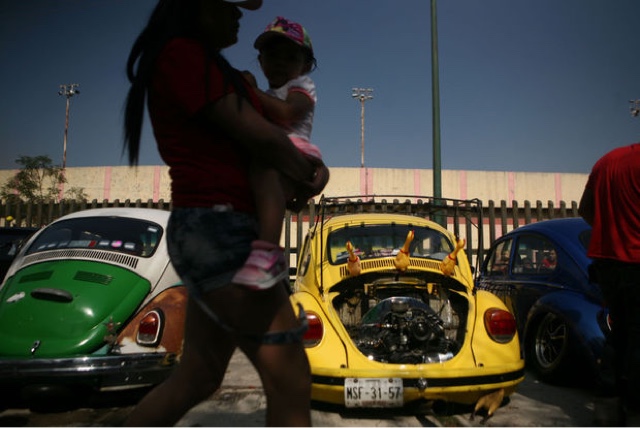 A Volkswagen factory in Puebla, about 80 miles (130 kilometers) to the east, manufactured the old-style Beetles for 39 years, long after the car design had ceased production everywhere else. The last one came off the Mexican production line in 2003. 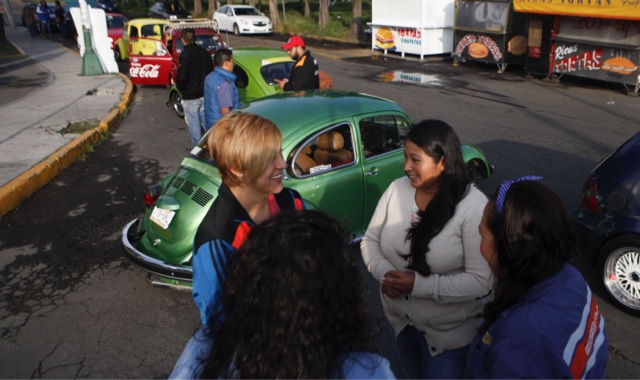 About 50,000 of the green-and-white taxis, many with the front passenger's seat removed, still roamed the Mexican capital's streets at their peak in 2006. But the city's crackdown on air pollution, its fight against crime, and the adoption of newer car models finally led to the vocho's retirement, with the last of the Beetle taxi licenses expiring in 2012. 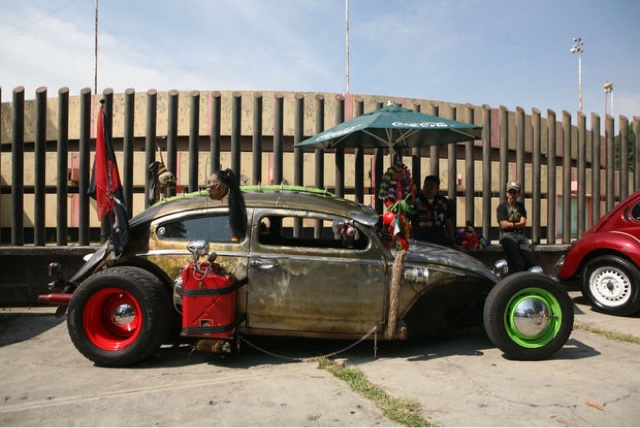 Today, Anaya's close friend Arturo Diaz drives a restored ocean-blue 1965 ragtop Beetle and is president of Xochivolks, a club he founded 11 years ago in the capital's Xochimilco district. 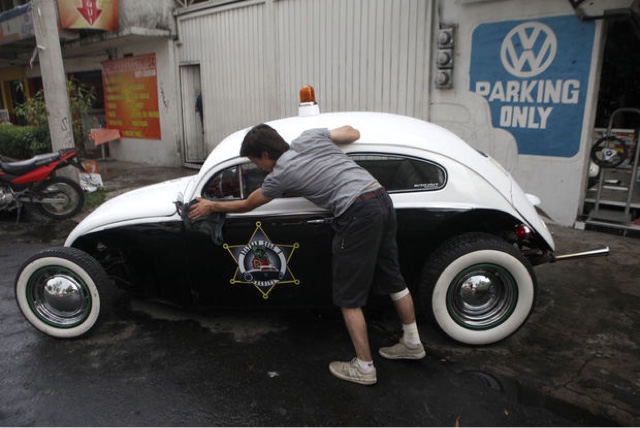 "It is a family thing," said Diaz, who brings his 9-year-old daughter Amiel to club meetings. "The car is mine, but everyone participates, everybody takes care of it, everyone helps." 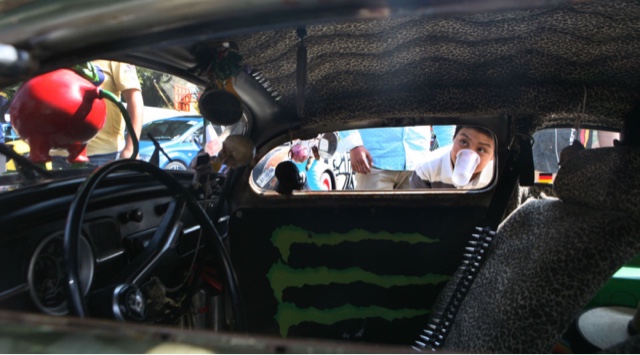 Fellow club member Christian Franco customized his bright yellow 1991 Beetle with toy chickens for his wife, who works in a roast chicken restaurant. Three foot-long rubber chickens are attached to the car's rear, and a fourth appears stuck under the back bumper. 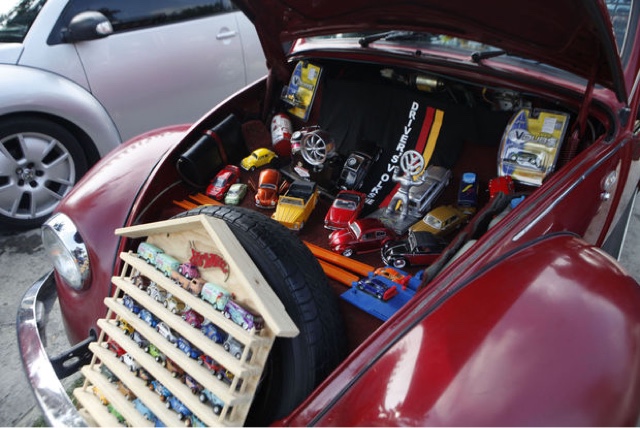 "There's a resurgence of interest in these cars," said Mario Gamboa, a VW mechanic and racing driver for 35 years. "People want to live the dreams of their youth by fixing up a Volkswagen."

Diaz said collectors sometimes purchase used Beetles on a website for second-hand goods, or acquire a used one from a relative, friend, or neighbor. 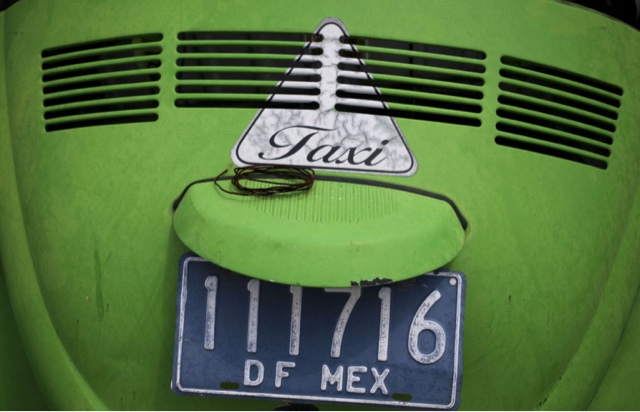 Club members currently are looking forward to a huge gathering on Oct. 25 at Mexico City's Estadio Azteca, with as many as 1,500 customized vochos and 4,000 enthusiasts expected to attend. 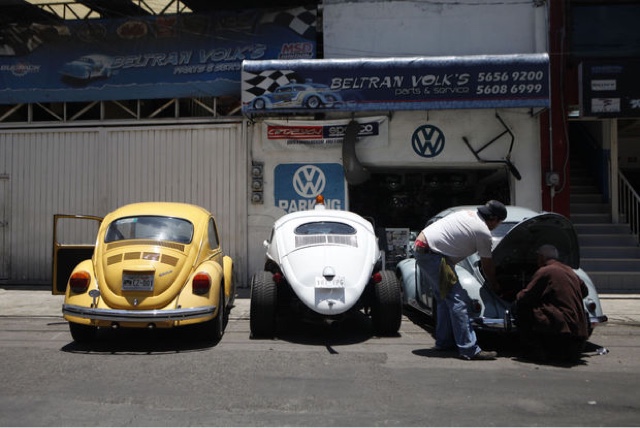 About 40 of the original vocho taxis still survive at the El Coyol scrapyard in the Mexico City neighborhood of San Juan de Aragon.

"We're like a taxi museum," said Miguel Angel Campos, a junkyard employee. Inside the walled lot, behind a green metal gate, the surviving vochos are lined up in three long rows. 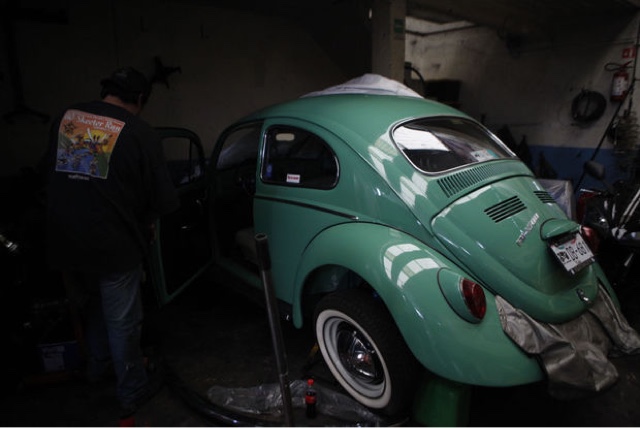 Many of the cars have cracked windshields, dented roofs, and missing fenders. Campos said some were once pirate taxis, or were involved in a serious crime, such as a robbery or killing. Most have not been driven for years. 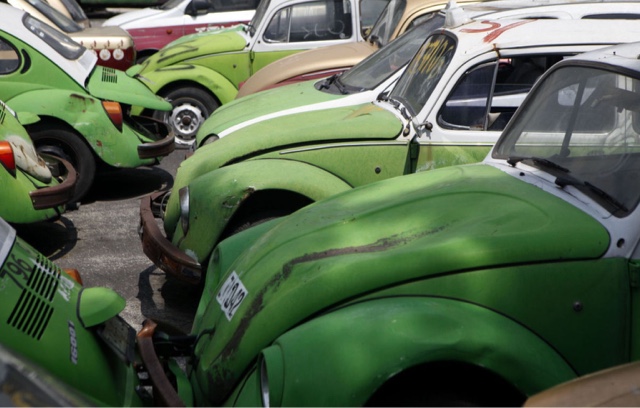 But they are not for sale.

The last surviving vocho taxis, he said, are destined for the car compactor.

Posted by Editorial at 1:18 PM