As The Lycra Clad Army Push On Past The Palace, Cyclists On Queenstown Road Complain At Red Lights. 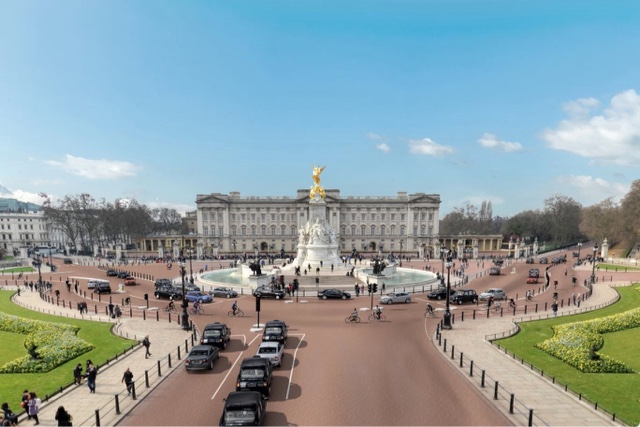 Again we see another artist impression, void of the congestion this new facility will creat.
After receiving a royal blessing, Boris's Super Cycle Highway will now push forward, putting removable bollards along Constitution Hill and across the entrance to the Mall. The wonder Queen Victoria Memorial was once one of the most beautiful gyratories in the world, now reduced to an eyesore of traffic chaos.
Regardless off the fact they already have a segregate rout, Boris said cyclists refuse to use the old path as they wanted to express their right to use road space along with other vehicles. Not content with sharing space with other road users, cyclists want sections segregated off, squeezing the motorised traffic from the current three lanes into two.
The old cycling rout takes them pleasantly onto the fringe of the park, previously used by horses. But, to navigate round the QVM and across the Mail, cyclists would have to dismount to use the pedestrian crossing.
How demeaning it must be, dressed head to foot in Lycra, wearing hats adorned with Go-Pro cameras, having to walk the 50 feet, in upmost safety across the traffic lights, guarding the entrance to the Mall.
Look at the congestion caused at admiralty arch. Traffic often tails back down the Mall, after cyclists were given one of the two lanes leading into Trafalgar Square (causing a massive bottleneck). The common sense approach would have been to ask cyclists to dismount, twenty feet from the arch and continue as pedestrians, remounting on the other side...but alas this was seen by the Lycra brigade as unthinkable.
After all the cost involved with the changes to the present set up at QVM, will cyclists actually use it ?
At present, there are no laws in place to force them into the segregated road lanes. We have recently found with the roundabout on Queenstown Road, if they don't like it they won't use it.
..
Cyclist are now complaining they have to wait too long at red traffic signals, something many are not used to. So the majority are ignoring the new facility.
No like'y, no ride'y.
The way the Mayor has cow tailed to the cyclists we can e lecture a quick tweak of the signals phasing with motorists paying the price and waiting longer at their reflective signals.
It will be interesting to see just how many cyclists refuse to use the CSH along Victoria Embankment when it finally opens.
Posted by Editorial at 2:42 PM

If there were ever a prime example of abject incompetence, Queens Circus Queenstown Road is the jewel in the crown. Has the Pratt that designed this traffic nightmare been tested for drugs ?

Hello, I enjoy reading through your article. I like to write a little comment
to support you.