Just when you thought stupid couldn't get anymore stupid, Camden's Phil Jones decides to “reallocate road space from cars to cycling” on Torrington Place, the main westbound relief route into Tottenham Court Road is to be given an extra cycle lanes, that's one in each direction with vehicles squeezed in the middle.
Traffic flow in this area was reduced to constant congestion when the first phase of the scheme saw Torrenden Place restricted to one way westbound traffic, to facilitate a two way cycle lane. The situation has recently deteriorated as south bound traffic on Hampstead Road wishing to join Euston Road east bound is now needlessly diverted around Gower Street, turning right into Grafton Way, right into Tottenham Court Road where eventually Euston Road East bound can be accessed. The added fuel used by vehicles diverting and congestion caused has seriously impacted the air quality at this junction. 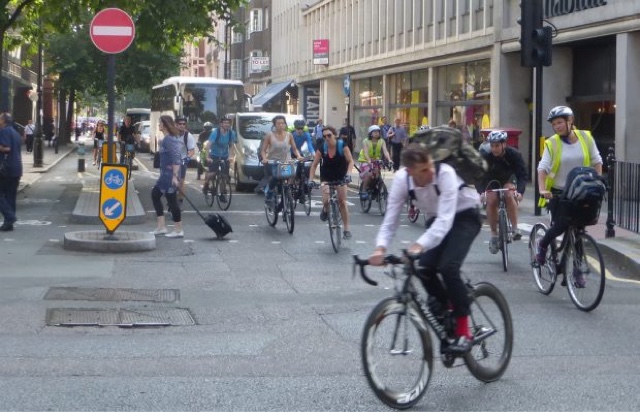 Camden Council is now to experiment with a new traffic system along the east-west cycle route linking Fitzrovia, Bloomsbury and Kings Cross to address concerns about motor traffic volume and road safety, before starting work on its major West End Project.

Cyclist Councillor Phil Jones, cabinet member for transport, is due to sign off a decision this Wednesday that will allow a 12-month trial of the changes.

Jones said the trial “will reallocate road space from cars to cycling”.

During its West End Project consultation Camden was severely criticised by residents groups in Fitzrovia because of the predicted increase in westbound traffic caused by changes to Tottenham Court Road. 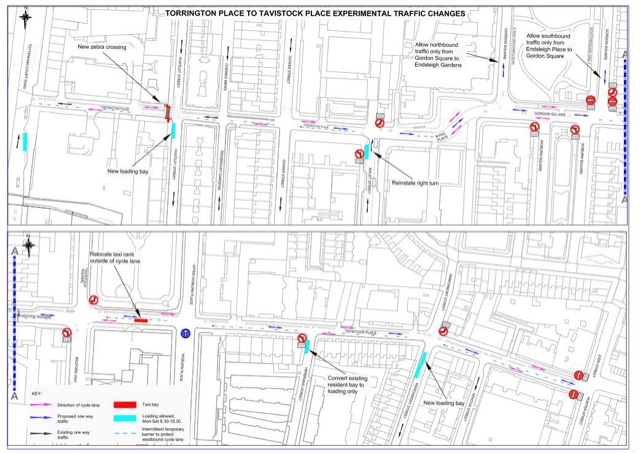 Concerns centred on the projected doubling of motor traffic in Torrington Place because of restrictions on private vehicles and taxis on Tottenham Court Road after completion of Camden’s West End Project.

However, residents on the western side of Tottenham Court Road are also concerned about increase traffic in Charlotte Street and other streets because of Camden’ West End Project. Camden has yet to announce any plans to address these concerns.

On 1 June 2015 the High court of Justice refused an application for judicial review brought by the Licensed Taxi Drivers Association (LTDA) against Camden Council. The LTDA had argued that Camden had not followed proper process before coming to a decision on the West End Project transport changes.

The High Court will however reconsider its decision at a hearing in open court on 1 July 2015 after a request by the LTDA.

Posted by Editorial at 2:04 PM

Is this bloke for real? What does he think will happen when this is implemented ?He should be reminded of what happened when Monmouth Street was reversed,GRIDLOCK 20 hours a day.But idiots like him get off on causing chaos.We should have another 50,000 Ubend Tax credit merchants by then so the whole of London will ruined,and to think this knob earns a right good wage!God help us.

I'm afraid this guy is very much for real. Gridlock for motorists, as cyclists, in spray on lycra, flaunt their way past, is exactly what local activists crave. Pollution is a small price to pay to indulge their vindictive hatred of the motor car.

God ain't gonna help us, no one is. Even some cab drivers ain't gonna help us. I was on the demo yesterday as drivers picked up around me, and drove through me with jobs in the back. They used the demo to exploit the lack of cabs to make money. We campaigned to save their jobs and they morphed into ' Collaberator Cabs' , well done chaps. I have disagreed with some demos in the past, rather than betray my peers I find something else to do.

Getting old isn't all bad, but sometimes it grants a detached wisdom that only comes with age. I look around, and I remember the words of Robert Zimmerman, ' you don't have to be weatherman to see which way the wind blows..'