Editorial Comment:
The statement below is from the Mayor's office and it proves that Boris has always known where the troubles that affect the London Taxi trade lay.
He has done nothing about these issues before.
TfL are worried that militant action being planned will escalate and eventually the truth will start to drip feed into the main media. By their own rules, if you throw enough mud, eventually it will stick.
Yesterday's statement was no more than a scripted PR stunt to try to appease and put off demonstrators.
Prepare for more spin to come out over the next week or so, which will try to fragment the trade even more than has been managed in the past.
We are at present very close to full trade unity and Hendy's administration are bricking it. 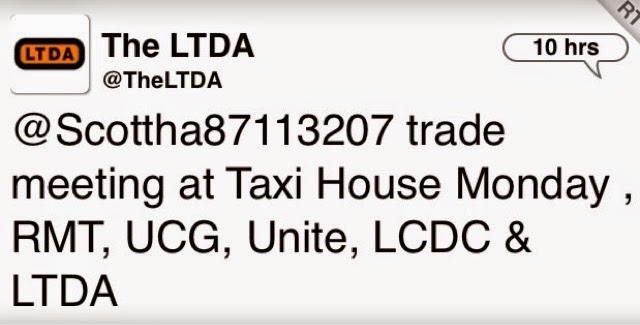 It has not gone unnoticed that certain Directors at TfL have disappeared from public view of late.
It has recently been alleged TfL may have acted unlawfully and evidence is now surfacing to back up these claims.
The GLA enquiry has bought us forward to a point, but as the only power the GLA have is to make recommendations, we now need to take this further. TfL needs fully investigating at Parlimentary level by people who have power to bring top TfL brass to book.
Boris's Official Satement On GLA Website.
The Mayor of London, Boris Johnson, yesterday pledged to push for new powers to enable him to cap the number of Private Hire Vehicles in the capital.
The Mayor has also confirmed he will be seeking powers over unsafe and unregulated pedicabs and rickshaws on the streets of London’s West End.
The Mayor, who has received clear advice from Transport for London, will be pressing for Primary Legislation from the Government to enable TfL to cap the number of Private Hire Vehicle drivers operating in the capital, which are rising by more than 1,000 each month.
Currently there are 78,690 minicab drivers in London and over the past year that number has risen by 12,268. At this rate, over the next two years, there will be an additional 26,526 minicab drivers – bringing the total number to more than 105,000.
The growth of private hire vehicle drivers in the last 18 months (from December 2013 to date) is approximately 18%. The Mayor is concerned that this unprecedented rise in numbers is causing increased congestion, particularly in central London, as well as more pollution and problems of illegal parking.
The Mayor is of the firm view that London must be able to cap the number of minicab drivers – however, currently Transport for London does not have the ability to do so. He will, therefore, be seeking legislation to give the capital that power.
In a separate move, the Mayor will press to obtain powers over the regulation of pedicabs. The Mayor believes these vehicles jam up roads in the West End and unnecessarily and consistently fail to ensure the safety of their passengers. Uniquely, London is not currently able to restrict or regulate pedicabs in any way, unlike the rest of the country.
The Mayor of London, Boris Johnson, said: “We must be able to take action against the threat posed by the massive increase we are seeing in the number of private hire vehicles. There are only 25,000 black cabs and 8,000 buses in London and yet there are already over 75,000 minicabs and rising. We’re starting to see a threat to free movement of traffic on the roads.
“What we are proposing therefore is legislation, which I will be looking to take forward in Parliament, to restrict the number of minicabs that can come on the streets.
“We will also be seeking powers for TfL over pedicabs – which so far have been completely immune from regulation. These vehicles jam up the roads and consistently fail to ensure the safety of their passengers.”
Increase in private hire driver numbers in recent years:
2009/2010 59,191
2010/2011 61,200
2011/2012 64,063
2012/2013 66,975
2013/2014 65,656
2014/2015 76,249
Examples of traffic/parking congestion spots include:
West End (Piccadilly, Mayfair, Leicester Square) during Thursday, Fridays and Saturday nights and residential streets around Heathrow.
Particular streets/locations include:
St Pancras International
Dover Street
Berkeley St/Dover St
Piccadilly/Shaftesbury Avenue/Swallow Street and Wardour Street
Portman Square and Grosvenor Place
Knightsbridge/Hyde Park Corner
Edgware Road/ Marylebone (includes both Praed Street (Paddington Station), Star Street, Bryanston Sq and Marylebone Road).
Charing Cross Road/ Leicester Square
Camden High Street
Greenwich around 02
Clapham High St
The Mayor is seeking to include the legislation in a London Bill in this year’s Queen’s speech.
TfL currently has a major private hire review ongoing and will start making changes later this year. This includes an English language requirement and better geographic knowledge requirements for minicab drivers.
Tfl is also increasing its enforcement against touting and other illegal activity, working with the Metropolitan Police Service to target known hotspots and better responding to real-time information to take swift action against touting, for example.
Ends.

Posted by Editorial at 3:42 AM

We need to watch this clown very closely. Don't like the mention of a mini knowledge test for the scabs. I smell a rat here. We will have to watch Boris because if he starts passing laws for scabs it won't take much to stick a few lines in saying scabs can ply for hire from appointed ranks in London. How many times have they sucked us in only to shoot us in the face. Let's face it our unions are idiots- remember who agreed to the illegal age limit - remember those grinning idiots at the last supper who sold us out. Our real problem is that we don't have a leader to unify us and lead us through these troubling times. More importantly somebody who who would represent our trade and protect our interests. Is there anybody out there???????

Steve burton ,that useless head of Compliance was out on the street in Mayfair last night with six compliance teams and two unmarked police cars.TFL seem to think that their presence for once will do the trick to stop our street action at Windsor house.This MAN and many of his Directors need to be CHARGED with obtaining money by deception from the PUBLIC PURSE,for not doing the JOB they are paid for.They need removing from office immediately.There are plenty TOUGH ex Police officers aged 48 available to do this job having retired from their units after 30 years service who would love a simple challenge of enforcing Hackney Carriage and Private Hire regulations.

I'm suspicious with all the terminology used by the Mayor.

Even his often recited use of "the gold standard" when referring to the taxi trade is indicative of, pay a bit more, but there are plenty of alternative options.

Ok, I might be cynical but he is so disingenuous.

A definite NO to a mini knowledge.

Yes, to a three year minimum period of residency in the UK so a proper police check can be made on drivers history.

But - and this is significant - Uber did not meet criteria to warrant issuing them with a private hire operators license in the first place.

One thing that he does not mention is the instant hail which is currently in operation by those using smart phones.

That needs some real consideration

Tony Casey spot on this is our business and we should have the right to police it ourselves so let us get our own compliance team .

No matter what TfL say, they DO have powers to enforce a cap on the number of PHs. They can demonstrate there is an "Irrational over supply" (thats a legal term from a Barrister I drove around) of PHs, that was two years ago... In continuing to allow more and more PH on the street they are acting irrationally as there is clearly already an over supply and hence no requirement. They (TfL) will argue that they cannot stop someone from working, by that logic, guys pick a job you fancy doing, (maybe head of a government dept or dentist) and tell the government you want a job as an NHS manager and it's against your human rights not to be allowed to work.

NO ONE IS SAYING THEY CAN'T WORK, there are more jobs int his world than driving a mini cab. BUT I think you will find the number one job in London in receipt of working families tax credits is a PH driver ! it's a scam, they are hiding the unemployment figures and we are paying the price.

If they can stop yellow badges in certain sections them they can stop PH licences right now. Smoke and mirrors from the clowns again