City Hall was mashed out this morning, as London Taxi drivers packed out the gallery for the GLA's Transport Committee sitting to challenge TFLs Peter Hendy about their lack of positive management of Taxi and Private hire industries.

Chair of the committee Caroline Pidgeon, asks drivers in the  gallery not to protest and to let the committee question Sir Peter Hendy about their concerns.

She added, that she hoped to get detailed and heavyweight answers from Hendy. 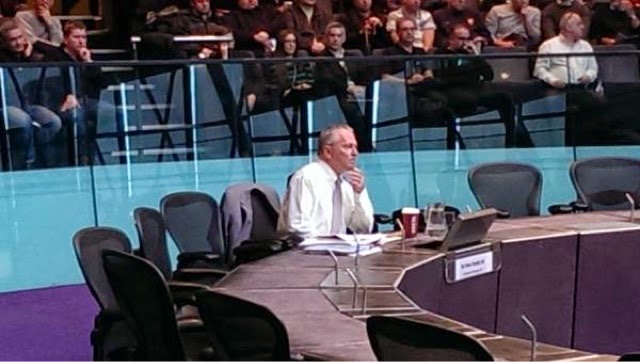 "Sometimes it's hard, as most laws are over 200 years old", he added "some trade concerns rise because the Assembly have pressed for more cycling & cleaner air".

It seemed Sir Peter laid most of the current problems being experienced, at the feet of the Assembly.

Hendy said Smart Phones had revolutionised the way things are done and what Londoners seemingly want. He said TfL had no plans to develope an industry wide app, it's a trade issue.

That's quite reassuring, after the mess TfL made of the CabWise app. 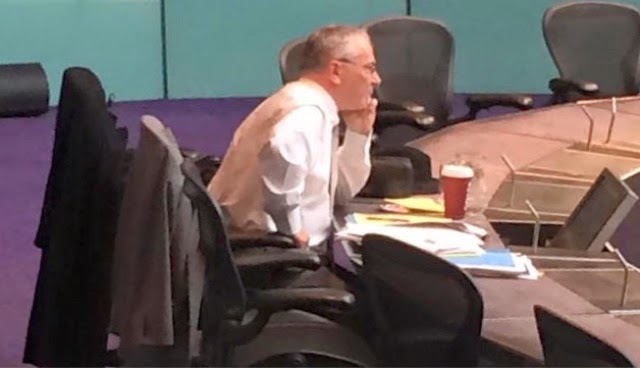 He went on to say people wanted to lay by credit card and that he couldn't stop Uber price surging. Again he stated that the trade needs to modernise.

Asked about recent stories in the papers he said "I don't believe anything that's written in the newspapers, including quotes from myself. The Taxi trade deserves a good future."

His claim that the Taxi trade was expanding prompted laughter from the gallery.

There was huge applause for Val Shawcross when she suggested senior TfL management were "out of touch" with the Taxi trade.

When asked about Boris Johnson's contact with the cab trades, Hendy said "The Taxi trade get more meetings than train and bus drivers get."

When questioned about openness, Hendy promised to speak to Boris about publishing minutes of his 'cabbies cabinet' sessions.

Speaking about  the trades "fragmentation"  Val Shawcross drew applause from the Cabbies suggesting there needed to be a clearer trade voice. Hendy agreed saying"It wouldn't half help if you could get some consensus." 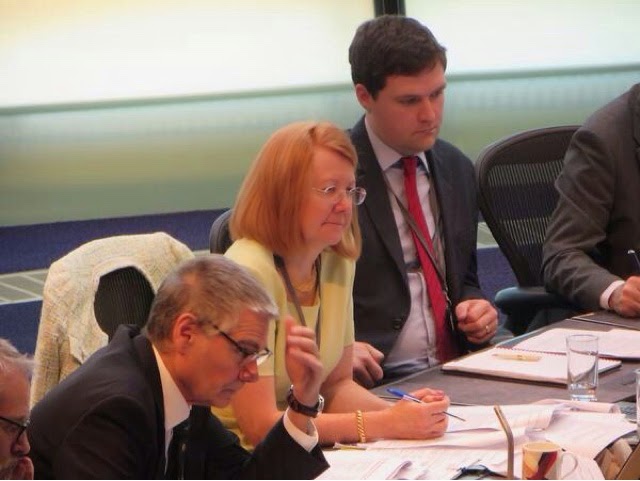 Victoria Borwick asks about having an AM attend the cabbies cabinet. Hendy says he'd "convey" the suggestion. Val Shawcross came back with, "rather than just convey, will you recommended it to him". Hendy says "on reflection" he will.

On displaying some kind of marking of PHV, Hendy says he supports and will look at it again, but in the past DVLA & DfT weren't keen last time it was explored.

Taxi drivers heckled when he said he needed to take account of views of executive car firms who wouldn't be pleased with a mandatory scheme.

The committee moved on to enforcement, Hendy read out a well prepared list of figures from TfL's website. 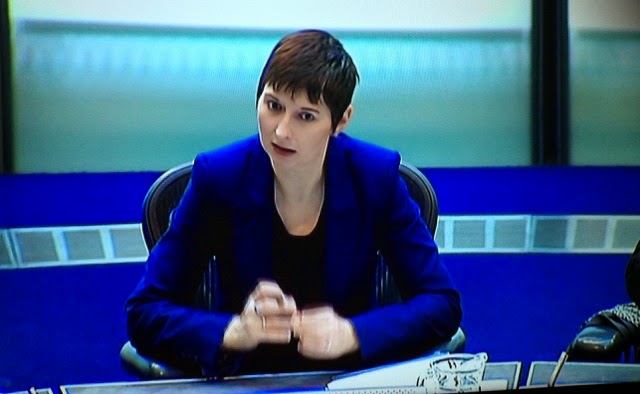 When asked about enforcement of Pedicabs, Hendy said there was none due mainly to court ruling and stated that new government rules would make it even harder to deal with electric rickshaw bikes. He said he wants the power to licence Rickshaws and has asked council to draft a private members bill to be presented to Parliament in May this year.

When asked about mini cabs and touting Hendy said "it's harder to prove than assumed", to loud groans from the gallery.

The question that most cabbies had come to hear about, Uber.

Hendy said TfL had asked a top QC if the app was a meter and was told it wasn't. Hendy then told the committee all about the Uber/TfL/LTDA court cases and added as a regulator he's happy to enforce any court ruling or law.

There were cheers and loud applause when Victoria Borwick said "we don't want Uber in London".

Interestingly Hendy said he had recently booked a Hailo Taxi using their app, where Hailo had said they couldn't send him a Taxi but instead offered him a mini cab which used an iPhone to calculate the fare. As a result of that trip, TfL have written to Hailo, asking for into about how the fare was calculated.

Sir Peter said he's been accused of taking bribery & backhanders, but added he doesn't like Uber and that they were not nice to him!

Deputy Mayor Victoria Borwick received huge applause from the gallery when she said taxi drivers have put 2 years into their trade, are disability aware & accessible & deserve support. She added "As a city, we have to decide what we want."

Hendy argued he has to deal with operators within the law, changes need legislation. He said some drivers just want to drive, but they have to adapt & embrace new tech or others will. He added that any new laws need to be "Future Proof". 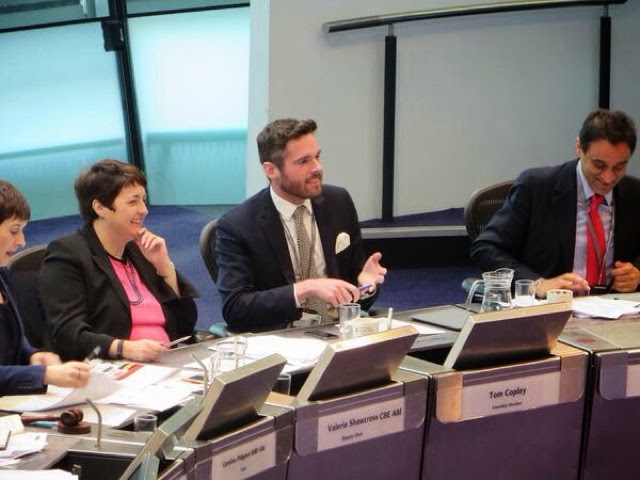 Assembly Member Tom Copley got huge applause when he asked why TfL had stopped after getting just one legal opinion on Uber's legality. He said they've had been "soft" on Uber.

Hendy said this wasn't the case and that TfL wanted a court ruling to decide the issue definitively.

When asked if he would publish their legal advice on Uber Hendy said he would.

So where do we go from here, what next?

Taxi leaks would like to thank Chairperson Caroline Pidgeon and the whole of the GLA Transport Committee, for their continued support of the Taxi trade.

One other thing Sir Peter mentioned, Uber intended to bring other practises to London (he didn't elaborate). He just said a warning had been put on their licence that they would be clearly acting illegally and would be revoked. He also said they already had a warning over driver with serious convictions.

Yet wasn't it TfL who authorise a wife killer fit and proper to do the knowledge a few years back?

A man who already held a PHV licence, having previously served time for killing his wife. Apparently as long as he took his medication TfL said the public were perfectly safe.

When asked about the backlog of 77 rank requests Hendy said there was lots of competition for road space but £600k had been put aside for Taxi ranks. When asked if TfL would work closer with boroughs to make this happen, he answered "We'll come back in 6 months and see where we are on this".

We have been informed that Sir Peter Hendy complained about the behaviour of the Taxi drivers in the Gallery...but only after they had all left the building.

Apparently the TfL Transport Commissioner had to be warned about swearing as a group of school children had taken seats after the cabbies had left.

Mayor Boris Johnston published a press release today, saying that TfL would invest £600,000 to raise the number of cab ranks by 20 per cent by 2020 - expanding the network to 500.

At present there is only one taxi rank per 100 Taxis. The new move from the mayor aims at increasing the ratio to one rank per 50 Taxis

TfL says it will ‘undertake a strategic review’ of rank provision across London – which will be completed by early 2016.

If you couldn't make to the meeting this morning, sit back and listen to this recording made by Super Cabby Jamie Owens. Podcast is approx 1.5 hours long.

Well Sir Lunchalot, the usual diet of excuses and blaming all and sundry except yourself, the Mayor and your spineless legal team.

Glad to hear you don't beleive anything you read in the papers, we assume that includes TAXI and The Badge.

Looks like you need to rely on good old TaxiLeaks then!

Going down fast, nightwork disapearing , lights everywhere punters hailing scabs with a mobile in their hand!! Are we to be shunted into the burbs with 24 hr tubes?? Give it another 8 months wont be no money in the job!! What next from orgs??????

Watched the webcast and again the trade orgs failed to get the message across to the GLA
Not one word about the definition of pre bookings and the fact smart phone apps are operating as immediate hirings.

Having seen TfL's legal advice about Uber, it was signed not by an "eminent" QC, it was just an investigation from a general council!

By their own admission, the club and the LTDA were in possession of this report but failed to get it over to the transport committee.

Gerald, if this is true, then HENDY told a lie to the GLA committee.

Also left out from the meeting:
Illegal Satellite offices
Unlawful acquisition of Licence variations by firms such as RD2
Clipboard johnnies
And Emmersons 400 cab enforcement officers.

Even Jenny Jones, who'd love engines to run on yoghurt was with us

"When asked about enforcement of Pedicabs, Hendy said there was none.... He said he wants the power to licence Rickshaws and has asked council to draft a private members bill....."

Have I got this right: he's going to legitimise them so there is no longer a problem with illegal pedicabs because it's easier than enforcing the law?

Why as no one contested that a app from a mini cab is a hail to which I fought that this is solely for a licensed taxi.

Just like the suburban review another waste of time

Anyone know where the ranks action plan and the surburban action plan live? Can't find em in the quagmire that is TFLs website. Published today according to this meeting??????????

Who gives a fig about rickshaws breaking every traffic law and putting people s life's in danger , but we must get our cut out of it. ..

Rickshaws Licensing is all about revenue not banning.
Licence Rickshaws so tfl can get £300 + every 3 years and PCNs for illegal parking.

ITS ALL ABOUT MONEY