IS THERE A DISTINCTION BETWEEN WHAT IS AND WHAT IS NOT REGARDED IN LAW AS ‘PLYING FOR HIRE’?

A Briefing from Tim Noris, solicitor with Woodvine solicitors, specialising in Transport Law and Licensing.

Demo, Demo, Demo: Up goes the cry and up go the posters! By Spartacus.

Yes we have been 'stitched up' by TfL  (is that news?) who again treat us with contempt. 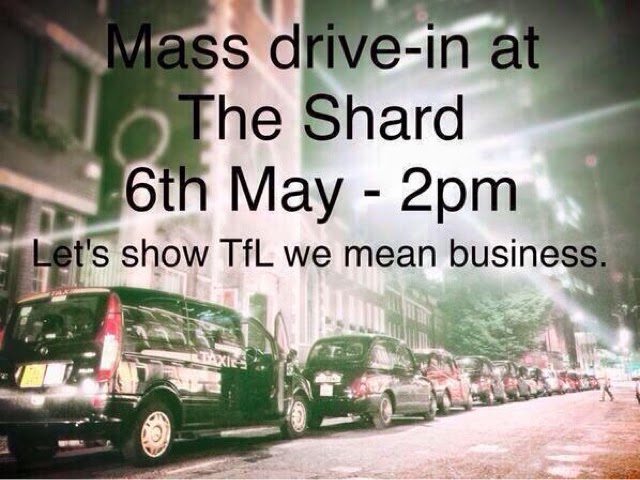 When you call for action, you have to have objectives to achieve.
The key questions are:
What exactly is it we settle for?Is it a permanent rank for 6 cabs outside the door and NO minicab waiting area?
Seems a reasonable outcome
The next question for the 'organisers':
What next if TfL refuse?The obvious answer is more action, once a week on random busy nights on a 'flash mob' basis until we succeed.
Still in relation to the threats that face the trade with bigger ones in the pipeline, deregulation, Über and the continued hostility and incompetence of TfL.
The Shard despite all it's height is small potatoes.We have seen what the trade unions can do in parliament this week, we need more of the same there and at the GLA.So Shard organisers, are you up for:Asking for support from all trade groups?Continuing action until victory is achieved?Refusing to talk to TfL unless all trade groups are there and our just demands are met?Joining a campaign to ensure the upcoming GLA led enquiry is thorough and call for the transport committee in parliament?If not the demo will be (as many suspect) little more than a PR stunt that's all carefully choreographed from elsewhere.
I truely hope it's not the case.PROVE THE DOUBTERS WRONG, or CONFIRM their misgivings.
OVER TO YOU LCDC?I for one would be happy to give you the credit if that happens.I'm Spartacus

Is The Shard Just The Tip Of The Iceberg?..by Jim Thomas.

TfL have declared war on the Licensed Taxi Trade and announced the first minicab bay/rank, at the Shard.

When I held the position of ranks and highways officer at the RMT, I explained to a packed branch meeting, that minutes to a surface transport meeting document had been found which laid out plans for future ranks for private hire. Shortly after the meeting the document was removed from the Internet.
Unfortunately only a online link to the document was kept. We didn't have the foresight to make a hard copy as the proposer (Jerome Weimar) had by then, gone from TfL. We thought that would be the end of the matter.  But as we now know to our cost, nothing ever gets completely scrapped by TfL. Proposals get shelved and re-emerge at later dates.
We now see it's TfL's intention to restart the implementation of this damaging idea.
And the Shard is just the tip of this iceberg, 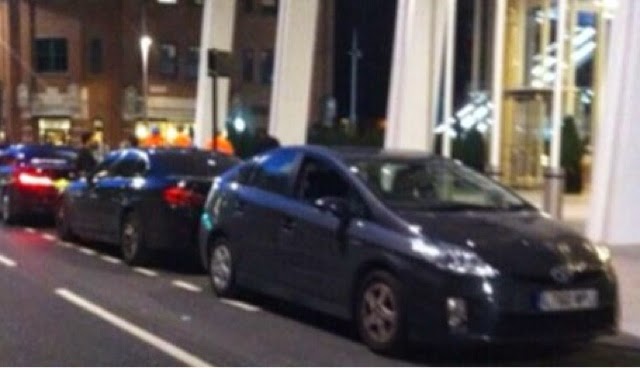 The Shards new minicab rank
So now the United Trade Group are crying "Foul" and calling for united trade action.
But just how sincere are these people and can we trust them?
Surely now the engagement policy has been scrapped, there is no reason whatsoever for the LTDA, LCDC and Unite, to exclude the RMT and the UCG from the joint ranks, or any other united trade committee.
Stephen Hammond, Parliamentary Under-Secretary of State for Transport, in the Westminster debate on deregulation said:
I hope that in the few minutes available to me I have been able to demonstrate that the Government have considered the measures carefully. They are pragmatic amendments to the Deregulation Bill. They will allow substantial scrutiny in Committee and will reduce the burdens on the taxi and private hire trade. They are effective and safe steps along the longer deregulatory journey.
He couldn't have made it any clearer.
The Government want to deregulate the whole Taxi trade nationally, including London. They want to work closer with Private Hire. If we don't act soon, our days will be numbered.
Boris had said in his election promise:
"London is different"
He also promised not to close the tube ticket offices.
The RMT made this statement after the Westminster Debate.
The RMT, GMB AND UNITE have agreed a tri-union coalition and informed all their relative parliamentary groups briefing MPs on that deregulation bill debate.
Only trade unions with serious clout can do this. If the trade is to survive, drivers must get behind the call for total trade unity.
This begs the question, if the unions can work together on a national basis then why is there such reluctance in London?
Bob Oddy, Grant Davis, why won't you engage with the RMT and UCG?
We want to know why certain Taci drivers can't sit down with other Taxi drivers and work together.
Our future is in the balance.
This must not be about personal agendas. 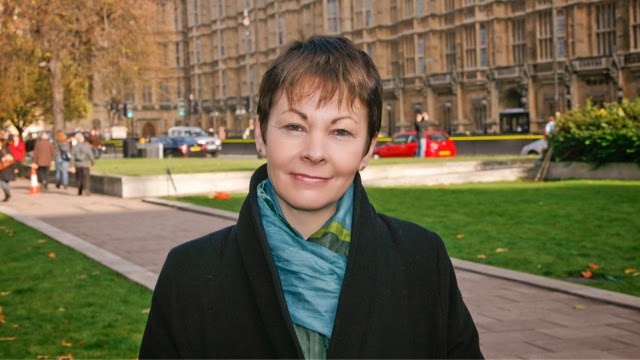 Green MP Caroline Lucas has questioned whether a donation to the Conservatives made by a minicab firm owner is behind changes to Taxi and private hire regulations.
She told a debate in Parliament that a £500,000 donation made by Addison Lee chairman John Griffin may have influenced the government's policy.
Annual checks on minicab licence holders are to be replaced with reviews every three years under ministers' plans.
But Addison Lee "categorically" denied any attempts to influence legislation.
And a spokesperson for the Department for Transport said: "This is a bizarre claim, perhaps based on a misunderstanding of the proposals, which apply only to Taxi and private hire services outside London.
"They would therefore have no impact on Addison Lee's operations, which are within London.
"We believe our proposals will have a discernable and beneficial effect on the Taxi and private hire trade and for passengers."
But a spokeswoman for Ms Lucas responded that Addison Lee bosses had told the Evening Standard in 2013 that they were keen to expand the firm to other cities in the UK, so there was nothing "bizarre" about suggesting that deregulation of minicab firms outside London was in their interests.
Ministers have pre-empted a review of Taxi and private hire regulations by the Law Commission and included the changes to Taxi and private hire regulation in the Deregulation Bill currently being considered by Parliament.
Speaking in Westminster Hall, the Commons' secondary debating chamber, Ms Lucas said questions needed to be asked about why such "potentially dangerous" changes were being "rushed through".
'Political agenda'
And she questioned the role played by Addison Lee and its chairman John Griffin.
"We know there's good money to be made from the taxi and private hire vehicle or minicab industry," she said. 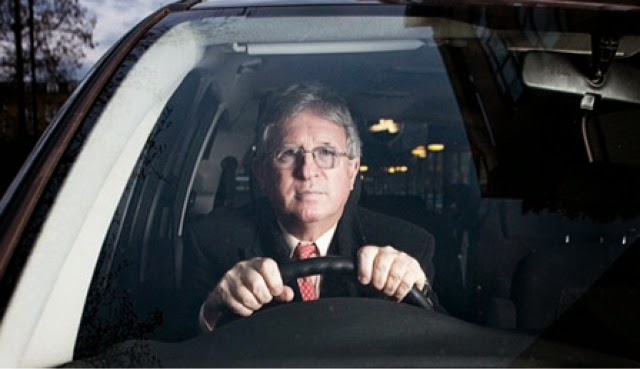 Mr Griffin gave £500,000 to the Conservatives in 2013.
"Addison Lee have made so much money, they're actually giving it away in large quantities to the Conservative Party."
"Are we really supposed to believe that Addison Lee has had no influence on the move to push amendments through before the publication of the Law Commission's in depth review?"
Mr Griffin, she claimed, was "clearly a man with a potential political agenda".
"I think we cannot help but ask ourselves what might he want back in return for his large donation."
'Long overdue'
Mr Griffin donated £500,000 to the Conservatives in July 2013 while Addison Lee donated £254,045 to the party between December 2008 and September 2011.
Addison Lee said Mr Griffin had made his donations to the Conservatives "in a personal capacity".
"Whilst Addison Lee believes a review of the current UK taxi and private hire laws is long overdue, we can categorically confirm that none of our staff or directors has attempted to influence any early amendments to this legislation," a spokesman for the firm said.
"We welcome the chance to have our say when the Law Commission publishes its review."
Changes proposed in the Deregulation Bill include a ban on ordinary licence holders driving a private hire vehicle when it is off-duty, while firms will be able to subcontract work in future.
The Law Commission is taking submissions on changes to the regulation of the industry, which were intended to be brought to Parliament in a separate bill.
Transport Minister Stephen Hammond told MPs the decision to include new laws in the Deregulation Bill was "pragmatic" and would allow "immediate progress" to be made.
Source: BBC News.

With thanks to Acnedriver.
Posted by Editorial at 10:03 AM 3 comments: