Pedestrianise Oxford Street : Yes, but not at street level?

Pedestrianising Oxford Street at street level is not a solution. It just moves the problem to surrounding streets 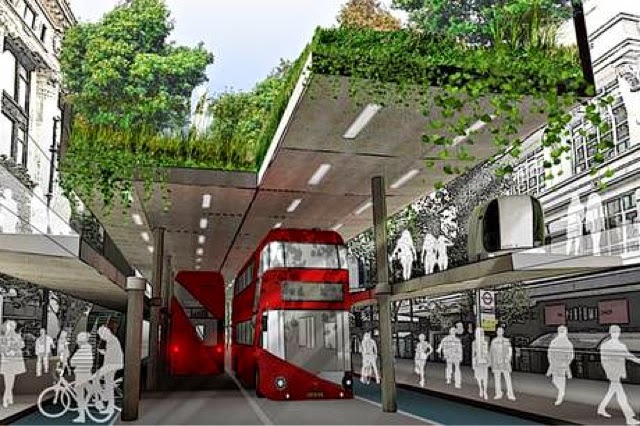 > Time for a walk down the high street <

The recent  testing carried out by the Environmental Research Group at Kings College London showed that Oxford Street is one of the most polluted roads in the world. The reason for this is undoubtedly diesel pollution.

> Londonair.org.uk/London Oxford Street <
More recent testing carried out by Ricardo and Brighton and Hove Council has clearly shown how most of the diesel pollution from buses is caused when they are stop /starting in traffic.

> Research shows that smoothing traffic flow could significantly reduce bus emissions <
The conclusion is that urgent action needs to be taken to improve traffic flow and to separate pedestrians from the toxic pollution.
Suggestions have been made that Oxford Street should be pedestrianised, which is a great idea. However this does not acknowledge that the buses and taxis are a critical part of the Public Transport infrastructure and if they prohibited from using Oxford Street they will just cause more congestion elsewhere which in turn will further increase pollution.
One very old idea that has been suggested many times and ignored should be now given proper consideration; elevated pedestrian walkways and areas.
This is a simple solution which can be easily achieved. It will improve the traffic flow because there would be no need for traffic to stop for pedestrians crossing the road and therefore significantly reduce pollution. It would free up space at street level for dedicated cycle lanes. It would remove the majority of pedestrians from close proximity to the pollution and also from the physical danger of crossing busy roads.
Vertical self powered ventilation shafts could be installed to disperse pollution above high rise buildings, overcoming the problem of ‘urban canyons’ which means that pollution can accumulate to dangerous levels.
Shopkeepers could benefit from such a scheme because there will be an increase in shop front area with the additional upper pedestrian level, creating a similar situation to that of a shopping mall and there will be an increase in footfall because the shopping area will become a cleaner and safer environment.
The cost of a scheme could be funded by retailers who will see increased revenues and by corporate sponsors who would have an excellent advertising opportunity.
The current situation of toxic pollution requires urgent action; this may be a solution which can be achieved in a relatively short space of time. 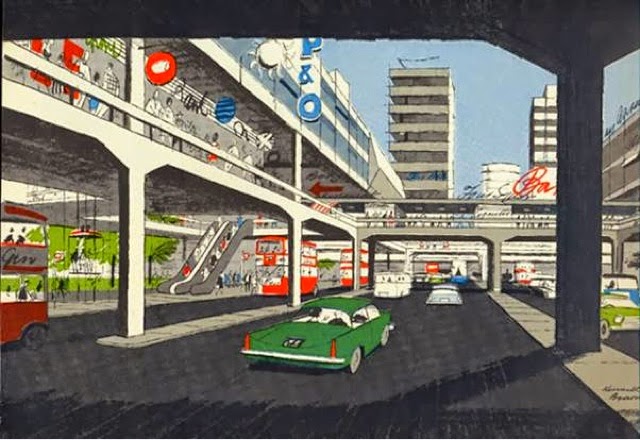 Plans for Oxford Street, London, in the 1963 Colin Buchanan report "Traffic in Towns".
Taking pedestrians out of the equation with elevator crossings in Las Vegas. Source : Campaign for air-pollution public enquiry
With thanks to Dave Davies.

About the best idea I've ever seen on this site

And that's a compliment, honest

Yes, wonderful, but hideously expensive and actually makes life worse for the pedestrians - a.k.a. shoppers - which are the raison d'etre for Oxford Street.

Move the buses somewhere else, and introduce electric buses. With overhead wires, or with batteries. Or even hybrids.

But no, let's not do that. Let's stick to coming up with some completely unworkable plan instead of simply addressing the pollution problem at source.

Didn't work in the 60s, wont work now. How much do you imagine it would cost to relocate all the shops to first floor level?

The comment 'move buses somewhere else' is an idiotic statement there is no where else to move them .

Id traffic flow is improved there would be a massive reduction in pollution.
The pie in the sky idea of an Ultra Low Emission Zone has been proposed by the clown Mayor and supported by people like Murad Quershi who has about as much sense as the Mayor.
The technology of electric vehicles for commercial use has yet to be achieved.
Trying to explain technical issues to people who have zero technical understanding is pointless

Westminster City Council also conducted a feasibility study regarding Oxford Street about 23 years ago which came to nothing.