Two more items of new today for the trade to worry about.
This afternoon SuperCabby broke the news that TfL and the Mayor are allegedly about to announce the introduction of a 10 years age limit. This is a move that could actually back fire on the mayor as the standing 15 year age limit is unlawful and not evidence based.

Spot the working Taxi Driver
The reason why it couldn't be challenged in court is the fact that the United Trade group plus other financially interested parties, without consultation with their respective membership, offered the measure to the mayor stating that they were worried he may have introduced a 12 year limit.
The Mayors call for the limit was not evidence based and no scientific research or report was produced to back up the Mayors claims about the level of pollution from older vehicles.
Now, even in the face of 2 major, evidence based reports that show newer vehicles produce more dangerous NO2 and NOX than older vehicles, Boris and TfL are allegedly going to reduce the life so an of working Taxis.
If this is imposed, then it will be challengeable this time. Case law exists where a council has been taken to the high court by a local Taxi association. The council lost the case and the ruling stated any vehicle presented, regardless of age, if it passes all conditions of fitness must be given a vehicle licence.
Secret Demo?
In a shroud of secrecy, the LTDA and Unite, along with the International Transport Workers Federation, held a protest this morning outside City Hall. The protest was about unregulated competition in London and to highlight the Mayor’s lack of enforcement of existing taxi and private hire regulations, including allowing the Uber app, which undermines existing regulations, to be licensed as a private hire operator.

Many drivers have expressed worries about the poor turn out and the fact that the LCDC were not in attendance. Have the LTDA carried out there threat to go it alone, made on twitter by one of their council of management officers?
Perhaps the next LTDA demo will be held in a phone box.
Sources: SuperCabby.com and CabTrade News blog.

Tonight there is confusion as the LCDC confirm to meeting on Monday, while the LTDA tries to deny any knowledge. 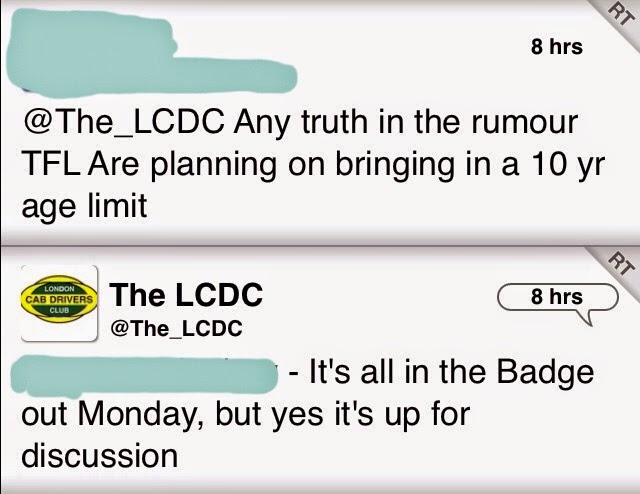 Surely as LTDA have a man on the board of TfL, they would have had knowledge of this new age limit for some time.

Posted by Editorial at 6:38 PM

It was only 3 weeks ago that Steve Mc said live on LBC that the 'Taxi Age Limit is history'
and that Boris had not acted in bad faith. He was wrong on both points.
He obviously knew at that time that the 10 year age limit was being proposed and he has sat back and done nothing.
When will LTDA members wake up a realize that they are being screwed by the people they are paying each month?

So an on foot protest, from the last to do anything.
How many years did they ridicule the RMTs pickets at Windsor house. Hypocrites every one of them .

Age Limit.
Once the trade conceded (without a protest) an age limit rather than a condition based system, the only way was down. This blog have informed you of al this over and over.

Protest.
Organised on the QT to prevent other sharing the limelight, it seems from the photo that only those who do not drive cabs were invited, maybe that why it was not a drive in?
As ever TaxiLeaks front and centre with the breaking news, well done editor.

Troops, looks like the split you predicted in the UTG is going to happen if not already.
The club must be gutted they've been used and didn't see it coming.
Expect phone calls to arrange rearguard action.

Yes, it's a disgrace, but I still think that it's all part of the bigger picture to finish the yellow badge and make the suburbs strictly PH.

I know it's a move that will squeeze Green badge drivers, but it's gonna crucify the suburban guys who can only just scratch a profit in a rented rust bucket, and that cannot support a family!!
For years now the yellow badge has only been any good for part timers, and now they're putting the kybosh on that!!
......As a wise man recently said to me
"Show me a Yellow Badge in a new cab; and I'll show you a driver who'se going over the side!!"

This isn't about Squeezing the Green Badge trade. As far as the Mayor and Tfl are concerned that is just an amusing side effect that has caused some unexpected delight amongst them,

It's actually about moving forward the one tier system by irradiating the nuisance of part timers and retirees clogging up their system, and increasing space to fit more PH drivers in to further undermine the relevance and visible presence of licenced taxis in the hearts and minds of the travelling public.

Those the new transparency requirement HMRC doesn't get, the constant constrictions will.

In a nutshell we're all Dead Men Walking

Shortly no doubt TfL will (either directly or via their stooges in the trade) announce 'further measures to improve the lives of Londoners' AKA rumping the cab trade!

It's then we will need to enter into measures to if not eliminate but reduce the damage, we then have to think about who we are going to have represent us in these matters.

We have two choices on representation on this matter that could finish us:

Option A.
Appoint collection of cab drivers with no real track record of success (cancelling the odd parking ticket or paying for a brief is NOT the same) many of other well meaning but up against TfL, Hendy's spin machine and the Mayor with his friends at the Evening Standard and the media?

Option B
Access a skilled negotiation team with intimate knowledge of dealing with TfL and it's subsidiaries, that probably means either the LU team at RMT or the bus team at UNITE, maybe a comparison of wages for bus as against tube staff may inform your deliberations.

I like you am a cab driver and guess what I know my limitations and therefore my ego is kept in check!

Others in the trade more confident yet the hundreds of satellite offices and the loss of rank spaces clearly indicate that they can't deliver, not for want of trying in many cases, but as I said again up against the big battalions TfL?

Its not the situation or choices we want or deserve, but it's there, we have to as I said think carefully!

McNamara's worst nightmare has become a reality. Like it or not, he will now have to deal with the Taxi Age Limit or face losing members,lots of members. McNamara was the major protagonist and organiser of the now infamous picture shoot featuring a conglomerate of people who took it upon themselves to sign a document on behalf of the trade accepting the need for a taxi age limit.

You calling the Rat Pack a bunch of morons fella? Well are yeah?