Ive been saying for some time that there will be a study which shows that taxi drivers are exposed to the highest levels of pollution in Central London.

Well here it is!

The results
If asked to think about the problem of air pollution in cities, you might picture pedestrians and cyclists wearing masks to protect themselves from breathing in harmful fumes.
So you might be surprised that in our experiment the highest levels of air pollution were recorded by the person in the car, followed by the person travelling by bus.
In fact, the car driver was exposed to more than twice the amount of air pollution as the person walking the same busy route, and almost eight times more pollution than the cyclist. 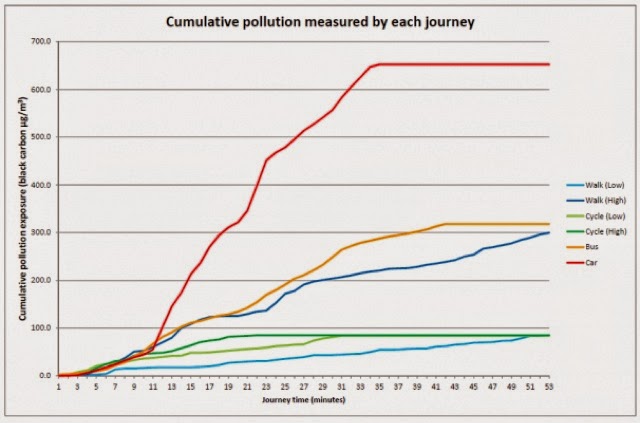 The reason for this is that the vehicles were travelling in a queue of traffic that produced a stream of air pollution from the vehicles directly in front.
This air pollution was brought in through the ventilation systems and trapped within the vehicles, resulting in higher concentration levels.
Meanwhile, the pedestrian was walking to the side of the sources of air pollution and so was exposed to much lower concentration levels and, although taking longer, half the amount of air pollution as the person in the car.
The cyclist sharing the same road as the car was most likely able to avoid the higher concentration levels of pollution by not always being directly behind the vehicle in front and because the air was able to circulate freely around them.
The cyclist was 13 minutes quicker than the car, and was exposed to an eighth of the pollution.
The lowest pollution levels were experienced by the volunteers on the alternative quiet routes, away from busy road traffic. In particular, the person walking the quiet route was exposed to a third of the pollution as the person walking the busier route.
For the cyclists, the difference was most noticeable in the average levels of pollution that were 30% lower for the quieter route.
Editorial Comment...by Peter Conneely.
We need No Emissions Taxis, Buses and goods vehicles in next 10 years to be mandatory. London's buses currently recieve £150m a year. This type of investment from TfL would give each Taxi a £6,000 zero emission LPG engine conversion and would be a one off payment, unlike buses who get this money annually.
"Zero Emission" taxi engines already exist and should be subsidised, the same way buses recieve a subsidy.
LPG engines are currently working in 2 models of LTC Taxis, TX1 and TX2, plus I believe there was also a MetroCab running around on LPG. These are custom built engines which have all been tested and passed by the PCO.
Conversions could also be financed partially by LPG company, with Ads on cabs. Perhaps there could be a new partnership - Boris Cabs- you never know!!!
Source: HealthyAir.com: with thanks to Dave Davies.

Posted by Editorial at 5:51 AM

This is an area that I have studied very well, taxis need dynamic activated charcoal cloth air filters as well as other stuff

Buses are subsidised with £150m a year.
Taxis get nothing.

TfL should have helped financed a cleaner engine

Boris has not cleaned up London air as he promised with Taxi Age Limit. Older taxis taken off the road and scrapped were cleaner than new ones his mate Tim sold to the trade.

Boris must go, he has failed miserably.

I drove an LPG cab back in the late 70's, was a fantastic vehicle.
Mate of mine had his fairway converted to petrol Gas but had nothing but problems, so it has to be a reliable convert..

I also remember they used to give a reduced rate at the airport for LPG cabs as an incentive. Perhaps this is another avenue that could be explored if a subsidy was out if the question.

There are lots of reasonable and rational solutions including LPG or a Euro 6 petrol engine conversion but the Mayor and TFL have deliberately ignored all of them.

Cabbies Against Boris will be issuing a Press Release to confirm protest action ahead of the Inquiry next week; this is the one opportunity to expose Boris Johnson for what he is

I wonder what the statistics are for drivers suffering from heart disease and chest problems through Taxi driving in London? It's a fact that people die or become ill with these conditions after long term breathing in of vehicle emmissions.

I had to retire from cab driving due to the above illnesses, i belived no warnings or guidelines on health were ever issued by the PCO or TFL as far as i can tell.

The authorities have known for years how deadly london pollution is, but only started acting when the E.U demanded a reduction and government faced huge fines.

How many drivers have died due to pullution i wonder?.