YESTERDAYS DEMO
Richard Masset puts the Taxi trades case across well.
Andrew Boff asks why the Taxi trade hasn't gone to the London Assemble with their grievances.
Richard should have answered "We have, many times, ask Caroline Pigeon, ask Jenny Jones, ask Darren Johnson.
It just goes to show how much the GLA listen to our problems, when the London Assembly Member sent to be interviewed over the Demo, has no idea what's been said and to who.
Do GLA members not have research staff?
Andrew, you didn't do your homework
Nice to see Mr Boff just managed to stop himself in mid sentence, while talking about the drivers on the demo.
"We're going to see that reputation damaged by the actions of a few Nut...." Shame you never finished that sentence Andrew.

YouTube Video from David R shows the demo having the desired effect.

Dave Davies from Cabbies Against Boris (C.A.B.), put our case smoothly and professionally.
Unfortunately we don't have the whole of this interview, but Dave managed to give clear direction as to why we were

Another complete waste of time.
Thousands of drivers answered the call, but unfortunately the organisers failed again to get the message out before and after the event.

Nothing learned from previous demos.

This morning, the drivers efforts are forgotten, it might just as well not happened.

Even Palestinians carrying black flags banned by the government were allowed to protest along Whitehall and yet, TfL put an army of compliance officers on the street, taking the numbers of drivers displaying stickers in their windows advertising the demo.The usual bullying and intimidation tactics we've seen on previous demos repeated and expanded. 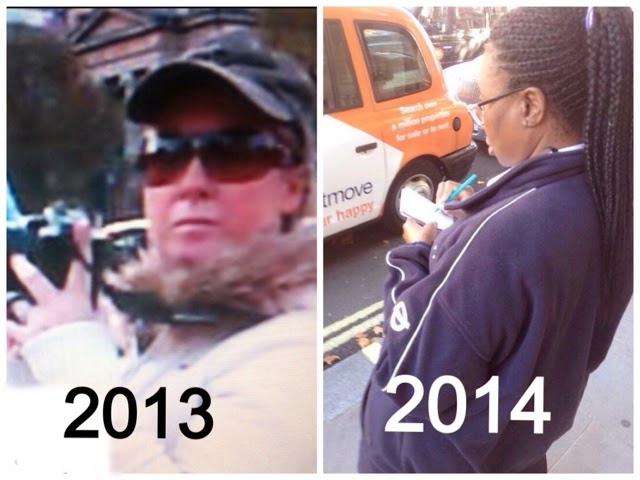 Compliance doing spot checks on drivers nor working are unlawful. Marshals from organisers should have put a stop to this, or at least advised drivers of their rights not to comply, but didn't.

Afterwards the media were confused. The fact that there was no clear message left them free to use their imagination which they did to out detriment.

Even drivers who were interviewed by journalists from the worlds media were unsure why they were there giving a multitude of differing reasons which again led to confusion and the wrong messages getting out.

When will the LTDA realise that they can't do this alone, they just don't have the skill. After 45 years of inaction and collaboration they still can't put a simple demo with a clear agenda across.
We've had 3 demos on Whitehall in the last year which have proved to be 3 waisted opportunities. 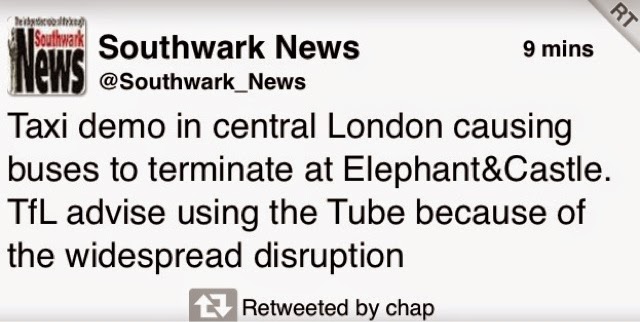 The fact that the demo was again sited on Whithall gave TfL the opportunity to organise arrangements which took buses out of the traffic and minimised disruption. People who had paid once on the bus, were then asked to pay again to complete their journey on the tube. A win win situation for TfL.

The LTDA played into the hands of TFL by not uniting and utilising the whole trade to employing the best PR tactics.

Posted by Editorial at 3:07 AM

Andrew Boff is a clown!

Nothing more than a party hack at the bottom of a greasy pole, pay him no mind.

What all this proves is that the well held middle class politicos at the GLA, TfL senior management and the mayor and his staff have NO IDEA what challenges we and working people face just like the mob at the gasworks.

We need to have a charter of a few clear objectives, agreed by all.

We cannot win anything the way we are currently divided.

So trade leaders , plenty of you talk big, now act big and sit down together.

Andrew Boff, your reputation has been severely damaged by calling the Taxi Drivers "a few nutters"

Editor, if possible can you post Andrew Boff's contact details so the few can complain to him directly.

And well done Dave Davis,TfL is

The UTG are doing quite well and don't need other trade orgs. You only have to look at the recent activity regarding the rickshaw issue to realise we are getting it right!

The Feds tried to arrest Al Capone for murder, extortion etc and failed so they jailed him for tax evasion because it was the one clear thing that they could prove.

The one clear thing that will prove Boris Johnson and TFL have acted improperly and unlawfully is the taxi age limit.
If they are exposed on this one issue then the other issues can be dealt with.
Taxi drivers are subjected to financial hardship by the Taxi Age Limit, but more importantly drivers health is at risk.

The concept of focussing a protest on this issue seems to be lost on taxi drivers and trade orgs. It seems that it is too difficult for them to grasp the idea of a strategy (as in the Feds strategy with Al Capone) and instead prefer the PR shambles they have created.
What exactly was the objective of yesterdays protest?

The Cabbies Against Boris objective is a Public inquiry as it is the only mechanism to hold the Mayor and TFL to account.
Do people seriously think that the Mayor , the GLA or TFL are going to hold themselves to account?

The message never got across because it wasn't meant to... There were plenty of predictions before the demo that this would happen, so it shouldn't be a surprise the message got lost!

Andrew Boff and his GLA are as much use as a chocolate tea pot, as are the LTDA.

All Massett needed to do was throw the DEFRA report at Boff and ask him why the GLA has never challenged Boris Johnson on his corruptly introduced Taxi Age Limit, and the false information he used to introduce it!

Now ask yourself why McNamara has broomed the one issue that can have Boris Johnson bang to rights for improper practice in office and corruption!

WAKE UP GUYS AND SMELL THE COFFEE!!!