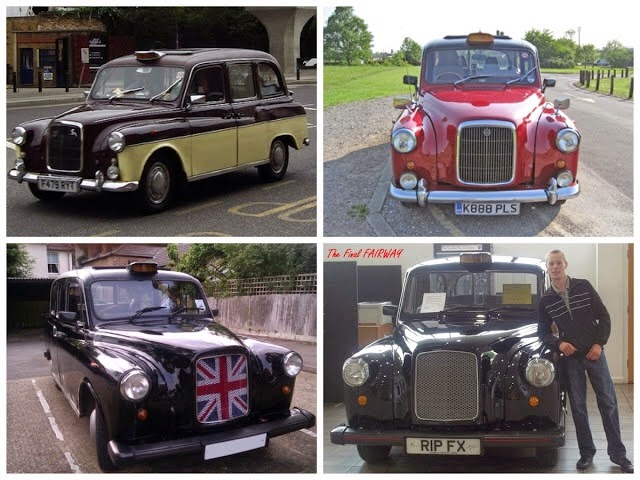 Less NO2 than new Vitos and TX4s

The Mayor of London acknowledged in a written report to the Environmental Audit Committee in 2011 that the new Euro Emissions standards were not delivering reductions in pollution.

He said ‘ A Euro 5 car, for example, emits around five times as much direct NO2 as a fifteen year old car.

He then completely contradicted his own evidence and needlessly scrapped 15 year old taxis.

It is a requirement of Public Law that the Mayor’s decisions are evidence based and for proper purpose.

The London Taxi Age limit is neither:

It is not evidence based as he conducted no testing whatsoever. If he had, it would have shown that the new taxis (TX4s and Vitos) create MORE pollution.

It is therefore not for proper purpose:
The Taxi Age Limit was supposed to reduce pollution and the Mayors policy has actually INCREASED pollution.

Boris Johnson was asked on many occasions by London Assembly Members to at least conduct basic testing to prove that scrapping taxis would reduce emissions.

He point blank refused to conduct any testing whatsoever..

In May 2013 Defra released a report after the Environmental Research Group tested 10,000 taxis which confirmed that the new taxis were creating more pollution than those that had been scrapped. 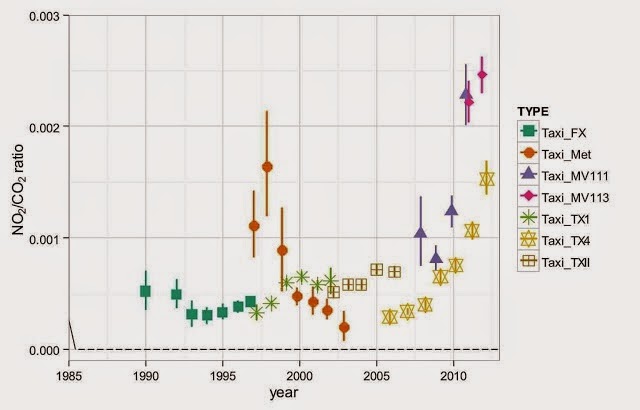 The Mayor has continued to ignore this further conclusive evidence and continues to force taxis off the road on a daily basis, creating financial hardship for many drivers and doing nothing to reduce pollution

Emissions reduction of Particle Matter, could have been achieved by retrofitting Diesel Particulate Filters.

The Mayor has written to the Environmental Audit Committee boasting that he has reduced pollution in London by scrapping 3000 of the most polluting taxis, even though technical and scientific evidence proves that he has not reduced pollution at all and in fact the new Euro 5 taxis create MORE harmful NO2 than the 15 year old taxis.

Ref to Mayors statement in 2011

11. NO2 levels have not fallen in recent years as modelling had predicted. This is a problem across major cities in the UK and across the EU.

Emerging evidence, including a report by King’s College London, suggests that this may be due to the failure of recent Euro standards to deliver expected reductions of NO2 [1] .

A Euro 5 car, for example, emits around five times as much direct NO2 as a fifteen year old car. 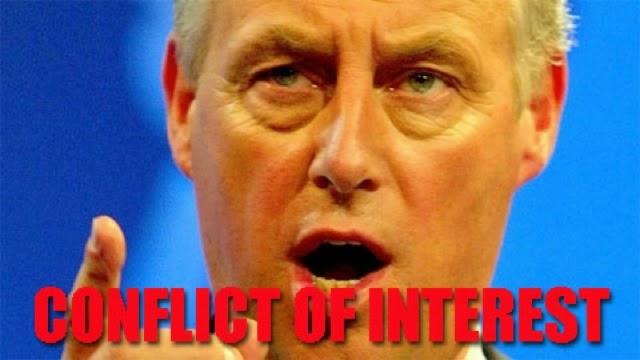 At the same time Tim Yeo was chairman of Eco City Vehicles, selling the Mercedes Vito, one of only two Taxi models, drivers were forced to buy as a direct result of the Mayors policy. A clear breach of Parliamentary Rules, yet the Standards Commissioner ignored all complaints and exonerated Yeo of any wrongdoing.

The Mayor of London has ignored all suggestions of valid emissions reduction ideas including:

• a ban on peak time deliveries,

• a project to convert taxi to petrol engines,

• and a diesel engine cleanup programme.

As a result of his failed strategies to reduce pollution the Mayor is now proposing further ridiculous ideas like an Ultra Low Emissions Zone in 2020 which could see ALL current taxis taken off the road.

Allegedly, there are 4267 people a year dying in London from Air Pollution (the Mayors own statistic) which includes heart and lung disease and cancer.

Taxi Drivers are probably the group of workers most affected by air pollution in London ; (how many drivers do you know with one of the above diseases?) and yet the Mayor sees fit to implement improper policies which will not reduce pollution but which deliberately cause financial loss to taxi drivers.

It seems like it is part of his master plan to destroy the London Taxi Trade.

The Cross Party Environmental Audit Committee are currently conducting an Inquiry as to why there has been no improvement in air quality.

They have summonsed the Mayor of London to appear before the committee and he has reluctantly agreed to appear on Wednesday September 10th at 2 pm.

THIS INFORMATION HAS PREVIOUSLY BEEN SENT TO ALL LONDON TAXI TRADE ORGANISATIONS.

THEY HAVE ALL CHOSEN TO IGNORE IT.

THE IMPROPER TAXI AGE LIMIT, IS THE ONE POLICY THAT CAN PROVE THE CONDUCT OF THE MAYOR AND TFL IS IMPROPER, ON MANY ISSUES AFFECTING THE LONDON TAXI TRADE.

IF THERE WAS EVER A TIME TO LET THE MAYOR AND THE POLITICIANS KNOW THAT THIS TREATMENT OF LONDON TAXI DRIVERS IS IMPROPER, IT IS ON THAT DAY.

THERE IS NO BETTER TIME TO PROTEST AGAINST ALL THE ISSUES AND THE CONTINUED PERSECUTION OF THE TAXI TRADE BY BORIS JOHNSON AND TFL.

ITS NOW OR NEVER!

Zero emmision taxi engines should be made
available to cab drivers via a subsidy similar to
Ones which the buses benefit from - TFL buses receive 7,5p per journey subsidy 6.5 million times a day -
Nearly .5 M £ every Day!!!
London cabs receive nothing !
I inspected an LPG converted taxi Engine last
Week - Zero Emissions! Runs entirely on LPG
and was a TX1 - diesel Paticulants cause cancer
Fact - cabbies wake up - TFL policy is slowly
Killing us !!!

The LTDA, LCDC and UNITE OFFERED the age limit up to TfL., making any legal challenge impossible.

Of course the minutes of this very important meeting are not available.

They agreed to this age limit and got NOTHING in return, they don't drive cabs so they don't suffer.

Well done for exposing this duplicity.

This is the "BIG ISSUE" the UTG wont go anywhere near. The UTG, LTDA, LCDC and Unite were conned into signing The Taxi Age Limit. They collectively agree TfL are not fit for purpose. Having a demo while Boris Johnson is being grilled and held accountable is a 100% must.
This is what every trade org SHOULD be doing; if they fail to do so it makes them as UNFIT for purpose as LTPH and TfL!

Of course you won't read anything about this in taxi or the badge. Neither the LCDC or LTDA want to upset their advertisers LTC and KPM.

Don't hold your breath waiting for the announcement of This demo, it won't happen. Oddy won't let it happen incase it rocks his well paid boat

Don't forget! Bob doesn't just get paid for his seat on the board, he's on committees as well.

He only has TfLs interest at heart not the taxi trade.

Bring the clean Swedish diesel to London Now...
Brand it as London city Diesel.
The Mayor can compel every fuel Station to stock this fuel within a month or be closed down.Clean air for everyone.
Tony Casey

The only way a demo will happen is if a protest group is set up of if the RMT takes action.
The LTDA/LCDDC will do nothing.
Maybe they are embarrassed that they signed up for the taxi age limit or maybe they just want to keep their well paid jobs as taxi trade representatives.
Whatever the case they will not protest about the one issue which can prove the Mayor has acted improperly
It a protest is organised and a proper Press Conference is set up BEFORE the protest then the media and politicians will get the message that Boris Johnson has acted improperly on the taxi age limit.
It will force the Inquiry to ask Boris Johnson why he has needlessly scrapped 3000 taxis

If this is proven then it is likely he could be forced to resign as Mayor.
A new Mayor might have a reasonable attitude to the taxi trade and take proper action on all issues.
SACK BORIS

The LTDA, LCDC etc agreed to the taxi age limit based on TFL information that it would reduce pollution.
That information has since been proven to be false .
The idea that the Taxi Age Limit could not be legally challenged is wrong.
It can be challenged because it was implemented based on false information