Yes the famous last words of Admiral Horatio Nelson as he lay dying onboard HMS Victory at the battle of Trafalgar in October 1805.
Fast forward to our very own 2014 'Battle of Trafalgar' and it's aftermath. 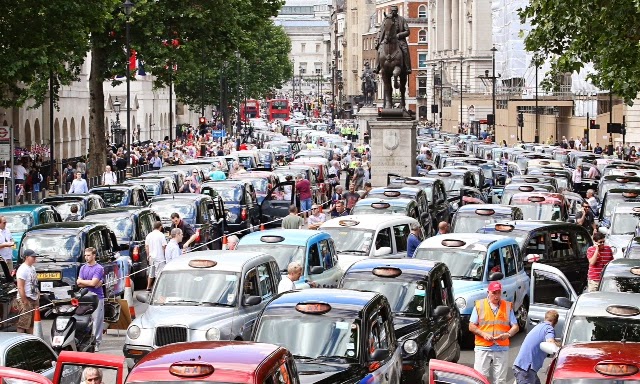 Originally marketed as a demo against TfL it's continued failings including the recent debacle over Über but not just Über.
Those who turned out, members from every trade org or not members thought this was the start of a series of high profile events from a united trade to bring real pressure on the Mayor and politicians to ring the changes at TfL.
Now we find out a 'deal' has been done without seemingly any member consultation to suspend demos until the result of the Über meter matter has been decided in the courts, the very matter that can't be decided as the LTDA has summonsed some Über drivers, somehow turning action into inaction.
As someone once said "you could not make this up!".
Quite why UNITE, LTDA and LCDC decided not to continue to press TFL on the many, many other matters that concern the trade, is a complete mystery and requires some explanation.
Many of these issues have nothing to do with Über at all.
Now we find that the LCDC has met with Private Hire yet cannot seem to be able to meet with fellow cab drivers, again another explanation is needed, they would have screamed blue murder if anyone else met with PH!
Returning to matters nautical and historical, where's the link?
Well it seems just like poor old Horatio, just when victory was near someone climbed the rigging and fired a lethal shot, who and why another mystery?
All I can say is 'Kiss me ......'
Rear Admiral Spartacus
Posted by Editorial at 3:30 AM

I gave a up a days work to go along to this demo and stand shoulder to shoulder with my green badge brothers and sisters and i was made most welcome as a yellow badge.I thought that this was going to be an ongoing event until tfl sat down round a table with all trades to sort out all the problems !!! but again just like when we had our meetings at palestra along came peter rose Steve mac and grant Davies and put the boot into us. AND guys they just done the same to you its all about there EGO's tey dont give a toss about you although they take your money its about what's in it for them and until there replaced this trade will just wither and die .

Good stuff, let's have these explanations.

Captain McNamara and the cabin boys of UNITE and the LTDA ahoy there!

Well said jim.after the success of the demo we had TFL on the backfoot and we should have been having a demo a week until something gave.the media were really interested for once and we should have taken advantage of that.after 36 years in the saddle I have never felt so low every time I drive into London .the first thing that greets me are the yellow badges driving up putney high street with their light on sticking two fingers up to me and all the other green badges that did the green badge..then the never ending touting that is completely ignored.then the lack of etiquette from the so called new drivers.no this is not the job that I began in and loved.

Another stunning article by Jim and the team first class job boys.

Now for the treacherous 2 faced gutless bottle jobs and epically the VICHY DC.........

The white feathers are in the post....enjoy!!!

You should all think of the bigger problem.20mph bicycles lanes Camden council tottenham court road if you don't put a stop to this now we will have no roads left to operate. You need the biggest demo this country ever seen from all motorists bring it on.