Putney Bridge a To Close For 3 Months. £1.5million project to start on Monday 14th July .

Repairs to Putney Bridge mean it will close to all vehicle traffic on Monday, July 14. 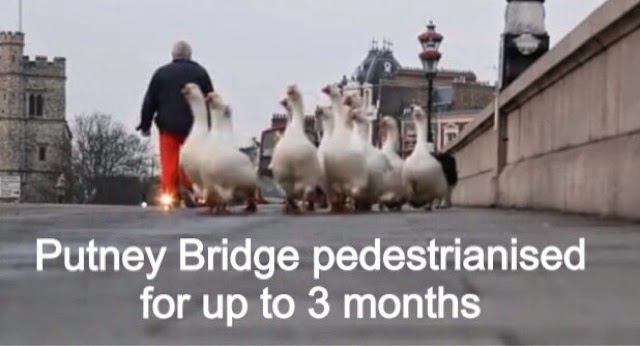 However, the predicted six month closure timetable has been reduced. Now, engineers are saying the works could be completed in around half that time.
Most of the £1.5m repair programme will be carried out during the school summer holidays. This timetable should also ensure that the bridge will reopen in time for Christmas.
While the works are ongoing pedestrians will still be able to cross the bridge, as will cyclists, although they will need to dismount.
Buses will operate a shuttle service from both ends of the bridge. This means that passengers will need to cross it on foot to carry on their journeys.
Motorists will still be able to use other river crossings, while others are expected to switch to public transport. People who make only short journeys north and south of the river may take advantage of the Barclays Cycle Hire Scheme which was extended to Putney and other northern parts of the borough in December 2013.
The timing of the repairs has been drawn up in close consultation with Transport for London, neighbouring highway authorities, local amenity groups, business representatives and other partners to ensure a high level of co-ordination with other major roadworks in south and west London.
The programme has also been drawn up to avoid impacting on the Wimbledon tennis championships, while the works have been scheduled so that August’s Ride London cycle event, which attracts thousands of professional and amateur bike riders, can still be accommodated.
Council leader Ravi Govindia said: “These works are absolutely vital to protect the internal fabric of the bridge and ensure it lasts another 100 years.
“Our primary concern is to get this important job done efficiently and quickly so that there is the least amount of disruption to residents, businesses and the wider travelling public.”
The decision to fully close the bridge to all traffic – rather than have a partial closure – was backed by a clear majority of both residents and businesses during the public consultation late last year. The public’s preferred option was getting the job done in the shortest possible time and at the lowest cost to taxpayers.
Cllr Govindia added: “I am pleased that we have dramatically shortened the closure period and ensured that not only will the works be carried out when traffic levels are at their lowest, but that these vital repairs should be completed well before the busy Christmas rush, which is good news for local traders. Unfortunately a repair job on this scale to an important river crossing means that some degree of disruption is unavoidable, and we are of course very sorry for the inconvenience it will cause, but we have worked very hard to keep this to the absolute minimum. And we are giving people as much advance warning as we can so that they have plenty of time to plan alternative routes or look at using other forms of transport to get across the river.”
Public meetings and drop-in sessions are also being arranged so that people can find out more about the project and posters will also be placed on bus stops across Putney to inform passengers about the changes.
June 2, 2014
Posted by Editorial at 2:05 AM

This is an outrageous and shameless slur on the good name of the drivers who work the island rank at Putney Station....Putney Hill, Putney High Street, Putney Bridge Road, Upper and Lower Richmond Roads......

Hi! I could have sworn I've been to this site before
but after browsing through some of the post I realized it's new to me.
Nonetheless, I'm definitely happy I found it and I'll be book-marking and checking back frequently!