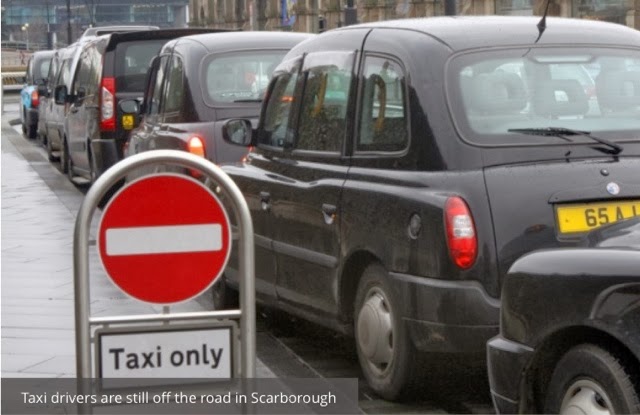 Taxi drivers have been forced off the road in Scarborough, waiting for CRB checks: Why the sudden delays?
Delays in processing background checks on Scarborough taxi drivers means a handful of them are still unable to get behind the wheel of their cab, months after they were submitted.
In total, eight drivers are still unable to take their taxis out as they await the results of compulsory criminal record checks as part of their applications.
Unlike London, where Commissioner Peter a Hendy has personally refused and given the best taci service in the world, a vote of no confidence.
In Scarborough though,temporary  licences have already been granted to many drivers, but the problem in has been caused by lateness of some applications, forcing a few drivers to put the brakes on their careers.
In a report that went before full council on Monday, Cllr Bill Chatt said: “I mentioned certain issues around the current round of Taxi and Private Hire driver licensing.
“As public safety is paramount each application is subject to a criminal records check; the delay in these being processed by other agencies had led to some drivers  not receiving their licence before the existing one  expired. I would like to update members that good progress has been made in licensing drivers, however there are still a handful still outstanding.”
Scarborough Council says that all eight were latecomers and as a result didn’t qualify for the self-declaration option.
As a result, all of them haven’t been permitted to drive and won’t be able to do so until their checks come back clear and the licences are issued.
The backlog has been caused due to changes in the Protection of Freedom Act earlier in the year, which has caused a national pile-up in the police processing what used to be known as CRB checks.
Drivers have received the courtesy of temporary licences, despite a possible criminal history that would ultimately take them off the road.
Innocent until proven guilty....in the tradition of British law.
Posted by Editorial at 12:59 PM

READ, NOTE AND DOUBTLESS IGNORE THE SELF DECLARATION OPTION?

UNITED TRADE GROUP do the same and defend your members!

You have seen that a self declaration can work so show some humanity and issue those temporary licences.