Wonder If The Mayor And TfL Will Subsidise This Folly, Like The Buses?...Is Boris Off His Trolly? 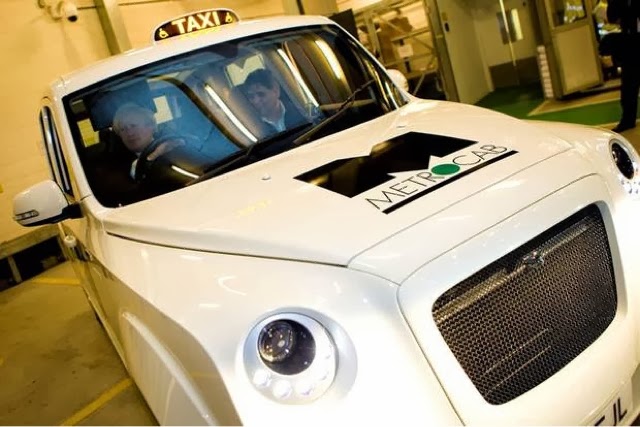 Boris Johnson has been given an exclusive preview - and impromptu ‘roadtest’ - of a ‘clean’ new electric-powered black cab planned to revolutionise travel in the capital next year.
Designed and built in Britain, the all-new zero-emission Range-Extended Electric Metrocab (REE) runs on a powerful, near-silent electric motor.
Drivers will be able to slash their running costs by charging the taxi’s lithium-ion polymer batteries at home on a standard three-pin plug, or by topping up at designated charging posts around London.
Even on long runs the new-generation Metrocab will never run out of electricity: its bank of batteries will also be re-charged by a small ‘range-extender’ petrol engine shoehorned under the bonnet. The engine kicks in to generate fresh electricity when the batteries become depleted.
The Metrocab’s makers - Ecotive, and Frazer-Nash Research based at Mytchett, in Surrey - claim their new taxi will drive down costs for drivers while delivering enhanced comfort and performance.
They say it is ‘street ready’ and that it will undergo trials in London early next year. If it proves successful it will go on sale in 2014 for the same price as the rival diesel-powered TX-4 cab that is produced in Coventry, with parts from China, by the Geely Group. The Metrocab would become the first electric cab on sale in London.
It was unveiled to Mr Johnson at a car park near City Hall last night.
Apparently, Boris couldn’t resist jumping in and driving it around the carpark to see what it was like. He was accompanied in the cab by Frazer-Nash chairman Kamal Siddiqi.
Metrocab chairman, Sir Charles Masefield: “ The Metrocab is designed as the next-generation taxi and represents a revolution in the market as the first electric-powered cab to meet the duty cycle of a London taxi, where cabbies typically drive many miles outside the city, making pure electric cars impractical with current technology and infrastructure.
“Ready now, our ... technology offers the solution London and other world-class cities are looking for.”
Power will be delivered to the vehicle’s rear wheels from two electric motors. Its makers claim that the passenger compartment, with seating for six, has generous ‘panoramic’ glazing for good views out. They says it has increased luggage space compared with the previous, discontinued Metrocab, and full disabled access. Metrocab will reveal further details next year when London trials begin, but say the vehicle fully complies with Public Carriage Office rules, including the tight turning circle required for the capital.
Frazer-Nash has developed electric and hybrid-electric drivetrains for quarter of a century. It was an Official Vehicle Partner with its fleets of electric vehicles to the Olympic Games in Sydney and the Commonwealth Games.
Editorial Comment:
Begs lots of Questions such as:
Just what is the maximum distance this vehicle can achieve?
How will having the heater, windscreen wipers, Radio, phone charger and headlights on together affect the vehicles overall radius?
What if you live in a tower block in Stepney, how do you charge it overnight?
How often during a shift will you have to stop to top up batteries?
How long does the battery lack last?
How much are the battles packs to replace?
Will we have to lease/rent battery packs?
How fast do the batteries degrade with frequent charging?
Will TfL subsidise the cost of the vehicle, as they do with bus companies?
Is this just another foolish folly, in the same vein as Boris bikes and Cable cars, that Boris expects us to pick up the tab for?
Source: Standard on line.

Let's hope all these vehicles about to hit the market are up to the task both as a working cab and economically.

Let's also hope it drives up the woeful service given by salesmen where soon as they have sold you a finance package, you are then seen as a nuisance for ever more.

What about a nuclear cab available in two trim levels the plutonium and the uranium! six million miles to the ounce but after 15 years you have to encase it in concrete and dump it down a disused coal mine, that what Alan Fleming had to do with his Metro,

The mayors zero emissions zone coming in 2020
As so far, the mayor hasn't announced any exemption for current taxis, I wonder if drivers purchasing new TX4s realise they ain't going to get 15 years service out of their shiny new taxi.

Cabs bought now, unless provisions are in place will have to come off the road or pay an extremely high dividend to TfL.

What ever way you look at it, our representative orgs have let another one slip under their body.

Still with the apathy we currently see in this trade, we will probably all be working for the Carlisle group in 2020.

Still to early in my opinion to contemplate buying any kind of electric vehicle let alone a daily workhorse. They are all rubbish and it has been proved in the long run due to cost of batteries replacing/leasing, etc the most economical petrol engine vehicle is cheaper and better(although not as green perhaps). I hope it succeeds as any competition to LTI and their sub standard over priced gas guzzlers must be good news.

For those who don't read this blog regularly, Boris is a real character. He is the offspring of Bond villain and a clown. Good for a lough but be afraid of his follies.

New cabs are always a risk.if you buy an early new model you are a guinie pig for the company that makes it!