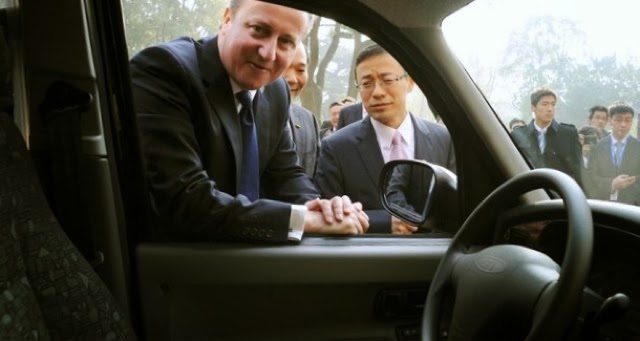 Geely has announced an £80 million investment into research and production of the new hybrid TX5 model, expected to create 500 new jobs at the Coventry plant, quadrupling the workforce.

"Black cabs are synonymous with London. Getting one in Shanghai today highlights how the links between the UK and China can bring rewards for both - Chinese investment helping British businesses to succeed and grow." 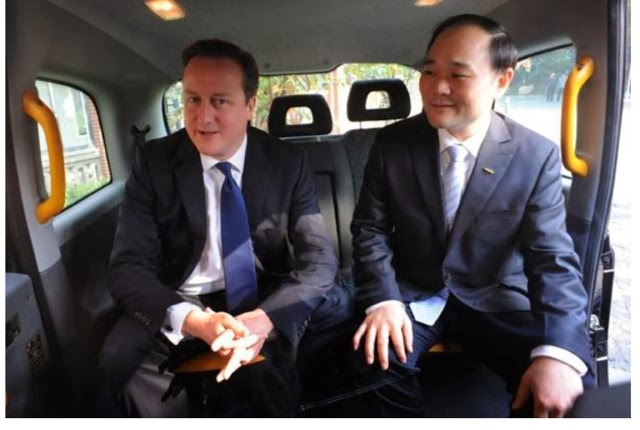 The new Chinese owner of the iconic London taxi brand today announced plans to develop the first-ever electric black cab.But in a sign of the shifting fortunes of Manganese Bronze

Holdings , which was saved from bankruptcy by the Chinese owners of Volvo over the summer , the announcement was made not in London but in Shanghai.

The only London presence was that of David Cameron — posing slightly awkwardly for photos with the chairman of Geely Automotive in the back of a taxi shipped out from the UK. “I wonder if all taxi drivers across the world think and talk like London cabbies,” Mr Cameron pondered.

The purchase of Manganese by Geely is likely to make the London cab a familiar sight not just in the capital but in China as well. The company is about to deliver 100 vehicles to the Chinese city of Shen Zhen in the next two weeks and more orders are expected soon.

Yesterday the company announced the development of the TX5 model which will create 500 new jobs at the company’s Coventry plant, quadrupling the workforce. The TX5 will initially be a hybrid vehicle but the company plans to produce a fully-electric version within five years.

“We believe that electric cabs are ultimately the future for us,” said a company spokesman. “The London cab is iconic around the world and now being a larger group should help us to expand internationally, making it a familiar sight around the world.” Mr Cameron said the Geely partnership symbolised what he was trying to achieve with his trade visit to China.

He added:“Black cabs are synonymous with London. Getting one in Shanghai today highlights how the links between the UK and China can bring rewards for both — Chinese investment helping British businesses to succeed and grow.”

Geely are investing £80 million in their UK operation, and production will be increased to 22,000 vehicles every year.

Dr George Gillespie, chief executive of the MIRA company co-operating with Geely, who joined Mr Cameron on his visit to China, said: “Having delivered phase one of our work with Geely, we are looking forward to the next 18 months of collaboration...we have high hopes for what we can achieve in China in the future.”

Posted by Editorial at 4:33 PM

There is no way on the earth I intend to drive an electric taxi.
Afraid to put the heater/air con on,
side lights instead of head lights
no music
and having to turn away work because the batteries are low and won't be able to reach a charging point.

Petrol or LPG hybrid is the only sensible way to go forward. But Boris is not a sensible man. You only have to look at his projects, they speak for themselves
Boris bikes he said would make a profit
Cable car wouldn't cost the taxi payer a penny
Cycle super highways would make cycling safer

The London Taxi trade is safe in my hands...lol

No way would I drive a cab that has made in China stamped on the bottom, they cannot even make cars for there own domestic market that don't fall apart, UK taxi owners don't want this cab its total rubbish

What about the tx4 that was going to run on water. .. never again would I buy a tx.. what a load of cock and bull