Coming to a rank near you, TfL's new mobile cash cows
Compliance officers are to be issued with new handheld devices.
Handhelds will be capable of scanning barcodes printed on the new licences, which will instantly bring up the licence holder’s details. Handhelds will also allow the printing of notices on the street, enabling the compliance team to spend less time in the office completing paperwork and more time conducting enforcement activities. 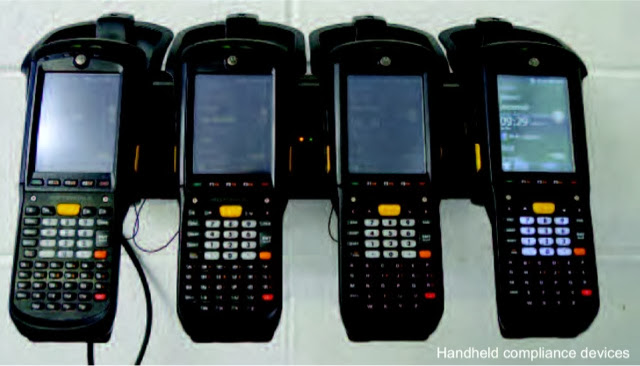 The device looks more like the Brick Mobile phone from the eighties, but could raise millions in fines for TfL.
Cutting edge??
There is no qwerty keypad on the device which has a pad of ABC type buttons, making the entry on details painfully slow.
We watched in disbelief as compliance officers did badge and bill checks, entering data into the devices. The quickest check of the ones we put on the clock was 6.5 minutes.
Interim general manager for LTPH Helen Chapman told one driver, it would be a great idea for checks to be carried out with a passenger on board. She stated customers would be reassured that the Taxi they were in was a genuine Licensed vehicle.
In our opinion, most people already believe the Taxi they are getting into is genuine, sitting through checks such as this will only instil doubt in their minds
Can you imagine the frustration of a passenger who has had to wait in a queue, due to the fact compliance are checking Taxi details, then have to sit there watching the clock tick up while a CO is dithering, entering details with one finger into a hand held device. Yes I can see the passengers really loving this experience.
TfLTPH, New Powers:
A few years back legislation was put in place to enable TfL to issue fixed penalty fines to Taxi drivers for new offences such as failing to wear a badge, not displaying IDs, over ranking or forming unauthorised ranks. Attached to the handheld device is a printer, the sole purpose of which is to issue fixed penalty tickets and stop notes to drivers.
But TfLTPH intend to punished Taxi drivers even further.
We have been informed that if a licensed Taxi driver receives more than two or more of these new fixed penalties within a prescribe three year period, they could be called up for further action to be taken.
Posted by Editorial at 11:52 AM

Anonymous said...
This comment has been removed by a blog administrator.
1:55 PM

Anonymous said...
This comment has been removed by a blog administrator.
2:46 PM

Anonymous said...
This comment has been removed by a blog administrator.
3:22 PM

I cant understand why you have removed these comments . let me see , is it beacuse you know its the truth?

Not having drivers start a war between YB and GB on here...go to the forum.

None of the above comment were about the article posted and one was aa actual personal threat.

If you want to leave threats to LCDC members, then leave them on their blog. Not this one.

The identifier and holographics are very much part of this article - this in itself is a devisive issue. You knew when you posted the article it would cause discord - how pathetic you csn be.

Forget who likes or does not like who and who said what anon.

Let's concentrate on the matter in hand, TfL using us as a cash cow dressed up as public protection. It's called revenue driven enforcement.

They will also divert whatever small resources they deployed against touts and PH to the cash register called the London taxi Trade.

It may have one good effect in that cab drivers are famously apathetic now some one is reliving them on the spot of their hard earned they might realise that all is not well.

Maybe everyone appeals the tickets to clog the system up, they will have to have some kind d of independent adjudicator not appointed by them otherwise we will drag them into court.

Today many 'leaders' in the trade may wonder what they have unleashed by not asking the right questions if they asked anything at all.

if you don't do anything wrong you won't get a penalty will you. the only ones who worry are the ones who have something to be worried about. go to work and abide by the legislation nothing to worry about

I suggest you read the article again, as it appears to have gone over your head

But when your kept back unnecessarily on a rank while drivers in front have their details and cabs checked over, in front of a line of irate passengers who then take it out on you, don't come on here complaining.

6 minutes per cab 10 cabs in front of you, you do the maths!

Perhaps you can walk along the line of pissed off passengers explaining that they should be happily reassured the taxi they will now getting into (eventually) is a proper taxi!

Excuse me sir your back wheels are just over the yellow rank markings, please accept this £60 fixed penalty ticket and have a good day. Now be a good little cabby and carry on working.

Hold up sir, have you seen you rear tyre, although I have no police or mechanical training I will be giving you another £60 fixed penalty ticket on just my observation.

Pay up or be called up to Palestra dear boy.

Why is it taking so long to check a bill??? Surely the whole idea of the barcode was you scan it and up come all the details to tally up with the bill in front of you??? just what are they typing into these things?

the life of brian springs to mind again