Thank you for your letter email dated 15th July 2013 sent to the Ministry of Justice, inwhich you asked the following information.

Can you please confirm the number of times that persons with the charge of "Plying for Hire" have been trial in a London Court.

Can you please break these figures down into a yearly total since the introduction of the offence.

I can confirm that the department holds some of the information that you have asked for, and I am pleased to provide this to you.

By way of background the offence comes under s45 of the Town Police Clauses Act 1847 - Drive a carriage / stand / ply for hire when the carriage was not licensed as a public hackney carriage - outside London.

The modern offence is - Touting for hire by a private hire vehicle.  Contrary to section 167(1) and (5) of the Criminal Justice and Public Order Act 1994.

We are only able to run a report which shows the number of cases there have been within the specific offence codes back to January 2009 (when all courts went over toa new electronic data system). Prior to this date the only method of establishing the number of persons charged with the offences would be to trawl through huge numbers of case files and would incur disproportionate costs.

At present we are only be able to provide data up until March 2013 as this is then in line with published stats.

Please also note that a caveat is placed on this information in that the data is derived from data uploaded onto the electronic system and may possibly be incomplete due to erroneous data which upon case entry was “skipped” and rejected from the database. 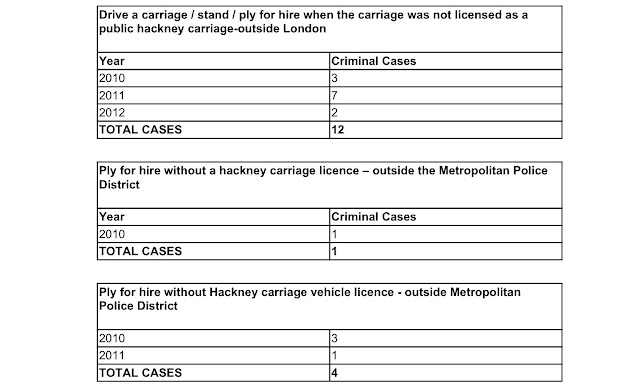 You can also find more information by reading the full text of the Act (available at http://www.legislation.gov.uk/ukpga/2000/36/contents).

You have the right to appeal our decision if you think it is incorrect. Details can be found in the ‘How to Appeal’ section attached at the end of this letter.

You can also view information that the Ministry of Justice has disclosed in response to previous Freedom of Information requests. Responses are anonymised and published on our on-line disclosure log which can be found on the MoJ website:

The published information is categorised by subject area and in alphabetical order.

These statistics give the impression that the offence of illegally plying for hire only exists outside of London. In fact it is mentioned, that inside the London area it has been replaced by the more modern offence of Touting for hire by a private hire vehicle, under section 167(1) and (5) of the Criminal Justice and Public Order Act 1994.

But we have now been informed by LTPH in the Badge newspaper that an unlicensed driver, driving a licensed PHV was convicted of illegally plying for hire at Marylebone Magistrates Court.

An unlicensed minicab driver was convicted for plying for hire. Omar Gouaalla appeared at Westminster Magistrates’ Court on Wednesday 17 July 2013 and pleaded guilty to plying for hire as well as accepting a booking without holding a private hire operator licence.

Gouaalla was fined £200 for each offence, plus a victim surcharge. He was also ordered to pay £100 towards TfL’s costs. Quite a light fine, considering the a maximum fine is £7,000.

Gouaalla, was caught plying for hire by Transport for London’s (TfL) Taxi & Private Compliance team on 19 October last year at the junction of Wardour Street and Whitcomb Street. A TfL Compliance Officer saw Gouaalla assisting passengers into a licensed private hire vehicle. When Gouaalla was questioned by the Compliance Officer he admitted that he was unlicensed, the journey was not pre-booked and that he knew he should not have agreed to take the people.

All very polite, considering the compliance officers have no power to stop/arrest and can only report. The driver seemed very obliging in an area where NSL wardens refuse to issue tickets to touts for fear of violent attacks.

Helen Chapman, temporary General Manager of Taxi & Private Hire said:
"We welcome the court’s decision which should act as a clear reminder that breaking the law will not be tolerated and can result in a criminal conviction. This conviction has come about thanks to the important work carried out by our Compliance Officers, who are out every night of the week to enhance the safety of the travelling public in London."
Not very reassuring considering this is the first ever conviction for illegally plying for hire that TfLTPH have managed to bring to court in over 13 years. Compliance teams may be out every night of the week but have only concerntrated on doing badge and bill checks on licensed Taxi drivers. Little or no effort has been put into discouraging private hire vehicles from illegally plying for hire. One £500 fine in 13 years is not much of a deterrent. Touts have more chance of winning the lottery than being done for illegally plying for hire.
You can see the evidence nightly at the junction of Regent and Swallow where Minicab touts are left in peace by local wardens and TfL compliance teams. Even being allowed to park in and block the bus lane. 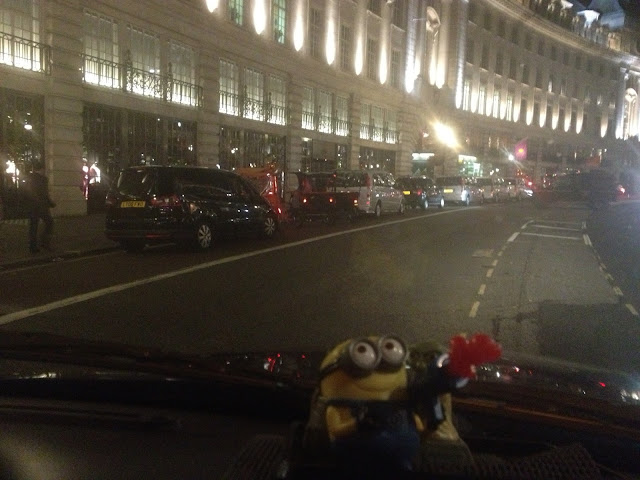 Posted by Editorial at 4:41 PM

'We welcome the courts decision', the man pleaded guilty so they had no decision to make!

Compliance at LTPH keep telling us they can only act against people who are licensed. They have no powers of arrest so quite how did this man get charged?

As ever more questions than answers, still lets not be pessimistic, at a conviction once every 13 years then we should clear up the problem in about 14 centuries!!!!!

It is very sad when you receive replies such as this from someone representing such a grand institution as the Ministry of Iustice. It is a sad reflection of the country that we are becoming.
The offences of plying for hire and touting for hire may be similar but they are not the same and the latter has not replaced the former! The writer would do well to read Oddy v Budbugs particularly the quote by Mr Justice Pitchford "I do not consider, in the light of these authorities, that the terms "plying for hire" and "soliciting" are co-terminous"