Council Give Green Light For Camden To Become 20mph Zone. 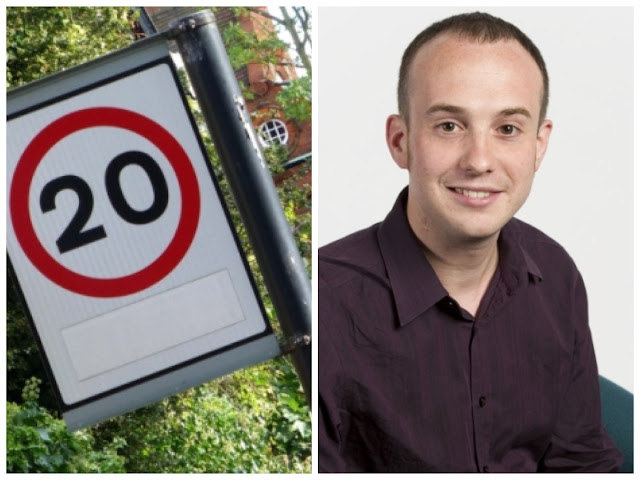 Camden sustainability chief Cllr Phil Jones says a 20mph limit will increase safety and encourage people to walk and cycle.
Members of Camden Council’s cabinet have formally agreed the proposals for the scheme following a six-week public consultation.
Results showed 67 per cent of those who took part supported the reduced speed limit, while 32 per cent opposed the change.
But some residents and motorists have expressed reservations about cutting the speed limit – claiming few motorists will adhere to the rules, while slower speeds are not necessary on some main roads.
In Camden, all roads managed by the council will be subject to the new speed limit, excluding designated red routes which are managed by Transport for London (TfL), such as the Finchley Road, and private roads.
A report outlining the new scheme cites statistics from the Royal Society for Prevention of Accidents which claims there is a 2.5 per cent chance of a pedestrian being killed when struck at 20mph, compared with a 20 per cent chance at 30mph.
Figures from the Department of Transport show there were 840 reported road accident casualties in Camden last year, including six fatalities and 108 accidents in which people were seriously injured.
It is also hoped slower speeds will reduce traffic congestion and encourage more people to walk and cycle.
Camden Council cabinet member for sustainability, Cllr Phil Jones, said: “Evidence shows if roads are slower more people walk and cycle and it’s also better for the environment.
“It also provides greater consistency for drivers. At the moment you can go from 20 to 30mph speed limits quite suddenly.
“Most motorists want to drive safely and they live in the borough with their families, so they also want a pleasant and safe environment for them to live in when they’re out and about.”
The cost of the scheme is estimated at £750,000-£1million, and it could be in place by the end of April next year. Police will be responsible for enforcing the new speed limit.
Source: Ham and High.
Editorial Comment:
Previous schemes have shown increases in congestion caused by limits set too low.
Since the 20 mph limit was introduced on Tower Bridge we have seen congestion escalate on all approach roads. The lower speed limit on Upper Thames Street had to be reversed as traffic almost ground to a halt.
Cllr Jones has said nothing about the fact that modern catalytic converters and diesel particle filters do not function efficiently at low speeds. It is feared by many that as councils adopt the blanket 20mph limit, area quality will deteriorate significantly
Local councils in central London have done very little to reduce emissions and the 4267 deaths every year from pollution continue. That's 80 people each and every week dying in London and yet absolutely nothing is done to avoid those deaths.
If it were a terrorist bomb going off every week killing 80 people something would be done.
If a bus or train crashed every single week killing 80 people then there would be an immediate investigation
If these deaths were cyclists, London would be shut down.
Posted by Editorial at 1:17 PM

Slow down traffic and cause 4267 early deaths and your an environmentalist
Knock down 1 proxy cyclist jumping the lights and your a murdering, polluiting Taxi driver who should be shot.

Perhaps we should be really safe and all
drive at "10mph" as we all ply for hire in Camden
at the same time!

Another policy to help and aid the agenda to encourage a total degenerate society.

Whatever happened to organisations like ROSPA. It’s and unarguable fact that speed and velocity has a direct impact on fatalities. However grinding the streets to a halt to accommodate the daily irresponsible habits of the capitals pedestrians is not the answer.

• Pedestrians run across the road at crossings at every set of changing lights in the capital every hour – this is something that needs enforcement attention (Fixed Penalty)
• Cyclist wear headphones and iPods while cycling, this should be outlawed
• More stringent fines should be issued for cyclists that jump lights and ride across pedestrian crossings while people are using the crossing.
• Pedestrians aimlessly walk into flowing traffic wearing iPods (headphones) ignorant of the danger they are putting their lives in. This should also incur a fixed penalty
• Riding a cycle when intoxicated should also carry heavy penalties.

As a small child we were taught to LOOK, LISTEN, then if safe, cross the road. Adults should know better - we are not dealing with children here, nor school zones; we are dealing with adults.
Mind you, most adults cannot drink sensibly; being drunk in public is no longer enforceable as ¾ of the country would be arrested on a daily basis.

The reason Camden want this 20MPH limit introduced is because they recognise their borough is festooned with drinking establishments selling liquor to pi#sed up irresponsible adults that are incapable of crossing the road morning, noon or night. The revenue from booze is God to the borough and the treasuries coffers. Death from pollution and drink related illnesses are considered to be collateral damage for future generations to pay for.

The other day I drove essex road at 20 mph I was overtaken 6 times called a w....r and given the bird sign just because I was sticking to the limit as for cyclists yesterday a ladie on a boris bike no helmet PREGNANt one hand on handle bars the other iphone texting going around the gas works sq in and out of traffic and if you or me had knocked her off public hanging would return its a joke funny how there's no helmet rule for cyclists I suppose it would of ruined boris bikes if you had to have one