Events for this Saturday: Planned demonstration by BNP

The MPS has this afternoon, 30 May, imposed conditions upon a march and rally being planned by the BNP forSaturday 1 June.

Conditions have been imposed under Section 12 and 14 of the Public Order Act, 1986, that the BNP march and rally must take place between 1300 and 1600, between Old Palace Yard and the Cenotaph in Whitehall on 1 June.

The BNP applied to hold a march and rally on 1 June from Woolwich Barracks to the Lewisham Islamic Centre.  The BNP’s intention to hold this march and rally resulted in a number of groups indicating they wished to attend to hold counter protests.

The information and intelligence available to the MPS meant that it was necessary to impose the conditions to prevent the demonstration from resulting in serious disorder, serious damage to property, and/or serious disruption to the life of the community.

“The murder of Lee Rigby in Woolwich last week shocked our city.  The right to protest is a fundamental part of our society, however, such an evocative mix of views being expressed in communities still hurting from Lee’s murder could have resulted in ugly scenes on our streets.

“Those communities have made it clear to us the impact that groups expressing extreme views has upon them.  We have listened to those concerns following Lee Rigby’s murder, and we will keep working with all our communities.

“We know that when groups with conflicting views come together it can create tension and disorder.  What we have had to carefully consider is how to balance the right to protest with the negative impact on our communities and potential violence and disorder that may have resulted from these protests going ahead as they were suggested.

“If you want to protest on Saturday we ask that you do so peacefully, no matter what your view.  We will work with you to enable that protest to go ahead.  What we will also do is fulfill our duty to prevent crime and keep peace on our streets.

“The support we have received so far from Londoners has been outstanding, I would urge people to continue to show restraint and calm.  We must continue to be a city that stands together.”

The decision to apply Section 12 and 14 of the Public Order Act was taken based on current community tensions, the current intelligence picture about Saturday and recent marches and protests held by similar groups. As part of the MPS assessment of current community tensions the views of a range of local representatives have been sought.  Taking all these factors into consideration the MPS has made an operational policing decision to take this approach, and believe it to be proportionate in these specific circumstances.

Attempts by the MPS to change the location of the protest via negotiation were unsuccessful.

Breach of the conditions is a criminal offence, and anyone breaching them may find themselves open to arrest.

The MPS Counter Terrorism Command is undertaking a complex and fast moving investigation into Lee Rigby’s murder.  Since the 22 May the MPS has been running an operation to provide extra reassurance patrols, and provide a response to any protests.

Other Events Planned for Saturday:

Demonstration by MQM supporters - a Pakistani political group. This follows the murder of a political party member several weeks ago in .

To keep up to date on events please follow the MPS: 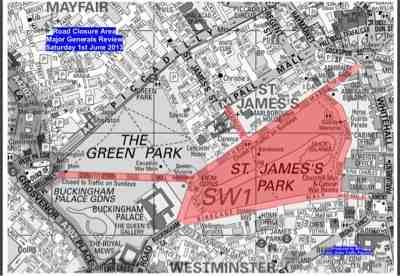 Posted by Editorial at 1:46 PM

Seems odd the old bill move the demo to. Location that has so much else going on.

Saves on overtime I suppose, I only wish they were quite as lively prosecuting illegal plying for hire and the sexual predators that hide amongst the activity.