Private Hire Drivers Who Don't Know The Regulations: Who's Fault Is It - Where Does The Buck Stop?

The law is quite clear. If you are a licensed private hire driver and you begin a journey without a booking, you are touting, you are also uninsured.

It is a requirement that for a private hire journey to take place, a pre-booking through a third party licensed operator must have been made.

It is the job of a licensing authority, to make sure every licensed private hire driver is made fully aware of all regulations before they are licensed to operate. In London, this duty falls under the responsibility of TfL's London Taxi and Private Hire (LTPH) directorate.

If you are caught touting by STC cab enforcement or the police, you will be arrested and charged. Sometimes the police will offer you an official police caution, which means are far as the police are concerned that is the end of the matter.

LTPH at present have a one hit and your out policy for touting, which means if you are charged and found guilty by a magistrate, you will have your license revoked. If you have chosen a police caution, it will be treated as an admission of guilt and LTPH will revoke your license.
This policy has been reinforced on a number of occasions in TfL notices.

But this statement has appears in the latest PHC magazine: 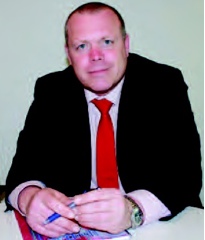 John Mason / Director / TfL’s Taxi & Private Hire department:
“Let’s be clear about something. If someone does accept a caution and we do revoke their licence, there is still an appeal process. I have personally intervened in cases where a driver has accepted a caution for touting and claimed that he had been mislead by the police. TfL accepted that he wasn’t fully understanding that he would lose his licence and that he wouldn’t have taken the caution if he had known. I intervened, looked at the case, looked at the background and his history and decided in his favour. I don’t want to go to magistrates’ court and I don’t want to spend money on lawyers!”

Yes let's be clear about something.
If private hire drivers are unsure of the most fundamental restriction they operate under, then the fault lies with their licensing authorities poor management and poor performance in educating the drivers in respect to their conditions of operation. In this case its LTPH.

No wonder touting and illegal plying for hire is out of control.


While we're on the subject of poor management and poor performance, perhaps Director of LTPH John Mason would like to make a statement about LTPH's reluctance to deal with Mr Gurdev Jassi's company Sky Express.

Many Licensed Taxi drivers ( mainly suburban drivers) have made complaints to LTPH about the companies continued disregard of the Private hire act that forbids private hire companies from using the words "Taxi, Taxis, Cab or Cabs" to advertise their services. The photos below were taken in Hillingdon Hospital and clearly show Sky Express using the words TAXI and Taxis.

To date nothing has been done about this contravention of the PH act.

We would also like to point out to Mr Mason that Sky Express is not a third party company that connect passengers with local services, they are licensed by LTPH as a private hire operator, ID 535: till 06/12/2016. 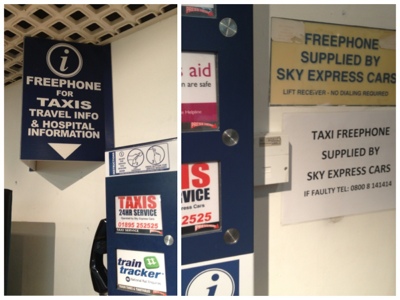 John, how can you take on more responsibility when you can't even manage the job you had.

Perhaps you should resign outright and give someone who can do the job, a chance of earning a 6 figure salary.

TfL get away with it because its my opinion that those who have the opportunity and yes the obligation to hold TfL to account singularly fail to do so, that my friends is the LTDA, LCDC and the London Taxi Branch of UNITE.

They continue to hold meetings that exclude those that might and refuse to let even their own members know what is discussed or challenged (or probably more correctly what is not challenged!)by insisting on proper publicly available minutes.

It's left to others including this blog to act in the trades and the public's interest to reveal what is going on.

We know TfL and others don't like it, they send solicitors letters, intimidate drivers who dare exercise their right to demonstrate and even invoke anti terrorism laws.

Well, what I do know is that once the Law Commission proposal become reality and 10000 PH from all over the UK flood in to London to assist their comrades outside the 000's of Satellites Offices created by TfL we might take notice.

When they and. take 000's of bookings at the soon to be abandoned Taxi desks at Heathrow, drivers may again take some notice if they do 12 hours in the feeder back that may still exist!

Until then there's always football on the TV', CTN, The Badge and TAXI and the next job to keep us occupied!

London is Different says the sticker, that's 100% correct, the London trade is being led over a cliff and and most won't realise it until they are halfway to the floor!

Is it true that the LTDA has held secret talks with BAA and decided on the trades behalf to do away with the booking desks?

So Mason wants Minicabs to have their own supply of PH stickers, and now he don't want to take them to court

Never mind about moving him, he should be sacked!

How much longer do we have to put up with this incompetence , this present administration can not handle the situation and have bowed under pressure from the Private Hire Sector.
We need big sweeping changes, and we need them now
Many drivers are facing financial ruin. There have been 3 suicide since Christmas by licensed Taxi drivers who's lives and families have been torn apart by these bumbling fools in Palestra.

We need change and we need it now.

Maybe we don't understand, he must be doing what his managers want and they do what Boris wants SO its clear now, Boris is no friend of the cab trade ( yes, yes neither was Ken )' .

so lets take the fight to BORIS!!!!

Its time you made some real changes to help the cab trade,we need to move away from TfL,im waiting for the yellow badge workshop review but I won't hold my breath for real change,no good cab trade talking to jhon if he's not listening,struggling to put food on the table.going under fast help.

John Mason / Director / TfL’s Taxi & Private Hire department:
“Let’s be clear about something. If someone does accept a caution and we do revoke their licence, there is still an appeal process. I have personally intervened in cases where a driver has accepted a caution for touting and claimed that he had been mislead by the police. TfL accepted that he wasn’t fully understanding that he would lose his licence and that he wouldn’t have taken the caution if he had known. I intervened, looked at the case, looked at the background and his history and decided in his favour. I don’t want to go to magistrates’ court and I don’t want to spend money on lawyers!”

Another example of T&PH bending their own rules when it suits.

Surely it is not for JM to decide the context under which a police caution is issued, or the 'validity' of such a caution.

Why would a PH driver admit guilt and accept a caution if they were innocent?

Also, it is not down to the police to explain to someone what the consequences of a caution means to them or their job.

No wonder the police can't be arsed to nick touts when T&PH refuse to even revoke their licence!

One strike and out? My arse. Another crock of shit from BoJo the Clown & Co.

And is Mason seriously suggesting impropriety on behalf of The Met when dealing with touts and issuing cautions?....'Misleading' innocent PH drivers into accepting a caution (which in effect is a conviction) for something of which they are innocent sounds very very serious to me.

If so, surely he needs to take it further!