Dear Mr Mason.
I know you don't like going to court or spending money on lawyers and I'm not surprised given your record in court against Private Hire Companies.

After patiently waiting for nearly two years and having seen the mess your legal department made of the water tight test cases against Diamond Chauffeurs Ltd, perhaps now would be a good time to try the approach I suggested back then.

I did warn at the time, that going after the PH company was in fact a mistake, as they obviously don't mind spending money on lawyers and tend to have better legal teams than TfL.

The only way to deal with this problem is by making mass hits on the ever increasing lines of illegally plying for hire minicabs, using the full resources available to you with the STC cab enforcement unit.

Once convicted, licenses could then be revoked and this would act as a deterrent.

Wayward drivers would be more apprehensive if they were being charged and convicted more frequently. At present they know they have more chance winning the lottery than being nicked for illegally plying for hire.

Also, another good piece of advice would be cutting back on the number of satellite office licenses, currently given out like confetti to anyone who can scrape together the licenses fee.

If you need any information on how to deal with illegally plying for hire, please feel free to contact the Richmond branch of the metropolitan police who have experience and success in this field. 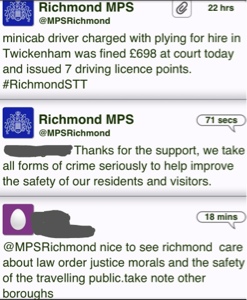 Posted by Editorial at 5:02 AM

New broom time again Leon.
Lets hope you use it properly this time

These bill gate articles are the definitive cab trade articles of the lat ten years!

It sure beats the sterile toadying tosh on TAXI, CTN and The Badge, only The Cab Driver attempts to print issues that matter.

Keep up the good work folks.

Would seem to be common sense; the minicab firms lawyers have run rings around the inept TFL teams, target the drivers aggressively for transgressing the terms of their licence and invalidating their insurance

TfL have acknowledged in a public forum that 'lines of PH vehicles outside venues are illegally plying for hire '.

Their inaction has been blamed on the weaknesses of the PH Act in London and other now non reasons since the action by the Met in Richmond.

So Messrs. Hendy, Daniels and Mason, no more excuses, no more threatening of Taxi Drivers who tell the truth or attempt to demonstrate etc.

Get your staff and yes even yourselves out on our streets and get protecting the public and even us the fee paying licence holders who give you a very comfortable living.

Take a copper along too!

I've seen this lady Sargent jump all over touts and has them out of the car and if they give her to much mouth she puts the handcuffs on .We need more like this Sargent more power to her if she can do it in Richmond why cant they do it in London.