TAXI drivers in Thanet are being warned to look out for a new kind of traffic.

The Taxis Against Trafficking campaign aims to raise awareness about people trafficking with questionnaires and bumper stickers. 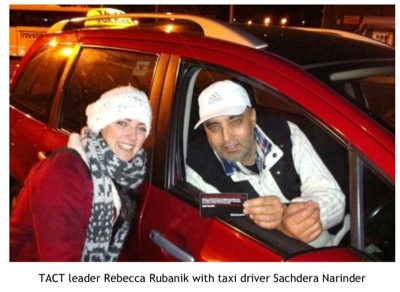 Active Communities against Trafficking (ACT) are groups of people that raise awareness about trafficking, how to safeguard yourself and others and what you can do about it.

Thanet ACT leader Rebecca Rubanik said: “We’ve decided to make it a regular event and will keep working with taxi drivers until every taxi in Thanet has a sticker and every driver is aware about the issue of human trafficking."

Cabbie Sachdera Narinder said: “All the taxi drivers need this help. We would be happy to talk to people like Thanet ACT group who will listen. Human trafficking is a real issue."

An estimated 9.1 million men, women and children are trafficked across borders and within their own country at any given moment in time.

It is the world's fastest growing crime, second to drug smuggling.

We all know it goes on and like the assaults robberies and rapes, a blind eye approach is applied.