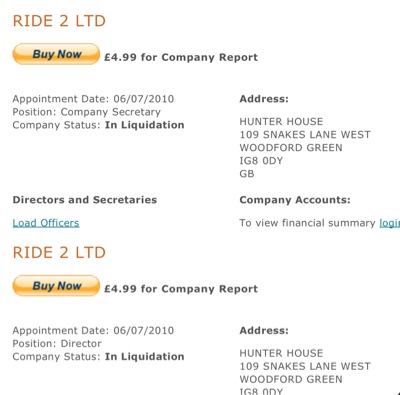 In 2012 the old Rides 2 Private Hire company went into liquidation under the directorship of 45 year old Vijay Khakhria. The Company traded from a registered company address in Wood Green.


So basically, the Ride 2 Ltd company is in liquidation: 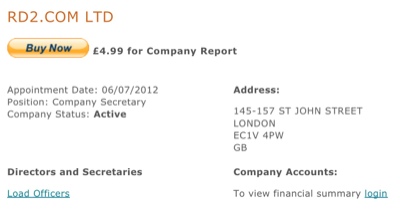 In 2012 a new company RD2.com was registered under the directorship of 76 year old Vrajlal Karsandas Khakhria. The company trades from an address in St John Street EC1

09/07/2012, the first company Rides 2 were issued 19 new satellite office licenses even though they are in liquidation.

09/07/2012, the second company RD2.com were issued with 18 new satellite office licenses even though the company only first register as a company, 2 days previous to the issue of the new licenses.


After making queries to TfLTPH, deputy director Helen Chapman confirmed by email on 05/10/2012:
"You are correct that it is now our policy that operators must have been licensed as a standard operator for at least one year before we will consider a variation to operate from a late night venue."

She then went on to justify the issue of new licenses to the new company by stating:
In this specific case the company name had changed but the director had been associated with the same business for a considerable period longer than a year.

This second statement from Ms Chapman is wrong. While we can see the surname name of the directors of both companies are the same, they have different first names(s), home addresses, different dates of birth, different director IDs and appear on close inspection to be two different people. This matter hasn't been investigated fully!

Director of LTPH John Mason in an email to his legal dept dated 01/03/2013 stated:
"This is misleading and was a transfer of licenses from one company to a new one"

Surely if the licenses were just a transfer they would have already existed and would have been dated prior to the formation of the new company. The Licenses, all new, run for a full term of 5 years and were issued just 2 days after the registration of the company. Also, in his email, Director Mason admits this is a "new company".
If I sold my car with nine months left on the road fund license, the RFL Tax disc automatically transfers to the new owner (unless I return for a refund). The DVLA do not issue a new license for a full term of a year.

I have made a number of complaints regarding this issue to TfLTPH and only ever received one reply, that from Helen Chapman, which was received personally by myself. John Mason's email was sent to his legal team and I was sarcastically copied in. After sending the email, Mason had a change of mind and twice tried to reclaim the mail, which failed.

Question: Why have LTPH issued 19 new licenses to a company that went into Liquidation in 2012, running a full term of 5 years, from July 2012 to July 2017?
Question: If this company is no longer trading, why are these licenses still showing on the LTPH Private Hire check site?
Question: Why did LTPH issue 18 new licenses to a brand new company with a new name, new registered address, new company director, just 2 days after the formation of this new company, in contravention to TfLTPH's own rules which state: A PH company must be trading for a minimum of one year before new satellite office variations can be issued?

THIS MATTER IS MISLEADING IN MANY WAY AND NEEDS TO BE FULLY AUDITED BY THE GLA.
We should then be given a full explanation of exactly what has occurred in this case.
We are entitled to the truth. The sums do not add up on this one. 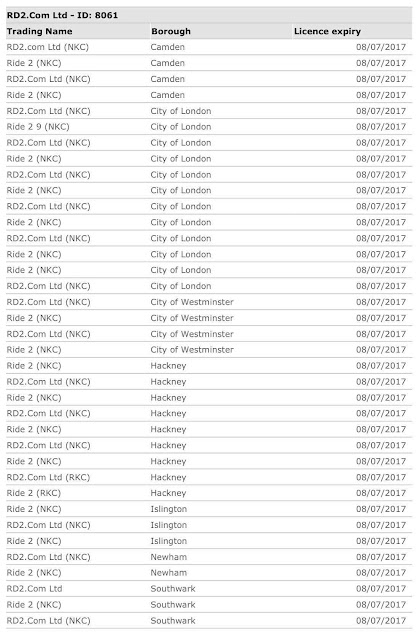 Posted by Editorial at 9:41 PM

A good bit of journalism better that the normal shit you put out.

Over the years a man has been investigating the corruption at FIFA. His name is Andrew Jennings and his investigations have been broadcasted on Panarama. Sepp Blatter & his cronies despise him as he has exposed them. Thomas the Taxi is the London Taxi Trade's version of Andrew Jennings and I would bet that the heirachy for LTPH at Palestra would wish he would go away, but like Jennings he leaves no stone unturned in his pursuit for truth & justice! Your doing the work that the UTG should be doing on our behalf! Keep up the good work Thomas the Taxi! SWBoy

Yet under cabwise the business operates from old street - http://www.tfl.gov.uk/tfl/gettingaround/taxiprivatehire/default.aspx

The information contained within your article exposes that John Mason has done something improper. By his own action of trying to retract email evidence, this in itself proves he was fully aware of the illegalities he had committed and went to great lengths to hide his wrong doing before it could be exposed. I would say that you have Mason and Chapman bang to rights here colluding in improper practice!

This just might be your best piece of work to date!

Well done James
These stories won't see the light of day in the Badge, Taxi or the CTN because part of the engagement policy is to submit any copy about TfL/TPH to be approved for publication. That's why all their news is stale.

Blinding research my son, keep up the fantastic work.

The net is closing!