A taxi driver who lived next to Tower Bridge for 37 years and invented a board game about the London landmark is to be given the chance to raise the bridge. 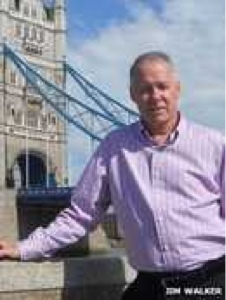 Jim Walker, 54, from Bexley, south-east London, was inspired to design the game Bridge Up as he drove over the famous crossing one day.

He called it "an honour" to have permission to raise the bridge.

His daughter Connie, 10, who played the prototype game with him, will help him press the button to lift the bascules at 15:30 BST.

They will make way for Sailing Barge Will, used for private charters.

Mr Walker, who has three children, grew up on the nearby Dickens Estate and said being allowed by the Corporation of London to raise the bridge was an honour.

He said: "I'm so chuffed. It's something I've always said I'd love to do."

He was told few members of the public get the chance to operate the bridge.

He came up with the idea for the game about two years ago and it is sold in the Tower Bridge gift shop.

Players answer questions about the bridge to collect lettered tokens and the winner is the first to race back to their dock and complete the words 'Bridge Up'.

Mr Walker said he has many fond memories of Tower Bridge and even remembers being able to smell the scent of cinnamon and pepper which came from the buildings once used in the spice trade.

As well as driving over the bridge countless times, he marched over it in a demonstration with printers as part of the Wapping dispute in the 1980s.

The landmark itself was opened in 1894, stands 61 meters high and is crossed by almost 40,000 people everyday.

Second board game invented by a Taxi driver.

The first one in the 70's was called Taxi and was a map of London which you had to negotiate your way around avoiding traffic.

It was just like being at work, but receiving fake money.

Family loved it, but to me was just like a bus mans holiday.

Wish this one all the luck, it looks pretty good!

Jim is a bright chap,Maxi the London Taxi is a cartoon chracter invented by him.

No need for cartoon characters now we have TfL!