Japan's Electric Taxis Falling Out Of Favor With Drivers

Two years ago, in February 2011, the city of Osaka introduced a fleet of fifty Nissan Leaf taxis. The deal was a cooperative arrangement between Nissan, 30 taxi firms, and the government--each was being subsidized to the tune of 1,780,000 Yen--over $21,000 at the time.

The car's would clean up Japan's clogged streets, an improvement on the ubiquitous, square-jawed Toyota Crown taxis used throughout Japanese cities.

Like many countries, the incumbent taxis are often chosen for their reliability and simplicity, rather than their comfort or driving characteristics. That's why New York is full of hardy Crown Vics, London's streets are crowded with rattling diesel black cabs, and Mexico only recently relinquished the ubiquitous VW Bug.

Would an electric Nissan really feel like the future to the average taxi driver. 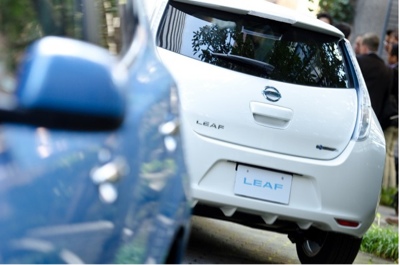 Turning tide?
However, problems have begun to emerge.
The first came in the wake of the Fukushima nuclear disaster, following 2011's earthquake and tsunami in Japan.

As we reported at the time, many people were worried that electric cars would be giving off the wrong image--conspicuous consumption of electricity at a time when power was in high demand and very short supply. Electricity is no longer seen as the clean, safe option it once was.

There are other issues too--the cars themselves.

While reliable, comfortable and smooth as ever, high-mileage drivers are finding degredation of the battery packs to be an issue.

Where a 60-mile range was once common in regular use, some are finding that cut to as low as 30 miles--and to save energy as much as possible, some drivers are shunning the car's heater in favor of chemical pocket warmers, and even blankets.

Degredation of the battery pack has also had an effect on the battery's ability to take a quick charge. A 15-minute charge has turned into a 40-minute one for many drivers. They can't travel as far, and they can't spend as much time on the road--and it's ruining business, for some. Customers requesting longer trips are even being turned down.

There's no get-out for the drivers, either. To qualify for the government's subsidy, the electric cars must be run for a minimum of three years. That's a year too long for some--“I’m getting out of this business,” said one driver, “This is no way to earn a living.”

Climate, driving routes and charging habits all make a difference to how well a car lasts, and the life of a taxi is never an easy one.

The main issue for Leaf batteries is still excessive heat, rather than cold (though cold climates do reduce the car's range). And as a recent survey showed, frequency of quick charging seems to have little bearing on a battery's life or health.

What it does suggest is that in some localities, electric vehicles aren't yet ready for heavy-duty tasks like taxi work.

While that's no consolation to the drivers losing business through degrading vehicles, progress can only be made by analysing these kind of trials--and it'll make electric taxis of the future much better suited to the task at hand.