UBICABS Offers Minicab And Taxi App, Hospital and Network Rail Taxi Services: How Can This Be Allowed? By Jim Thomas

How can this company keep getting away with breaking the law.
It is illegal to operated a minicab service without being licensed by TfL.
Private hire companies can not use protected terms such as Cab, Cabs, Taxi or Taxis. The law is quite clear and straight forward on this.

Some time ago I complained about a company (Ubicabs) providing freephones, advertising in major hospital as a "Hospital Taxi service". This same company advertises online as "Paddington Station Taxis", "Victoria Station Taxis", "Liverpool Street Taxis" and so on. It has many online adverts offering a Professional Taxi service.

The reply I got back from the director of LTPH was that nothing could be done because this was a third party who passes on bookings to local minicab firms and wasn't itself licensed as a PH company. 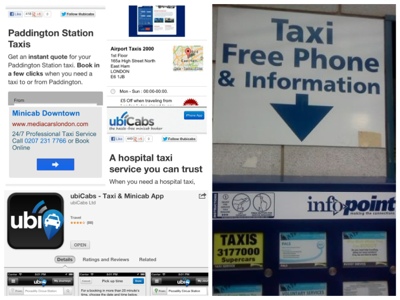 This unlicensed company UBICABS now has an app that takes bookings for minicabs and misleads the customers that they are getting a Taxi service, as this image from the app clearly shows... 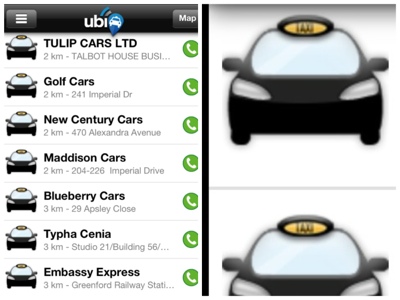 By offering a Taxi booking service wether online or in an alleyway off a high street, this company is acting as a minicab operator, wether it farms out the work or not.

The action of this company is tantamount to touting by an unlicensed minicab.

So why has nothing been done?
Why is nothing being done about this firm?
Why is it still operating with impunity?

Paul Bond, Vice Chair of the RMT, took up my complaint with LTPH:

Can we assume that if its a London PH operator who misuses the word taxi and fails to have such advertising withdrawn after contact from LTPH then their operators licence will be suspended?

Even if they use a 'third party' to display or place them on the web, they are no doubt paying for them to so do.

I can't call myself a medical doctor with impunity, even if I did use an advertising agency.

Director of LTPH, John Mason Answered Paul's Email:
You can assume that if a licensed Private Hire operator is in contravention of the Act and refuses to take remedial action when we raise the failure with them we will seek to prosecute them and any such failure to comply will be taken into consideration with regards to on-going fitness to be licensed.

I appreciate what you are saying but our powers do not extend to third parties, only those that we license. The use of a 3rd party isn’t excuse if, for example, that third party has designed the operators website or publicity but it does get tricky where a search engine returns a PH operator when someone types in “taxi”.

Paul then Replied:
Can you confirm if TfL have ever taken any such action against a London PH Operator passing themselves off as Taxi services or using 'protected' term?

TfL need to be asking the Met. to prosecute Google/Microsoft etc. for touting as they are the enforcing authority for the non licensed? No one is above the law and the intentions of Parliament by statute.

Maybe even a letter from yourselves would make Google et al do something, as per my example you dont see bogus UK doctors or barristers etc. on there so they must have some control about who can state what..

The examples I sent to Mr Mason are not the result of a search engine such as Google or Microsoft, they are the direct result of a company who is purposely confusing the public into thinking, they are booking a Licensed Taxi service. If This company is not licensed to offer a PH or HC Taxi service then it is breaking the law and one would expect Mr Mason, in his role as director of Licensed Taxis and Private Hire, to contact the Proper authorities on our behalf.

If LTPH can't stop Firms advertising a Taxi service in Hospitals/Supermarkets Clubs and bars,
If LTPH can't enforce against lines of minicabs illegally plying for hire outside venues,
If LTPH can't protect against contraventions of the Hackney Carriage and Private Hire acts,

What are we paying for in our license fees? 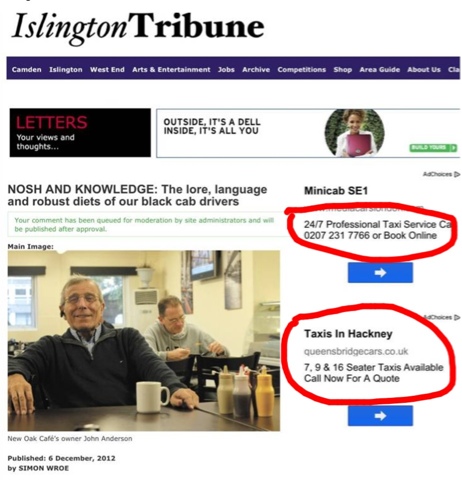 Congratulations Jim for keep bringing this to our attention
The UTG have done nothing about this, nor has our man on the TfL board
Not a word in the Taxi, CTN, the Badge, Taxi Globe or any of the trad media journals

Well done to the RMT for taking this up

Every time TfL are asked to do their duty they come up with an excuse for inaction. They say they can't enforce illegal plying for hire as PH vehicles cannot easily be identified. Well they set the conditions so let's have a NO BOOKING! NO RIDE sticker on them all. They did it for us with the identifiers.

The truth is that the money rolls in, the UTG get their stand down pay so say nothing, so LTPH don't have the motivation or moral courage to enforce the law.

However all is not lost, the GLA members,MP 's on all sides are now becoming increasingly concerned about the secretive, unaccountable monster that Hendy has created.

There are cab drivers and trade groups out there who are asking the right questions in a polite but firm way, we need more to do this so we can gather a 'dossier of shame ' for the inevitable enquiry .

Why are you Taxi Drivers keep harassing the LTPH Director, John Mason for, if you lot keep harassing LTPH for no apparent reason the law will change one day so that Private hire minicabs and taxi, cab etc be in the same category MEANING THEY CAN USE CAB AND TAXI TOO what would ypu say about that you lot need to stop the hating and work together

I think that there must be differentiation between Taxis and mini cab in some way as the latter are only allowed to run pre-booked services but I don't think that just the use of the word "Taxi" should be the definition of the black taxi cabs. Many international tourists do not know what the difference is just by the name as in any other country Taxi is a Taxi - mean of transportation on metered per mile/kilometer charge.