Having survived the Blitz as well as the addition of ballast in the form of an unexploded bomb, a car thought to be the sole surviving Morris London Taxi will make the journey to Brooklands for Historics’ spring auction on Saturday, March 9. 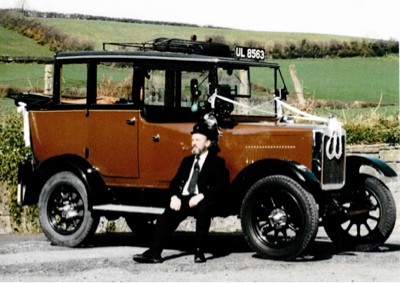 Originally an export model called the Empire Oxford and designed to boost overseas sales, poor demand from abroad meant many of the 1,700 vehicles manufactured were returned to the UK, with 840 re-commissioned for commercial use.

Built in 1929, UL8563, nicknamed Uncle Lima, saw 10 years of service accruing fares in the capital, before it was purchased by a farmer and adapted for use as a tractor to support the war effort.

During routine army maneuvers the hay rake it was pulling collected some scrap iron, which the farmer opted to add to the back of the vehicle to give greater stability, but when Uncle Lima was put up for sale postwar, the scrap iron was removed and discovered to be two unexploded mortar bombs and an anti-tank rocket.

Following restoration and a return to its former guise, Uncle Lima made a public appearance at the 1975 Commercial London to Brighton run, and has been in constant use since, competing at numerous rallies and events, as well as being put to good use as a family wedding car.

Featured in a book by Bill Munroe titled A Century of London Taxis, the car also appears in a 1933 motoring magazine advertisement used to paint a picture of typical London lifestyle, perfectly illustrating the historical significance of the last remaining Morris London Taxi.

Although based largely on the Morris Oxford, scaled up to fit a modified 13cwt lorry chassis and running gear, most of the Empire parts were retained and incorporated into the new cab, including the 15.9hp engine (2513cc), the four-speed gearbox and an overhead worm drive rear axle.

Strict regulations set by the Public Carriage Office led to a number of design peculiarities, with all cabs required to carry hay and water for a horse. Uncle Lima accommodating the hay in a box on the running board and water in the radiator.

Granting privacy to passengers, the car was prohibited from having a rear view mirror, while the folding rear hood was designed as a safety feature, allowing swift escape in the event of an accident, and the door handles were recessed to prevent injury in the event of a door slamming shut.

With Morris celebrating a century since the introduction of its first car, the Morris Oxford “Bullnose,” this unique car comes to auction with a comprehensive history file and a full MOT. With plenty of life to live and potential fares to take, Historics is anticipating strong interest and estimates offers in the region of £25,000 to £30,000.

Posted by Editorial at 6:58 PM