Judge Spares Paedophile Jail, Because He Was Taught At Islamic School, Women Are Worthless.

A muslim who raped a 13-year-old girl he groomed on Facebook has been spared a prison sentence after a judge heard he went to an Islamic faith school where he was taught that women are worthless.

Is this the reason we see so many young women sexually assaulted by Muslim men in this country.

Adil Rashid, 18, claimed he was not aware that it was illegal for him to have sex with the girl because his education left him ignorant of British law.
In every walk of life in this country, ignorance of the law is no defence.

Yesterday Judge Michael Stokes handed Rashid a suspended sentence, saying: ‘Although chronologically 18, it is quite clear from the reports that you are very naive and immature when it comes to sexual matters.’

My god this man is a criminal rapist and the judge hands him the opportunity to repeat his heinous crime, because the accused was naive and immature. You just couldn't make this stuff up...

But the judge said that because Rashid was ‘passive’ and ‘lacking assertiveness’, sending him to jail might cause him ‘more damage than good’.
Rashid, from Birmingham, admitted he had sex with the little girl, saying he had been ‘tempted by her’ after they met online.
So you could argue that Rashid was assertive enough to groom, meet and rape the 13 year old girl...

They initially exchanged messages on Facebook before sending texts and chatting on the phone over a two-month period. Typical grooming practises.

They then met up in Nottingham, where Rashid had booked a room at a Premier Inn.
So, the rape was in fact premeditated...
The girl told police they stayed at the hotel for two hours and had sex after Rashid went to the bathroom and emerged wearing a condom.
Not bad for a passive rapist, lacking assertiveness...

Surely every muslim applicant for a job which involves dealing with female members of the public, such as a private hire license, should be required to attend special re schooling where they could be taught that women in this country are of equal standing to men and do not deserve to be the target of sex attacks, no matter where the applicant was schooled 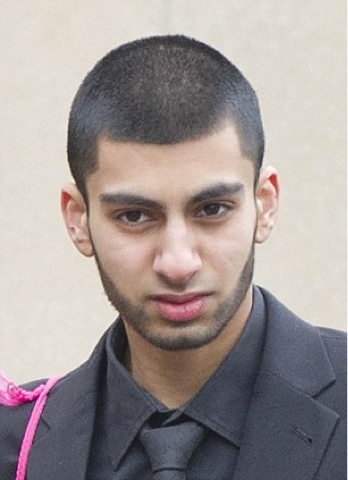 Ignorant: Rashid (pictured above) didn't know it was illegal to have sex with a 13 year old girl.
If this is Justice from the law, then in the words of Dickens, "The Law is an Ass."

Posted by Editorial at 9:07 AM