IMPORTANT Public Consultation From 2006: how come no one asked us?

Work has started on a completely new concept for the Euston underpass junction. There appeared to be a public consultation in 2006. Below is an excerpt from that consultation. 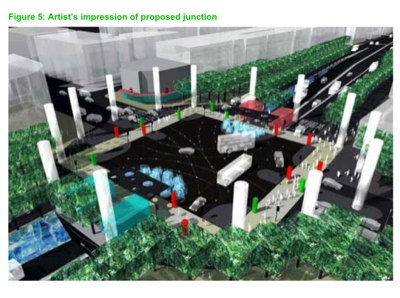 Dear Sir or Madam
Camden Council and Transport for London are asking local groups and directly affected residents and businesses for their views on:

This booklet describes the proposals and the impacts. We are still working to find funding for them. Enclosed is a separate questionnaire for you to complete so that we can gauge support for the project. If there is sufficient support, there will be further opportunities to comment on the details. We believe these proposals would greatly improve the Euston and Bloomsbury area for all.

Background
The Council and Transport for London believe that the junction of Euston Road and Tottenham Court Road is an important place and the improvement of Euston Road and the surrounding area has been identified as a key objective. The site serves a number of functions. As well as carrying a great deal of traffic, it provides access to and from major employment, retail and residential areas, two tube stations and a major hospital. Such a significant site in central London should be a safe and pleasant environment for everyone who uses it.

The proposals for this consultation result from discussions with architects, urban designers, London boroughs, local landowners and stakeholders, the Greater London Authority and Transport for London. They are about giving space back to pedestrians and creating new public spaces, and are the first stage in meeting the objective to make the most of Euston Road and the surrounding area, making it a more pleasant place to live, work and visit. They help to change the main junction from an unfriendly place where it is difficult to cross, to a junction that is easy and simple to cross, and where traffic no longer dominates.

Proposals
Euston Road/Tottenham Court Road/Hampstead Road junction
• Covering part of the underpass to create new public space above the road with possible room for shops and exhibition areas.
• Using some of the space taken back from traffic, to plant trees.
• Making it easier to cross Euston Road by reducing the complexity of the junction from
thirteen individual crossings to just eight.
• New paving at the junction and in the surrounding area. 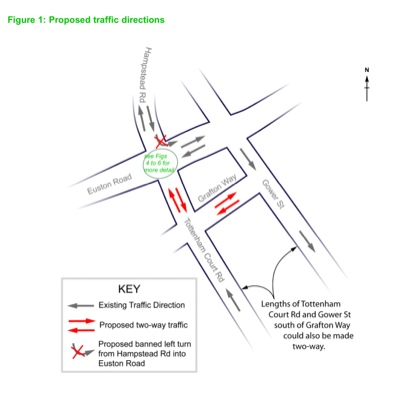 The introduction of two-way traffic helps to make the junctions simpler to use, but also opens up the possibility of introducing two-way traffic on all or part of Tottenham Court Road and Gower Street/Bloomsbury Street. Although this has not yet been designed, this consultation also asks for your views on whether you would support this further stage, in principle. Camden and Transport for London believe that this would have significant benefits.

If the work proceeds there will be additional consultation on this proposal. However, we would welcome your comments at this stage.

Source: public consultation 2006:
To see the whole of the consultation booklet please click here
Posted by Editorial at 4:24 PM

That's 7 years out of date James. Tfl has the watered down one. Thanks awfly