After spilling his wine, James Pilgrim suddenly turned on 52-year-old Hastings Taxi driver Lee Curtis. Throwing multiple punches, he grabbed him in a head lock and proceeded to bite him on the face. There can be absolutely no excuse for this type of unprovoked attack.

The physical signs of this attack, which took place three weeks ago will fade, but mental scars take far longer to heal. It is unclear whether Mr Curtis will ever again be able to face driving a taxi.

Nobody should have to fear abuse, physical or verbal, when at work, or indeed fear for their life, as Mr Curtis did, and yet for taxi drivers in recent years, this threat is increasingly a reality.

In the last three years, assaults on taxi drivers have gone from extremely rare occurrences to almost commonplace -though thankfully most attacks are not so severe.

It's thanks to the CCTV installed in Mr Curtis’ taxi that the perpetrator was swiftly brought to justice.

CCTV should be mandatory in all taxis. Unfortunately there are many protest groups who argue against, as they say this is in breach of their privacy.

Having CCTV footage to refer back to protects not only the driver, but also the passenger. Any disputes can be resolved quickly by watching the tape back, and if a crime is committed the footage can be used as indisputable evidence.

Of course, CCTV is not the solution to the problem of violent acts being committed in the first place. All Taxis which unlike private hire, pick up mostly unbooked, unrecorded passengers from the street or licensed Taxi rank, should be fitted with attack proof partitions like the ones used in London's Taxi Fleet.

However CCTV is a positive move forward that could provide an extra layer of protection to every licensed Taxi driver, nationwide.
Posted by Editorial at 5:32 PM No comments:

London 2012: Olympic bosses admit to hiring too many helpers

Olympics bosses have said that they have taken on too many unpaid volunteers for the Games.
In particular, they have been “astonished” by the low demand from VIPs for volunteer-chauffeured cars.
So few of the BMWs are being used that many of the 9,000 drivers have been left twiddling their thumbs for large parts of their 10-hour shifts.

After complaining to bosses, many are now being given days off so they can fill empty seats in venues and enjoy the sporting action.

Some 70,000 people became Games Makers, with roles from stewarding crowds to mopping the handballs courts. A source said that while the vast majority were content, more than 100 did not turn up for their second shift, frustrated with the nature of their work.

A role as a volunteer driver was seen as one of the most prestigious tasks, with several days of training given on how to meet and greet clients and navigate the Olympic Route Network.

Last week Richard George, director of transport at Locog, sent an email to drivers who take VIPs from hotels to venues. He wrote: “I think it is fair to say that we have been astonished at how low the demand for our services have been so far ... We are therefore now looking at additional roles in which you can be employed so your valuable time is used to best effect.”

He added: “We will build on some of the feedback you gave me — that most of you would prefer to have ‘days’ off rather than shorter shifts ... I get that completely — somewhere out there is some great sport to watch!!”

The lack of use of official cars is likely to raise questions on the need for the Games lanes of the Olympic Route Network which are reserved for vehicles on Games business. 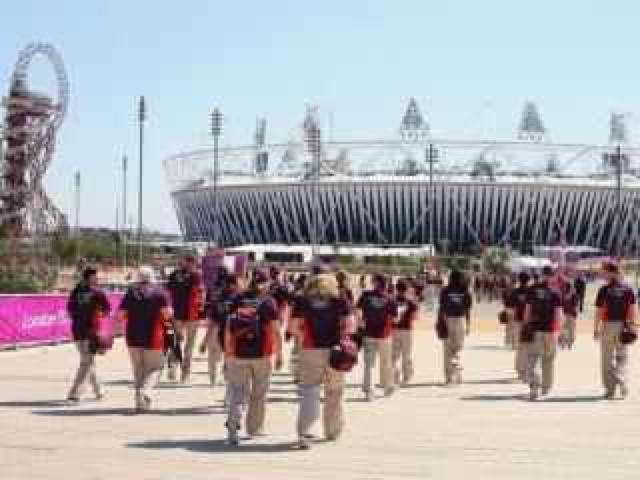 Posted by Editorial at 4:05 PM No comments:

This is the NV200, Nissan’s take on the classic London black cab which will go on sale in 12 month’s time. The new vehicle aims to both finally break the hold the classic LTI taxi has on the market and dramatically undercut the new Mercedes black cab on price.

Powered by a 1.5-litre, Euro V, diesel engine in either 90bhp or 110bhp guises, the new cab will be priced from £28,000. In manual transmission form, the NV200 is claimed to offer "50 per cent" better economy than today’s most economical London cab, which is expected to translate into a figure of around 42mpg. Nissan is also working on an automatic version of the new cab.

Nissan claims that this engine will save the average London cabbie about £1000 per year in fuel as well as seeing a significant reduction in particulate pollution. This is seen as essential by London Mayor Boris Johnson, because London blacks cabs travel around 230 million miles per year and, although there are only 22,000 black cabs on the road, they are responsible for 20 per cent of the particulate pollution in the capital.

Nissan will also begin testing an all-electric, battery-powered, version of this London cab in 2013. Nissan says it was inspired to break into the British market for London cabs after winning the competition to supply the new-generation taxi for New York, which is also based on the NV200 van.

Competition in the London cab market has been strictly limited because of the regulation that requires cabs to have a tight 25ft turning circle. Nissan has managed to achieve this in a front-drive vehicle by re-engineering the front suspension.

Bolted to the bottom of the NV200’s McPherson strut is a similar ‘wishbone’ attachment to that used on Vauxhall’s HiPer strut. The drive shaft is split into two, with a second universal joint mounted on the lower wishbone. This means the drive shaft attached to the front wheel is very short, allowing the wheels to turn to a much more acute angle than conventional front-drive vehicles can manage. This set-up means that the front track is now about 200mm wider than on the donor NV200 van.

Features include twin sliding doors to boost passenger access, and a ramp into the rear to enable easy wheelchair access.

Nissan sources say that they expect the normal UK-wide market for London cabs to significantly expand from today’s annual volumes of between 2000 and 3000 per year. New scrappage rules aimed at taking the most polluting vehicles off the market come into force in London. At the end of this month, any black cab over 15 years old will no long be able to be licenced for use. 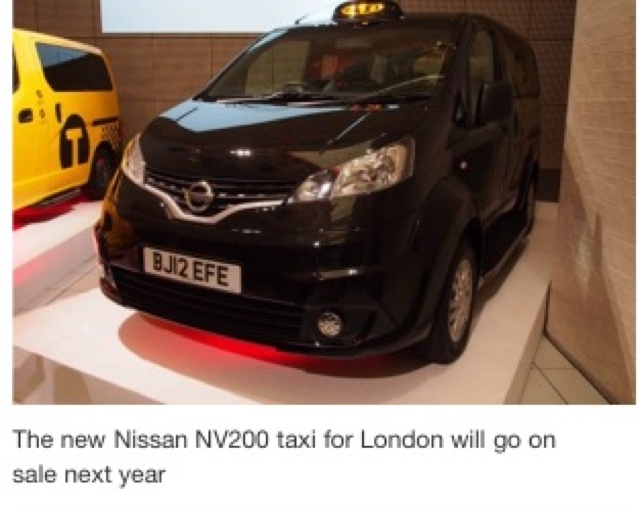 Posted by Editorial at 2:05 PM No comments: