The fleet of three low-emission cabs was introduced to ferry VIPs and officials during the Games.


But the hydrogen fuelling station, at Lea Interchange near the Olympic Park, has had to close for security reasons.


The consortium HYTEC, which provided the taxis, said a new station was expected to open at Heathrow soon.


In the meantime, the taxis are loaded on a transporter to make the trip to the nearest filling station at car manufacturer Honda's plant in Swindon.


"While arrangements for a hydrogen fuelling station at Heathrow are being completed we are using an alternative fuelling site in Swindon.


"However we expect a new fuelling station at Heathrow to be operational very soon and certainly before the end of the London Olympics."


Richard Kemp-Harper, from the government-run Technology Strategy Board, said the situation was "short term".


"The benefits for those taxis - apart from showing off some great British technology to the rest of the world - is actually that they produce water out of their tail pipes," he said.


"So the particulates and air quality - it's a big difference for London even if there's a small carbon problem with having to ship them up to Swindon to pick up hydrogen at the moment."


The fuel cell centre at Honda's South Marston plant was opened in September.


It is the UK's first commercial hydrogen filling station and is operated by industrial gases group BOC. 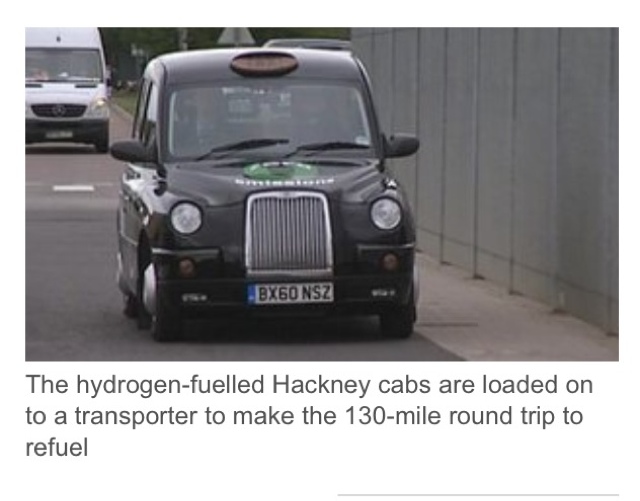 Posted by Editorial at 1:10 PM No comments:

The Iconic London Taxi featured prominently in the Olympics Opening Ceremony last night, in a scene in which James Bond was taken to meet the Queen at Buckingham Place by a London Black Cab.

Unfortunately London Mayor Boris Johnson does not hold the London Taxi in the same high esteem and has excluded taxi drivers form providing their world renowned professional service to visitors, athletes and officials for the Olympics in London.

Despite protests which have now taken place for more than a year The Mayor has refused to relent in his decision to refuse Taxis to access the Olympic Route Network, which effectively prevents them doing their job.
He has instead chosen to allow Corporate Sponsors and many others less deserving than the taxis have full access to the ORN which has been done under the false premise that it is to enable athletes and officials to be transported to the Games. Most athletes and Officials are located at the Olympic Village and will compete at the Olympic Park will have no requirement to use the lanes. Everyday hardworking Londoners, including Cabbies are sat in static traffic queues while the near empty Olympic Lanes see Corporate Fat Cats being whisked to wherever they want to go in minutes. Probably taking their wives shopping in the West End !.

The Mayor Boris Johnson, who is also Chairman of Transport for London has said that it is not in his remit to allow taxis into the Olympic Lanes. He said it was the responsibility of LOCOG, who are a private limited company and have no requirement to comply with Public Law or act in a reasonable way. LOCOG therefore has no accountability and will probably not be in existence after the Games.

Cabbies Against Boris are extremely keen to see the situation resolved in a reasonable way without the need for further protests and contacted the Olympics Minister Hugh Robertson who had previously said on the BBC Politics show a week ago that if there were problems the ORN would be reviewed. His Personal Secretary stated that Mr Robertson’s position is that it was not his responsibility and we were told to contact the Department of Transport.
We were then referred to Mr Jonathan Sharrack, The Department of Transport Olympic Director who politely called back immediately but said that the position of the Department of Transport was that this was firmly the responsibility of the Mayor and Transport for London.

This begs the question’ Why has the Mayor deliberately acted in a way which is to the detriment of most Londoners and the taxi drivers?’
He has continually be involved in situations which cannot possibly be conducive to a trustworthy Mayor.
He had personal meetings with Rebecca Brooks CEO of News International, when she was being investigated by the Police for the Phone Hacking Inquiry, for which she now faces criminal charges. He actively tried to stop the Police investigation and even said in the London Assembly that the allegations were ‘codswallop’.
He then had personal meetings with his friend Bob Diamond the Barclays bank boss and arranged the £50 million sponsorship of his ‘Boris Bike’ scheme. Barclays are now being investigated for criminal activities.

Boris introduced an Age Limit for London Taxis which will do nothing to reduce emissions as it was purported to do and has put hundreds of Taxi Drivers out of work. The only benefit for the Taxi Age Limit is to increased the sales of new taxis.
Boris implemented the Age Limit after it was proposed by his close Conservative colleague Mr Tim Yeo who is Chair of the Environmental Audit Committee. Mr Yeo is also Chairman of Eco City Vehicles who sell the new taxis that drivers are forced to buy at a price of more than £35k.

The improper conduct of the Mayor should be fully investigated and a Public Inquiry was formally called for by all of the London Mayoral Candidates earlier this year, in particular to the thousands of deaths from Air Pollution in London caused by the failed Air Quality Strategies of the Mayor. His own statistics show 4267 deaths a year in London from pollution.

All complaints of corruption to the Metropolitan Police Commissioner have been ignored. Hardly surprising as the Metropolitan Police are directly answerable to the Mayor himself and he is notorious for influencing what they do as in the News International case.
The Prime Minister David Cameron has made statements following the corruption in the Media and Banks that ‘cronyism’ and corruption should be stamped out. Let’s hope that principle remains firm in the case of his close friend and secret society Bullingdon Club co-member Boris Johnson.

The current refusal to allow London Taxi drivers to work effectively during the Olympics is the latest in a long line of improper decisions by the Mayor against taxis drivers,
During his election campaign earlier this year he said he was going to confront the unions so maybe this is his way of doing that. He is using the Olympics as a way of imposing extra ordinary measures to challenge taxi drivers.
At yesterdays Hyde Park taxi protest one driver was told by a Kent police officer to leave Hyde Park Corner via the Knightsbridge Exit. He informed him that his senior officer had given him instructions to:

"Inform him and any other London Taxi drivers taking part in the demonstration to leave Hyde Park Corner immediately and that his registration number had been logged. Should he make another circuit of Hyde Park Corner, or return to the location he would be arrested immediately under section 12 of the Anti Terrorism Act!"

This is blatant improper use of the law for improper means.
TFL’s Leon Daniels claimed after the previous protests at Parliament Square and Tower Bridge that the demonstrations were ‘ by a handful of drivers. At the same time TFL turned off the traffic camera news feeds to Tower Bridge so that the media could not see how many taxis were there in a further blatant attempted deception. Unfortunately for Mr Daniels the worlds media were there to see for themselves to see that there were many hundreds taxis protesting and he must feel silly making such a false claim.

The refusal to allow taxis to use the Olympic Route Network and the many other improper decisions of the Mayor are likely to be fully scrutinized and exposed by the worlds media during the next couple of weeks.

In the meantime London’s Cabbies will continue to protest.
Dave Davies
Spokesman – Cabbies Against Boris

Posted by Editorial at 7:37 PM No comments: