Darren Johnson represents the Green Party on the London Assembly:

I will be interested in turn out for cabbies against Boris on Monday. My taxi article on the mayorwatch blog, shows how they were taken 4 ride.

I have spent the last decade raising concerns about the impact of air pollution on Londoner’s health and the failure of politicians at all levels of government to do something about it. I am a Green Party member of the London Assembly. 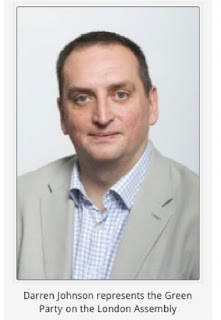 It is one of things I am elected to do.
I use the figures produced by London Mayor, to highlight the link between black cabs and air pollution, because cabs are responsible for nearly a third of particulate pollution in central London.


It harms the drivers, their customers and many other Londoners.
The result is that I get a lot of grief from cabbies who feel that I am always having a go at them. I’m not complaining about it. I can understand their reaction. Their cabs are their livelihood and for owner drivers it is a huge investment. When I highlight the need for new regulations or pollution tests, then they worry about who is paying the bill for it all.


Just for the record, I want to point out that on the issue of air pollution and how to deal with it, I have a better track record of asking the Mayor questions on behalf of people involved in the cab trade than any other Assembly member. If you don’t believe me, then just follow the links in this article.
When black cab drivers complain about the Public Carriage Office and Transport for London letting you down, I can understand many of their concerns. It has been a two-mayor problem in that neither Ken Livingstone nor Boris Johnson has moved fast enough or far enough. A whole series of mistakes has been made along the way by the PCO and both the current and former Mayor in handling London’s air pollution problem.


The biggest let-down is that innovation has been blocked, partly because of the rigid adoption of conditions of fitness which favour a monopoly provider. More fuel efficient alternatives (with less CO2 emissions) to the TX series have been consistently blocked because of the PCO clinging to the turning circle.


I have pushed both Ken Livingstone and Boris Johnson to put the environment first on this issue, but neither responded and cab drivers are now faced with having to sell their old vehicles and buy one of the expensive and still polluting TX series.


The infrastructure for gas fuels, like LPG, has not been supported. TfL have shown little willingness to support those drivers who for several years have wanted to reduce pollution by switching fuels, rather than buying a new vehicle. Instead, cabbies have been required to fit clean up devices of dubious worth.
I have asked over 20 questions of the Mayor, establishing that these filter devices only work properly when the engine is cleaned to high standards, but no checks are made on whether this is done. The devices remained untested on the road where they are faced with working under load.


The lack of such conformity testing and rigorous ‘on the road’ tests, have supported a tick box culture within the PCO, which has failed to deliver on pollution reduction. The result is the 15 year age limit ban, which the mayor has been forced to introduce.


The Mayor’s push for an electric taxi attracts column inches but in the short term (and the timescale set for reducing pollution by the European Commission) sadly they will contribute very little towards real change.


Hybrid devices designed to fit existing engines sounded the most promising innovation of all the solutions to tackle air pollution in the short to medium term, when I discussed it with TfL back in 2007 & was being taken forward when Boris was elected in 2008. This device was cheap to install and designed to keep the engine ticking over when the taxi was idling.


Given that the cabs in inner London spend the majority of their time idling, rather than moving, this could potentially have been a cheap and very cost effective way of cutting down pollution dramatically. Unfortunately, the TfL procurement process was faulty and was challenged. Since then, the Mayor’s office has simply dropped the project, despite the obvious benefits to cab drivers.


This decade of failures by both mayors and by TfL has led to the current mess we are in. Pollution in London has not reduced fast enough and black cabs are still one of the major problems, despite the efforts by people involved in the cab trade to put forward positive solutions.


The failure of the Mayor to help fund a scrappage scheme for drivers forced to sell their old cab is just another let-down. However, if pollution levels do not get reduced quickly then expect the 15 year age limit to turn into a 10 year age limit.


One area where black cabs drivers must take the blame is when they got Boris Johnson to make the abolition of six-monthly inspections a manifesto commitment. It may have saved cabbies a bit of money in the short term, but it has done long-term damage to the credibility of both the Mayor and the cab trade.


Over 2,300 cabs a year were being pulled up and fixed, as they did not even meet the minimal standards that we have. Given the number of cabs pulled off the road and cleaned up, scrapping the test sent out a very negative message that many cabbies really don’t care.


My advice to everyone involved in the cab trade is don’t make the same mistake again. Cabbies should be demanding that their health and that of their passengers, is protected. The solutions are there, we just need the political will to make it all happen.

Status: The consultation for this project is due to open in early May 2012

We are reviewing the existing framework of taxi and private hire vehicle regulation with a view to preparing proposals for consultation.

Taxis and private hire vehicles (PHVs) are an important part of local transport. They operate in highly regulated markets where safety and quality control are paramount. Licensing covers key areas such as the quality of services, the fitness of drivers, fare regulation and restrictions on the number of licenses issued.

The current law on taxis and PHVs has been criticised for being complex and outdated.

One problem is the multiplicity of legislation. Taxis, which can “ply for hire” so customers can stop them in the street, have different rules to PHVs which can only be pre-booked. In turn each of the taxi and PHV trades is regulated by multiple statutes. There are also different legal systems along geographical lines distinguishing Plymouth, London and the rest of England and Wales. Whereas some distinctions are clearly justified others are less clearly so.

Some of the legislation, particularly relating to taxis, is archaic. The key statutes date back to Victorian times and refer to “hackney carriages” when taxis were literally horse-drawn vehicles. Case law and guidance are indispensable in interpreting the law. This also makes the legislation less able to reflect more modern technology like the telephone, internet and GPS technology.

The project examines the legal framework relating to taxis and PHVs with a view to making it simpler and more modern. We aim to publish proposals for reform in early May 2012. This will be followed by a three month consultation period where we invite the public to respond to our proposals. We plan to publish a final report with our recommendations and draft bill by late 2013.

Posted by Editorial at 3:30 PM No comments: 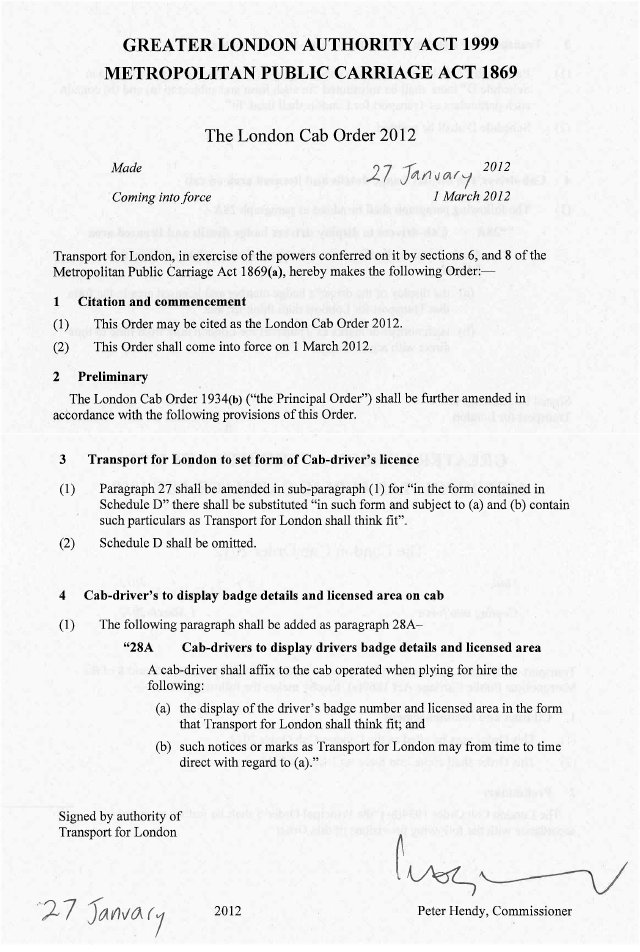 Posted by Editorial at 3:17 PM No comments: