It would seem that TfL will be carrying on their bias treatment of the Licensed Taxi Trade in true Olympic fashion (so much for legacy) by refusing any temporary Taxi ranks to facilitate the publics safe removal from the restricted areas on New Years Eve.

The Rickshaws they say they want to ban will of course be given full access to the forbidden zone. Police will again (as they do most nights) be turning a blind eye to the lines of minicabs, illegally plying for hire around the periphery.

Below is a letter from the Mayor, sent to residents contains important information about restrictions that will affect them as residents or businesses on New Year’s Eve 2012.

The Mayor of London has once again commissioned a New Year’s Eve fireworks display at the London Eye.

FIREWORKS DISPLAY
The display will follow a similar pattern to previous years, with music and a countdown as midnight approaches, followed by a ten-minute firework display at midnight.

Due to the popularity of the event, everyone will need to be prepared for large crowds and to plan well in advance to ensure they have a safe and enjoyable time. Only a proportion of the several hundred thousand people in central London will be able to watch the fireworks in the official viewing areas, which will close as soon as they are full.

We will, once again, be putting in place a number of measures to ensure that all of those wanting to access the event area will be safe. These measures will affect traffic, public transport and pedestrian access to the area.

ACCESS TO YOUR PROPERTY
Once the designated viewing areas on Victoria Embankment, Westminster Bridge, Waterloo Bridge, Lambeth Bridge and Belvedere Road/York Road reach capacity, a number of closures will be put in place restricting pedestrian access to specific areas. Each of these closure points will be supported by a team of event stewards who will be briefed to allow access to any resident and any guests of residents should they require. Please be aware that once these barriers are closed there will be considerable crowds both sides of the barriers so they will take some time to cross. Closures come into effect between 21:00 & 23:00.
To ensure your evening runs as smoothly as possible, we would suggest you and/or your guests carry something with your name and address which can be shown to the event stewards when passing through closed barrier points. This is not obligatory; however it may speed up your and/or your guests’ movements within the area.

For those who are unable to carry proof of address (a utility bill) resident wristbands are available for those living within the barrier closures, for Addington Street, York Road, Chicheley Street and Belvedere Road. On the night please show your wristband to the stewards who will let you though the barriers, enabling you to access your property. If you would like to apply for a wristband, please send a stamped addressed envelope to:
Hayley Shingles, Jack Morton Worldwide, 16 – 18 Acton Park Estate, The Vale, London, W3 7QE, detailing the names of those who require them.

If safe to do so, the Police enforcing the road closures may allow residential traffic through road closure points so you can access your property during the closure times. However, due to large crowds and public safety there will be no vehicular access to York Road, Belvedere Road, Victoria Embankment, Whitehall Place and any roads leading south of the Strand or Fleet Street between the closure time and the time it is deemed safe to reopen the roads (circa 01:30 – 03:00). Please ensure any guests invited to your property are made aware of this fact.

PUBLIC TRANSPORT
Special services will be provided on buses, Tube and National Rail on the night. However, please note the following measures will be put in place:
Westminster station will be exit only to Parliament Street from 21:30 on 31 December 2012 and will close when public safety requires it due to large crowds in the area no later than 22:00 or earlier. The station will fully reopen no later than 02:00 on 1 January 2013.
Exit from Embankment station will be via Villiers Street only. Embankment station will be closed briefly at
23:30 on 31 December 2012 and will reopen at 00:15 on 1st January 2013. Access will be via Villiers Street only. 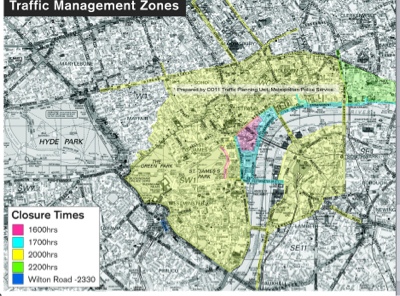 Charing Cross station will be exit only for London Underground from 23:45 and operating as normal for National Rail. London Underground services are anticipated to be restored no later than 03:00 on 1 January 2013.
Temple station will be closed if public safety requires it due to large crowds. If closed the station will fully reopen no later than 02:00hrs on 1 January 2013.
For information on Blackfriars station, please check online: www.london.gov.uk/nye
Waterloo station will operate as normal; however, large queues are anticipated after 00:10 on 1January 2013.
Lambeth North will close from 23:30 on 31 December 2012 and reopen no later than 03:00 on 1January 2013.
Holborn, St Paul’s and Mansion House will operate as normal.
Further details on public transport on New Year’s Eve are available online at www.london.gov.uk/nye and will be available at all staffed stations.

PEDESTRIAN RESTRICTIONS
All pedestrian access across Westminster Bridge will be restricted from 20:00 on 31 December 2012 until approximately 01:00 on 1 January 2013.
Pedestrian access in both directions across Golden Jubilee Bridge/Hungerford Bridge will be closed at 20:00 on 31 December 2012. Access across the bridge is unlikely to be reopened until approximately 00:40 on
1 January 2013 or when the majority of the crowds have dispersed.
The Queen’s Walk will be open from the Westminster Bridge entrance only after 20:00 when a ‘looped’ one way system will be put in place with entrance and exit from Westminster Bridge only. Access will be maintained to any of the Queen’s Walk restaurants that are open until 22:30.
Pedestrian crossing of the river will be possible from Lambeth Bridge to the West and from Waterloo Bridge to the East until such time when these viewing areas also become full. At this point Southwark Bridge to the East and Vauxhall Bridge to the West will remain open for cross river access.

TRAFFIC RESTRICTIONS
Please be aware that these have changed since last year
On 31 December 2012 Whitehall Place, Whitehall Court, Horse Guards Avenue, Northumberland Avenue, Craven Street, Great Scotland Yard, Horse Guards Road, John Adam Street, Adam Street and Villiers Street
will close at 16:00. Victoria Embankment, Savoy Street, Carting Lane, Savoy Place, Arundel Street, Whitehall, Richmond Terrace, Derby Gate, Canon Row, Whitehall Gardens and Westminster Bridge will close at 17:00.
All other roads in central London will begin to close from 20:00 and will remain closed until the crowds have dispersed and the litter cleared (circa 01:30 – 03:00) on 1 January 2013 or it is deemed they are safe to reopen. 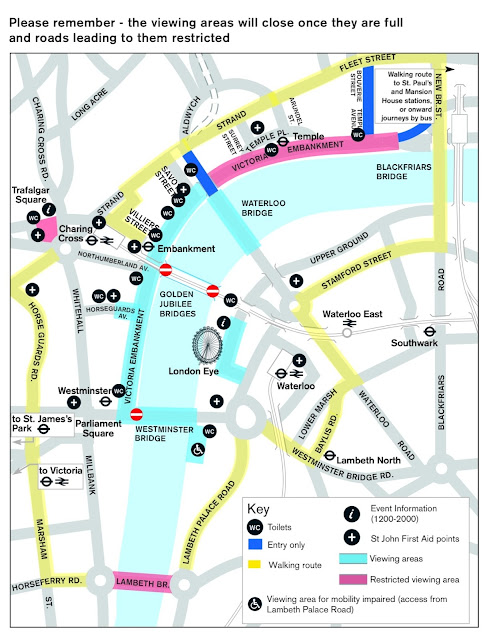 Still all the while the UTG meet with them and say nothing then TfL can state: 'The Taxi Trade raised no objections'.

Will the Cabbies Cabinet make a difference? Well at least other voices will be heard and TfL won't have the UTG as an alibi.

That alone makes me think that it will little more than a PR stunt.We shall see.

Sorry for typo in title
All sorted now.