We have been informed that:
On a routine stop, police noticed that a PHV's license roundel, was out of date. When questioned, the driver informed the officer that his new replacement roundel was back at the office.

This raised suspicion and the driver was accompanied back to the office where he produced an envelope containing a bundle of brand new PH vehicle license roundels.

After police made further enquiries at the SGS's Hanworth passing station, three senior staff members were arrested. One was later released without charge, but two have been bailed to appear in December. Subsequently, two members of SGS staff have been sacked.

LTPH have known for over two months that defective vehicles, some which could be in a dangerous, life threatening condition, are being used as minicabs, having not passed proper inspection.
The scale of the problem, which could be massive, is unknown.

Statement from LTPH:
Can't say much as its an ongoing case, but the problem was identified by SGS and LTPH called in the police.
They also said the problem wasn't wide spread. This is contra to what we have been told by our source.

When confronted at yesterday's Taxi Drivers forum at Palestra, they had no more to add.

So what have LTPH done about this?
Have we seen CO's turning up outside clubs and late night bars with lines of PHVs waiting to become hired?

No of course not

Have we seen all the PHVs passed by the two sacked members of SGS staff, recalled for re examination?

Have we seen the continued harassment of Taxi drivers subjected to frequent badge and bill checks?

Yes of course we have...

Over the last few weeks.

...We've seen an expose' about a man wanted in connection with genocide and mass murder, who has been working as a licensed minicab driver in east London for the last 12 years... When asked about this, LTPH said they can't comment on individual cases!

...We have seen the sale of 39 satellite office licenses to a company that had only been trading for 12 days, contra to LTPH's own guild lines... Notice how LTPH are moving away from calling them satellite offices. They are now referred to as operating centres!!

...We have seen a plethora of PH companies offering a Taxi service or private hire Taxi service, contra to private hire act 1998... Apparently LTPH are unaware of the contravention of acting as a Taxi driver without badge and bill.

Non of these problems have been satisfactorily dealt with by the current Director of LTPH.

We've known for a long time, just how easy it is to set up a minicab that looks fully legal.
(And so do the sexual predators, who pray on victims, hiding within lines of PHVs, illegally plying for hire.)

Roundels can be sourced from breakers yards and forgeries are readily available. Secondhand minicab vehicles can be bought fully licensed for a whole year by non PHV licensed drivers. Plus some are used to avoid the congestion charge.

LTPH pre-booked only stickers have been available on eBay for as little as £1 each (I managed to purchase 4).

And now this... Genuine roundels being sold for cash.

TfL are about to launch the usual Christmas message on behalf of Safer Travel at Night.

Be safe, make sure your minicab is booked
They even have a cabwise iPhone app.
But will they be informing the public that the minicab they're getting into could be a life threatening cut and shut? 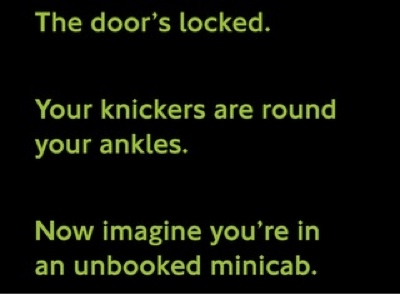 Posted by Editorial at 8:22 PM

Yet the collaborators continue forge their alliances with TfL staff - Chit chattering on Twitter and mobile phones. Every Armenian that I have ever met usually turns out to be a Turk. Fender is but one letter away from "Bender!" Gecmis olsen !

don't know how they can even see, let alone read, through the tinted glass, the Licence ROUNDELS, of so many these vehicles!

Well done again Jim, another exclusive.
What are our other orgs doing
They are supposed to be protecting our interests
FFS silent Bib is on the board if TfL
WTF does he do for his 25k a year other than just turn up?