A taxi drivers’ leader has declared war on minicab drivers by vowing to sue them for allegedly picking up so-called flag downs.
Mathab Khan, chairman of the city’s hackney carriage association, claims some minicabs are costing Cardiff’s black and white drivers around £2m a year in lost fares.

It is illegal for unmarked minicabs to pick up people flagging them down – they are only allowed to carry passengers who have pre-booked.

Mr Khan said he has repeatedly approached the council to inform it of the alleged licence breaches in the hope it would take action but claims the authority is allowing minicab drivers to “flout the law”.

He said if a minicab driver picks up a fare without a booking then their insurance becomes null and void and they become unlicensed taxis.

He said that last weekend members of the Cardiff Hackney Carriage Association recorded 127 minicabs operating illegally and it is now willing to bring a civil action against any minicab driver picking up flag-downs.

Mr Khan said he has requested the names and addresses of the taxi drivers whose licence plates he has reported from the council but it has refused.

“This has been going for the past five years and the council are doing nothing about it,” he said.

“Since August I have reported more than 100 drivers to Cardiff council, giving them the time and place they were illegally working and their plate number. I’ve also provided them with examples of legal precedence in case they want to prosecute.

“The council have continued to ignore me about this issue so I’ve requested they provide me with the names and addresses of all those I’ve reported so that I can prosecute them on behalf of the association.

“Unfortunately they don’t want to give me the details though.”
He added: “These drivers are constantly flouting the law and the authorities are allowing it to happen.

“I’m having so many complaints from my members because they are losing around £2,000 a year each – that’s about £2m.”

Bryan Roland, general secretary of the
National Private Hire Association, said he was aware some minicab drivers had taken to picking up passengers without bookings in order to boost their income.
But condemning their actions he said: “As an association we do not defend the criminal actions of any of our members.

We tell them if they have been caught driving too fast or illegally plying for hire then don’t come to us. This association will not support illegal actions and we believe everyone should obey the rules.”
A Cardiff council spokeswoman said: “Licensing enforcement officers have investigated Mr Khan’s claims with regards to private hire vehicle’s illegally plying for hire.

“They have extensively monitored the area in which Mr Khan claims this to be happening, which has included ‘mystery shopper’ type exercises.

“There is no evidence to show that the private hire vehicles parked in the area are illegally plying for hire, they are acting legitimately and simply waiting for pre-booked fares.

“Officers have checked evidence of fare bookings.
“There are many business and hotels in the area that frequently utilise private hire contracts, which accounts for the number of private hire vehicles in the area.

“We are unable to divulge personal details of individual drivers to Mr Khan due to Data Protection Act restrictions.”

This man is a hero. Note the usual pathetic 'head in the sand' form the Licensing authority. 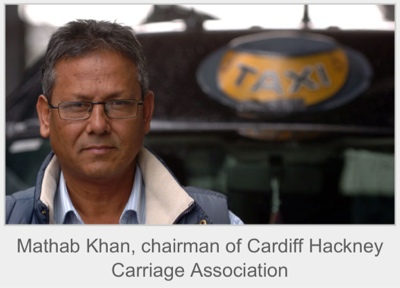 Posted by Editorial at 4:55 PM