Another Licensing Authority Shows How It Should Be Done.

Illegal taxis are being driven out of borough

Taxi drivers have been celebrating a court case victory that will put the wheels in motion to drive out operators that have been illegally touting for business on their patch.

On Monday Omar Ashfaq, who owns Ash Travels, was convicted at Watford Magistrates Court on eight charges of operating in Dacorum without a licence for the area.

The business owner was giving the impression he was local by using a telephone number for his home in Berkhamsted.

He was given a 12 month conditional discharge and ordered to pay £5,000 in costs.

The ruling will be a warning for other drivers touting illegally in the area.

“Further action may be pursued against other illegal private hire operators and drivers where the council has sufficient evidence to place before the courts.”

The conviction came after months of protests by taxi drivers in the borough whose livelihoods are being affected by taxis from other areas taking their business.

Driver Luke McIvaney said: “It was an ecstatic day for Dacorum taxi drivers. We can now work without fear of losing big chunks of business to drivers from other areas.

“We are looking forward to our licensing authority pursuing more cases and we will do further protest action if other illegal drivers don’t go in reasonable time.”

Dacorum drivers have been campaigning against illegal drivers stealing business for more than three years.

Mr McIvaney estimates there are about 20 to 30 cars still operating in the area.

He said: “From a public safety point of view people will be able to trust they are being picked up by taxis licenced by Dacorum Borough Council, which adhere to the council’s high safety standards.” 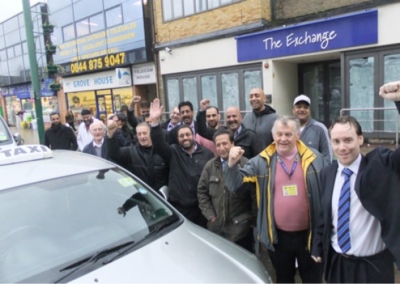 Quite an interesting video especially the first 6/7minutes! - http://www.youtube.com/watch?v=SkpF3A9xR2c&feature=plcp

thank you you so much, Anonymous 1:45 PM, for the youtube LINK

if you are a private hire driver, I give you very special thanks, for giving us such an insight into your gang's thinking

your spokesman stated that, there was no need for the proposal that, inside your vehicles there should be any details of the, Vehicle's, driver, owners, or of the Company that it belongs to - as the customer would know what company they'd booked the vehicle with

how convenient for your TOUTS & SCABS!

you then had the affront, despite the many hundreds of attacks & rapes that have taken place by your drivers in their anonymous vehicles, to bring up Worboys

when you're with a group of Doctors, do you talk about Shipman?

what a grubby crowd you are

you're an insult to the best, most admired, TAXI PROFESSION in the world - no wonder you're jealous