Another Licensing Authority Shows How It Should Be Done.

An uninsured minicab driver has picked up a fine for illegally plying his trade in Cambridge after a crackdown. Well lets face it, you didn't really expect it to be in London, did you?

Asaddar Ali, a private hire driver, was caught in a joint operation by Cambridge City Council and Cambridgeshire police. And you didn't really expect it to be LTPH and the Met either!

Ali, of Bullen Close, Cambridge, has been convicted of unlawfully picking up passengers following a joint investigation.

The 50-year-old was found guilty by city magistrates this week of plying for hire for which he was fined £110.

Did you hear that Mr Mason, it does exist, Illegal Plying For Hire. And the case went before a magistrate that knew and understood the law!

Because he wasn't booked, Ali's vehicle was found to be uninsured against third party risks, for which he was fined £150 and issued six penalty points.

It now has to be pointed out that this is always the case, for illegal plying for hire as well as touting. LTPH once told me they concentrate on touting because its a more serious offence, which simply is not true.

Ali already had six points on his driver’s licence and so was disqualified from driving immediately for six months.

Cllr Colin Rosenstiel, the council’s licensing committee chairman, said:
“We will always try to educate the taxi and private hire traded and provide guidance on appropriate practices, but where this approach fails we have no alternative but to deal firmly with breaches".

I have it on good authority that there are also no mass murderers, or anyone wanted in connection for genocide, driving minicabs in Cambridge.
He went on to say:
“The licensing team from Cambridge City Council has a commitment to ensure that the trade keeps within the law and ensure public safety.”
Hope you caught that Mr Mason, Mr Daniels and Mr Hendy!

"Only hackney carriages are licensed by Cambridge City Council to ply for hire in the city".

"Private hire vehicles are only licensed to take pre-booked fares and cannot be hailed to pick up passengers on the street.

Cllr Jeremy Benstead, vice chairman of licensing, said:
“Cambridge City Council has a commitment to ensuring that licensed activities stay within the law"
which is more than can be said for TfL/KTPH.
"Illegal use of private hire vehicles can put the public at risk, and won’t be tolerated".
Perhaps this is why London has such an appalling record when it comes to serious sexual assaults and rapes in minicabs.

“The vast majority of private hire drivers operate within the law, but the city council will ensure that those who choose to operate outside of it are dealt with firmly.”

Unfortunately people's safety in London is compromised by TfL, LTPH and the Metropolitan police with a policy of turning a blind eye in order just to clear the streets.

NOT FIT FOR PURPOSE, HOW DO THESE MEN SLEEP AT NIGHT. 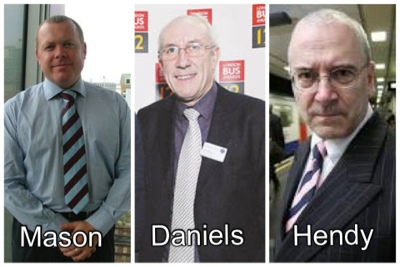 NEWS JUST IN FROM READING
Private hire driver fined £2,000 for illegal pick-up
November 07, 2012
A private hire driver who illegally picked up a customer in the town centre has been ordered to pay more than £2,000 after appearing in court.

Mohammed Arif, of Northumberland Avenue, denied plying for trade in Friar Street on December 8, 2011, but was found guilty after a trial at Newbury Magistrates Court on Tuesday, October 30.

The court heard Arif, 61, had been caught during an undercover operation by Reading Borough Council with Thames Valley Police officers acting as customers.

Councillor Paul Gittings, Reading’s lead member for environment, said he was pleased with the outcome.
“Most people who flag down a private hire vehicle in the street do not understand it is illegal and they are uninsured for the journey,” he said.
Posted by Editorial at 12:40 AM

All convicting minicab touts of illegal plying for hire

These three sleep at night because their pillows are full of public money!

Daniels and Hendy are bus people that have made a mint from privatisation and cannot begin to understand the cab trade or licensing.

Mason is a front man charged with doing the bare minimum and cutting costs, if the occasional unlucky passenger is raped then as long as its kept outof the main press then alls well.

What does Birmingham, Cambridge, Manchester, Oxford, Reading, St Albans and most other places have that TfL doesn’t. A legal team that understands the Law of the land as lay down by Parliament and knows how to implement and enforce it.

So now we have Reading cracking down on Illegal Plying For Hire
It seems the only authority not enforcing this legislation is LTPH. We need a GLA enquiry into the reasoning behind their failure to protect the public from this abuse.

Personal agendas must be exposed

Write to your assemble member now and get them clued up about what is going on, or should I say what is not happening.

it seems to me that, the Authorities are doing everything that they can, to kill-off our World Famous, World Respected, World Renowned, Trade, whilst bending over backwards, in EVERY conceivable way, to ASSIST the Private Hire network

is it possible under a Freedom of Information request, to find out EXACTLY what, INSTRUCTIONS have been given out, by & to and what is the, REMIT, BRIEF & AGENDA of:

Metropolitan Police - who when it comes to us, know the very Letter of the Law

Don't get so worked up,

the Law Commission are about to make it legal for private hire to pick up at (pick up points) as mentioned in STaN,with the blessing of the UTG.

Yes folks the future is safe with the UTG, they have it all in hand.

Any day now there will be the complete removal of satellite offices, touts and PH touts.

You will see Hendy, Mason & Danils all in hi-vis at 3 am in Soho on a Saturday cracking down.

Commsioner Hogan-Howe will be there with teams of hihgly trained officers ferrying the miscreants off to the nick.

Dont be cynical? you know it will happen.

New sign erected above the staff entrance to Palestra.

ABANDON ALL PRINCIPLE ALL YE WHO ENTER HERE

How do you apply for a PH licence? I Hear once you have one you can do what you like.

No one is authority in The Met area, and that includes TfL, wants to know.