Girl gets a no strides ride in Perth cab

So you think London Taxi drivers are not the best dressed in the world, well we certainly are not the worst.

This story from PerthNow...

A PERTH woman has told how she got into a taxi on the weekend - only to discover her cab driver was not wearing pants.

Jessie Gravett, 21, told PerthNow she caught a taxi from a North Perth address about 12.30am on Sunday morning after a night out and was appalled to look over mid-journey and see the cab driver apparently wearing no pants and no shoes.

She managed to snap a photo of the driver on her mobile phone as she exited the cab after arriving at her Spearwood home and has lodged a formal complaint with Swan Taxis.

"I got picked up by a taxi in North Perth and then I was messaging my boyfriend as I got in the taxi so I just opened the door and got in and sat down, I didn't even look at the driver because I didn't expect to see anything," Ms Gravett said.

When she eventually looked over at the driver, she could not see any clothing on his legs.

"I'm 99 per cent sure he wasn't wearing shorts because I could see," Ms Gravett said.

"The only clothing I could see on this guy was his work shirt.

"He just kept driving and I was messaging my friends the whole way letting them know what I had happened.

"I didn't talk to him and ask him why. He might have had harmless intentions, but if he did have bad intentions I didn't want to ask a question about it."

Ms Gravett said she felt "scared and uncomfortable" and the experience had made her think twice about catching a taxi in Perth alone at night.

"It's made me feel a bit worried about doing it," she said.

The Department of Transport has told Ms Gravett they are investigating the incident and would interview the driver next week. 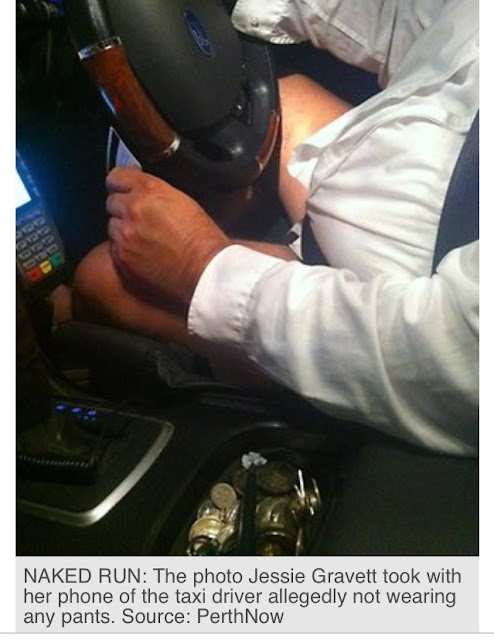 Posted by Editorial at 2:22 PM