More than three hundred operators gathered at Heathrow recently to discuss issues which could potentially change the shape of the Private Hire and Chauffeur industry.
The Licensed Private Hire Car Association held its AGM which heard from officials from Transport for London, Metropolitan Police and the Olympic Delivery Authority, attracted companies from all over the city who made their opinions heard on Transport for London’s review of the industry.
Operators heard from head of the association, Steve Wright who highlighted the main areas of concern within the document which was published in a recent issue of the LPHCA’s magazine. 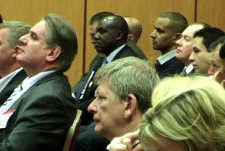 More than 300 attendees heard the presentations
The purpose of TFL’s consultation was to review various aspects of the existing licensing policy and regulations covering private hire operators, drivers and vehicles. John Mason, TfL’s Director of Taxis & Private Hire answered questions from operators during the meeting and assured members of the LPHCA the re-branded Public Carriage Office was willing to work with the industry to find the best working practices.
Highlighted issues within the consultation included an idea of ensuring every Private Hire Vehicle were the same colour, banning tinted windows in cars, additional ID badges and the introduction of a single vehicle identification plate. The most controversial issue was to introduce a rule which says drivers must not initiate any sexual dialogue or have any sexual
contact in a licensed vehicle.
The meeting, which was sponsored by Mercedes-Benz and Proximo, also heard from Metropolitan Police Chief Superintendent Joe Royle, of the Territorial Policing Safer Transport Command. He spoke about the fight against illegal activity by touts and some operators and the plans of how they will be tackled in the future.
A number of videos are soon to be revealed through the LPHCA’s website which highlight the discussions held at the event.
Background.
In 1998, legislation was passed covering the licensing of private hire operators, drivers and vehicles in London with regulations introduced in 2001 – 2004 following a comprehensive consultation process. All operators were licensed in 2001 when drivers and vehicles were initially covered by temporary permits. Full driver licensing was introduced from 2003 and vehicle licensing from 2004.
Under the 1998 legislation, the responsibility for implementing and carrying out private hire licensing fell to the Public Carriage Office (PCO), the arm of the Metropolitan Police responsible for regulation and licensing of London’s taxis. On the creation of the Greater London Authority and Transport for London (TfL) in 2000 as the Mayor’s integrated transport authority, the PCO transferred into the new body, subsequently becoming part of TfL’s Surface Transport as London Taxi and Private Hire.
There are approximately 1,000 small operators and 2,000 standard operators currently licensed in London by TfL.
Editorial comment:
A level playing field? I think not.
Where is our mass meeting with LT&PH Bosses?
Posted by Editorial at 3:10 AM No comments:

How Green are Boris Bikes FOI request.... By Laura Cox

INFORMATION ABOUT VEHICLE FLEET:
In addition to the permanent element of the fleet, Serco are temporarily using some additional vehicles. These vehicles do not form part of our normal operational fleet, but they have been used recently as we test alternative redistribution arrangements.
The number of vehicles used varies in accordance with the usage of the scheme.
Eight to ten vehicles are despatched in the morning through to late evening in the centre of London.
Three to four Ford Focuses and/or Mondeos are despatched to the outer areas of Zone 1 in the morning and overnight.
Five to six Sprinter vans are primarily used to cover any shortfalls in the Alke vehicles or Ford vehicles.
The trucks are used primarily for the mass distribution of bikes at hub sites. They are also used in the event of tube strikes when demand is high.

Lets not forget that the cost to the tax payer of each bike equates to approx£16,400 each, after Barclay's subsidy is removed.

Value for Money or just blinded by green issues?
Posted by Editorial at 3:14 PM No comments: