WCC have expanded their $CAMera car fleet to 7 and soon these will be enhanced with APNR to allow drive-by muggings.

So far, NoToMob (www.NoToMob.co.uk) are aware of the following popular Westminster honey-pots. It seems they are a bit short of sites now with the extra cars as they keep tripping over each other. They already have a couple of new hang-outs, e.g. Lwr James St, but we need to know where the new ones are ASAP. Obviously, we follow them from their base, the Pig Pen at Orchardson St

Please use the comments facility to post locations here with any useful info, e.g. confusing/missing/unenforceable signs, or Tweet us at NoToMob, if you spot one in action, as we can often provide them with immediate 'assistance' 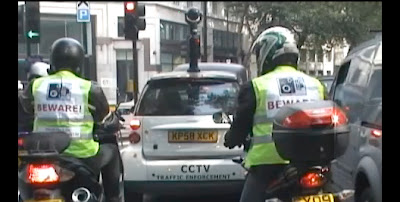 CCTV Smart Car Hunting is a new ‘sport’ that has already Grabbed the attention of the BBC’s watchdog program soon after it was invented by a dedicated band of NTBPT motorbike and scooter riders – who have been spurred into action to oppose Westminster City Council’s (WCC) highly controversial and regressive bike parking tax scheme. And, hot news tonight is that the Evening Standard has picked up on it too. The thrills and spills of Smart Car Hunting are often filmed and the latest action can be seen on U-Tube – with one of the first expeditions becoming the subject of ashort documentary by a fellow biking blogger at nutsville.com. Video reports of other missions can be found here, here, and here.
Currently, riders and readers who live outside London, Kent or the North West may not have seen these mobile PCN fine churning machines yet… But as each one has raked in an average of £187.667 per year so far, with the BBC reporting that £7.3m came from London in one year, you probably will soon unless their profitability is significantly damaged by those who would a Smart Car hunting go. But to be fair to WCC, they have not yet officially topped the UK league tables of PCN ticket dishing and revenue raising from Smart Car CCTV as Lambeth are top dogs with an impressive 34,000 fines being issued by just three cars in one year which raked in a cool £1,689,460. However, it is of course my duty in the interest of balance to report that deployment of these mobile fine factories is, according to the councilors who support heir use, not about raking in cash at all. Oh no! As Councillor Nigel Haselden, Lambeth’s deputy cabinet member for sustainability and transport has said.
“CCTV enforcement is vital in making sure we can deal with the relatively small number of motorists who insist on ignoring the rules. Parking enforcement is categorically not about raising money, it is about keeping roads safe and clear.”
I have to admit though that I am a tad sceptical about the truth of that claim and find the phrase, my arse, coming to mind. After all, a recent FOI investigation by Big Brother Watch revealed that there are at least 54 CCTV Smart cars patrolling 31 local council areas in Britain. In the interest of balance I should point out that deployment of these surveillance Of course  councils at least £8,069,714.67 in fines in the period 1st April 2009 – 31st March 2010. This is equal to £322,788.58 for every council operating a CCTV Smart car, or £187,667.78 per car.
Enthusiasm for the new sport is spreading and becoming all the rage in central London. But I am now reliably informed that interest in the sport is growing throughout the UK biking community. In response to growing interest in the sport, a NoToMob Twitter account has been set up. And, I have just been informed that preparations are in hand to provide a ‘starter pack’ of advice on setting up a new hunting team and how to engage in the sport in an appropriately civilised and legal way.
In the meantime, here is a brief description of the new sport and how it is played:
Teams of plucky bikers draw attention to the whereabouts of mobile CCTV units that cruise around or sneakily park while trying to film minor traffic offences or parking infringements and rake in loads of cash by dishing out thousands of PCN fines.
So, step one in the hunt:

Find a smart car. Once spotted by a hunting team, initial contact is made with the pray by a friendly wave to the car.
Then sooner or later, the chase is on!
Step two:
The second phase of the hunt involves the mobile fine machines being provided with an ‘escort’ of riders who alert all road users to the presence of a CCTV unit that may have not been there before. But please note this well! A key rule of Smart Car Hunting that must not be broken ever is that the pursuit is purely and simply of the car and it’s camera system, and NEVER it’s occupants – who are merely employees of a private contractor who are going about their lawful business – albeit one that involves them breaking parking control regulations whenever they feel like it.
Step three:
The hunt is declared successfully over  when the CCTV Smart Car buggers off back to it’s shed.
Alternative interim move before step three:
Occasionally the occupants of the Smart Car may experience a misguided feeling that they are the focus of the chase, and may be being subject to some form of harassment, and to a point where they call for police  intervention and a premature end to the hunt. In these situations the Smart Car Hunting team must dismount from their motorcycles or scooters and engage in a polite conversation with the officers called to the scene. During the course of the conversation the hunters must politely explain that they have no interest whatsoever in the occupants but are only interested in escorting the  Smart Car and seeing where it goes, and that as cars have no feelings they cannot experience any meaningful sense of harassment.
Experiences of teams engaged in the sport so far shows that the police officers called in these situations are well aware that cars can not feel harassed and are therefore fully prepared to except that no harassment has taken place during the course of the event. I have no idea what impact this new sport may have in due course so all I will say for now is Happy Smart Car Hunting for those who care to, and Tally Ho!
Posted by Editorial at 3:25 AM