STATEMENT FROM THE ADMIN OF LUDICROUS ROAD CHANGES

A new Ludicrous Road Closure FaceBook group, has been set up in response to a hostile takeover of the original group. 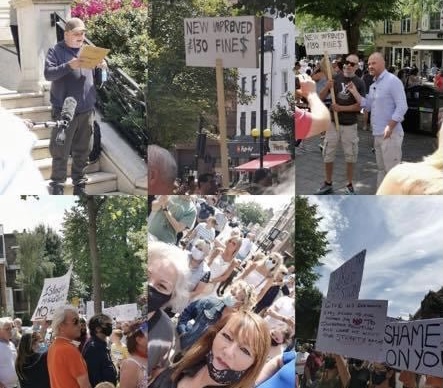 The entire admin on the old group has now been replaced by members of the WeAreIslington FB Group and the name of the group changed.

No one should be under any illusion about how this came about.

Restructuring was never discussed nor was there a democratic process to decide who should be part of the admin team.

Democracy is something that the previous admin held in high regard. This should ring alarm bells for all involved.

Whilst we have no argument with members of the WeAreIslington Facebook group, we are still firmly in dispute about the funds that were paid into Jody Graber’s GoFundMe page.

He has since given back £600 of residents donations but is adamant that the remaining £500 was donated, after he declared he was running for council and was therefore entitled to it.

We strongly disagree, and so do many of the residents who donated.

At the same time another two people left the committee group and aligned themselves with WeAreIslington. They also ceased to be admins on the LRC FB group, with one exception....Steve Kenton.

Steve is involved in the WeAreIslington group but because he wasn’t an admin on WeAreIslington we saw no harm in him remaining as an admin at LRC. It was a matter of trust.

There was never an explanation, nor was there any indication of who was reporting the posts.

It became abundantly clear that sabotage was at play.

This all came to a head yesterday when Steve Kenton took it upon himself to take control of the group and remove five administrators from LRC, and replace them with members of the newly formed WeAreIslington group.

Steve is not an Islington resident. He claims the changes were made by consensus, by which he means it was supported by members of WeAreIslington group who have never been part of LRC’s committee, or at the very least, not for the best part of two months.

I’m sure you will understand, this is malignant behaviour in the extreme. Regardless of the reasons, no one has the right to undermine the hard work that has been put in collectively, or disregard the people that have come together to tackle the issues that are affecting each and everyone of us. It’s totally unethical.

The group is currently archived due to the backlash.

Derek, the creator of LRC - who’s had to take a few days out on compassionate grounds - is devastated. Please support him as he has been tireless in his fight against these persecutory policies.

Moving forward, we cannot comment on the progress made by other groups, but recently we’ve written again to the council informing them that they have a duty of care to respond to the ever increasing number of concerns.

With that, we have submitted testimonials from residents, local businesses and trades people who have commercial interests in the area.

We have set up a second group to run alongside the committee that consists of business people (specifically those that have been financially impacted), people who have legal experience, and potential candidates to challenge the council at the next election.

The flash demo group – the brain child of RV - is thriving and serves as a brilliant platform to network, gather testimonials, speak to residents at street level, and importantly, deprive the council of revenue.

The micro-protests have proven to be indispensable in conveying our message to people who don’t fully understand what is happening.

We are in touch with someone who can hopefully facilitate a meeting with Grant Shapps, from the Dept. of Transport.

This is vital as pro-LTN Lobbyists are all over the government at the moment. We desperately need to redress the balance.

We are currently in touch with Ealing, Hackney, Bow, Greenwich, Lambeth, and Camden with a view to organising a pan-London demonstration in Whitehall.

It really is madness at the moment with all that is going on but we need to persist with a multilayered response, and try and tackle these injustices from all sides.

FINALLY! Restrictions are easing in London after the 2nd December and we need to show the council that we have most definitely NOT gone away.

Therefore, we are calling a demonstration outside Islington Town Hall on SATURDAY 12th December.

Let’s show the powers that be that we are bigger, stronger, and more unified than ever.

Posted by Editorial at 8:23 PM No comments:

Chairman Of The LCDC Writes To The Boris Johnson, Grant Shapps And Sadiq Khan, Asking For Age Limit To Be Frozen At 14 Years, As Taxi Emissions Have Already Been Cut By 45%. 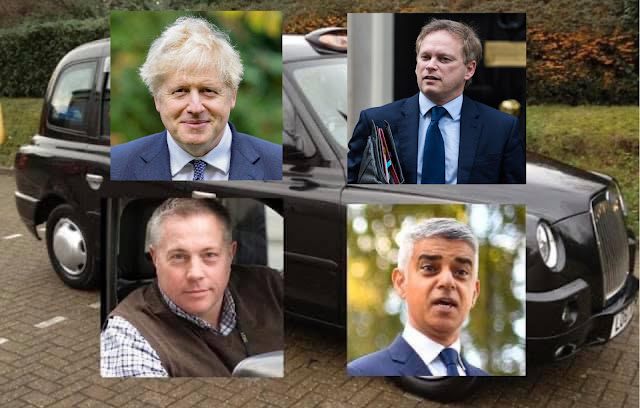 With the high numbers of older taxis coming off the the taxi fleet in London and the numbers at an all time low, we have the figures to show that we ( taxi trade ) have cut our emissions by a staggering 45% already.

Next year there will be 2,200 more taxis coming off the road and because of this I have asked the Mayor, Boris Johnson and Grant Shapps to agree that the age limit is frozen at 14 years.

We have all the relevant data to substantiate our position.

Today, I received this reply. 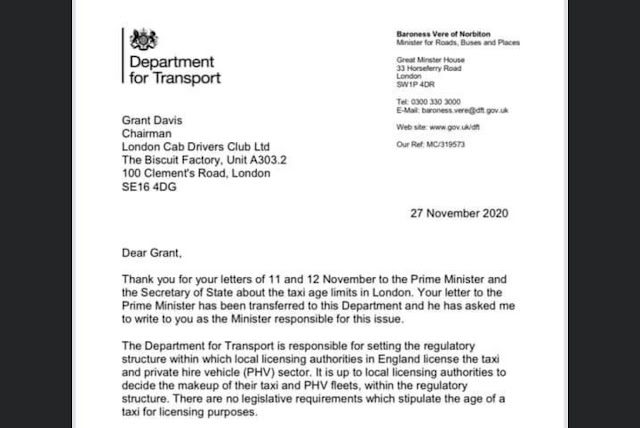 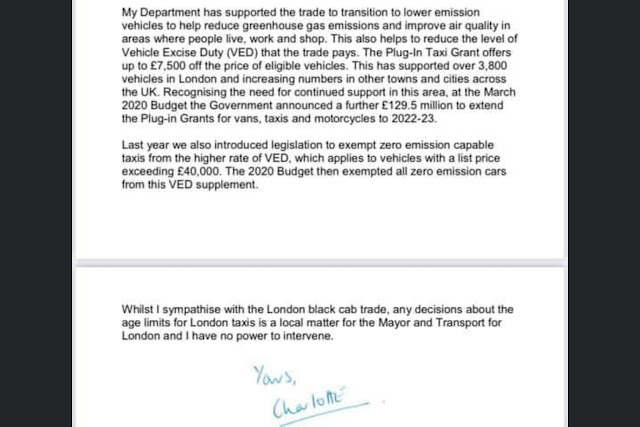 Posted by Editorial at 7:32 PM No comments:

Are Barnet Council Guilty Of Misuse Of Government Funding On Bus Lanes That Exclude Taxis? 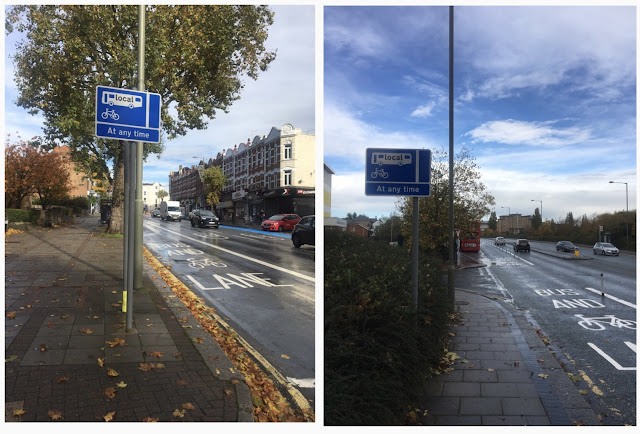 High Road, which Taxis have been totally excluded from and now can’t use.

Amazingly, as a London Taxi driver, I’m allowed to use all the bus lanes in Brighton.... but there are increasingly more I’m not allowed to use not in London, the area that I’m licensed to ply for hire by TfL.

This is total madness.

What’s more, Barnet Council have used government money, that was intended to fund the provision of cycle lanes. 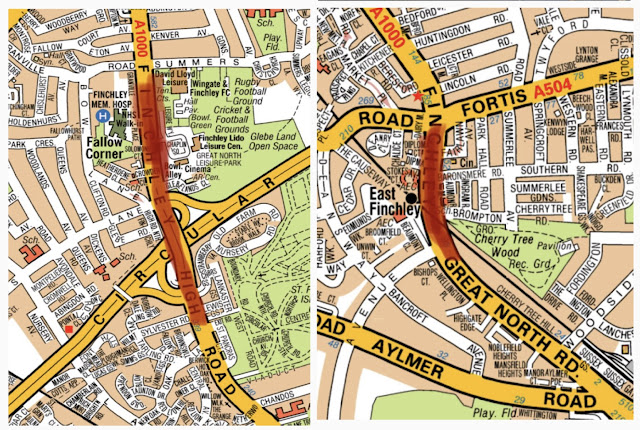 They have now installed two completely unnecessary stretches of bus lane, which they say were implemented to speed up bus journeys, and yet ironically, they are holding up the buses, which are now getting stuck in the half mile of stationary traffic on the approach to the new lanes.

Posted by Editorial at 2:07 PM No comments:

After Making It Almost Impossible For Workers To Return To Their Offices Through LTN Road Closures And Bus Gates, The CoL Now Calls On Government For Return To Office Plan 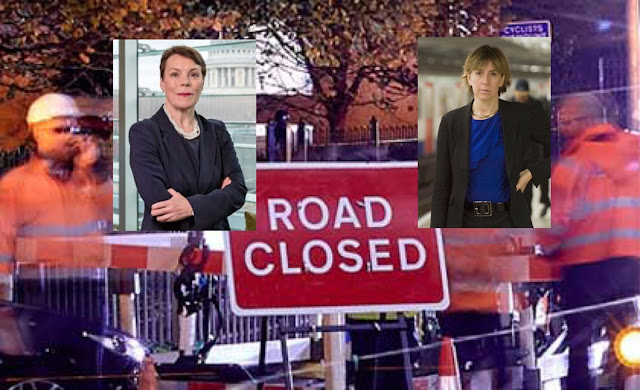 The City of London Corporation has called for the government to set out a back-to-work plan to allow staff to get back to their offices as soon as possible. But to be honest, who wants to work in a massive building site that once was the Jewel in the crown of world finance.

Responding to today’s new guidelines for the winter period, the Square Mile’s governing body said it was vital that businesses were given a “clear plan” in order to get the economy going again. Well we T Taxi Leaks have come up with a perfect plan....remove all restrictions and let’s get London moving again.

“Today’s announcement of a COVID-19 Winter Plan is welcome and it is good to have clarity on the arrangements for the festive period and into the new year”, said policy chair Catherine McGuinness.

“However, what we also urgently need from the government is a clear plan to allow office workers to return to Covid-secure workplaces in order to get as much of the economy operating as possible.

“This is vital to protect livelihoods.  We also need a thriving economy to help pay for the vast amount of support being provided at this time.”

Unfortunately, under the rules announced today, people will still be asked to work from home where it is possible for them to do so.

With the new restrictions set to stay in place until March, many employees will have gone a whole year without setting foot in their workplace.

However, the recent announcements that a number of vaccines have proved effective against the disease have boosted hopes that a return to normality might come sooner than expected.

Recent research from consultancy Arup (remember them from the Garden Bridge fiasco, who head hunted the deputy mayor Isabel  Deadring) found that the effective rollout of a vaccine could inject £41bn into London’s economy and save tens of thousands of jobs.

McGuinness went on to say:

“With reports of a coming vaccine it seems there is finally light at the end of the tunnel, but in the meantime Londoners should continue to act responsibly by complying with the new rules in order to reduce transmission, save lives and protect the NHS.”

We’ve said it before, and we’ll say it again :

Licence renewals are now more often than not, a total nightmare... and they shouldn’t be.

If a driver has had a licence or in many cases, multiple licenses, then renewing every three years should be a breeze. But as most drivers know, this is not the case.

When renewing your DVLA driving licence, most transactions are completed in just days, while a Taxi drivers licence takes (in my own particular case on the last renewal) up to five months.

Yes there are some that are renewed in a few weeks but this is not the norm.

Once you’ve had you statutory DBS check and if required, a medical, then it should be automatic. But then this is TfL and nothing is simple and obstacle free with TPH. The Taxi and Private Hire licensing department is woefully inadequate and needs a complete overhaul.

Posted by Editorial at 9:56 PM No comments:

Another Data Breach Of Your Personal Information To A Third Party ...By TfL 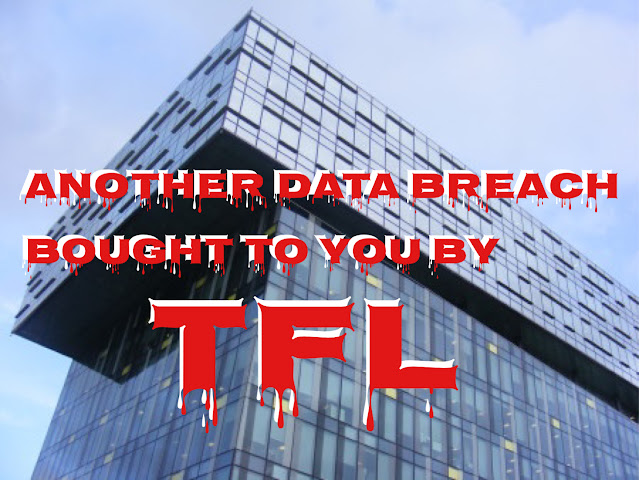 It appears TfLTPH  have again breached the data protection act and given all our details to a third party.

If you get an email from Taxidriverandprivatehire.Survey@tns.kantarsurvey-v.com

Don’t open it, don’t reply or click on any links.

This isn’t the first time TfL have given your details to a third party.

I have asked on multiple occasions about previous leaks of our data to third parties but every time I ask, I meet a wall of silence.

How many TfL employees are furlowed working from home, who could have done this legally, for next to nothing through TfL’s own systems ???

Checks should also be made to see if any TfL senior staff have connections financial or otherwise in this company.

We’ve been told TfL were bankrupt, they’ve been to the government cap in hand twice in just a few months!!!

And yet they can still afford this ???

Any data leak need to be investigated, but like the 13,000 fake private hire DBS certificates, the TaxiReviews scandal 2018, has been swept under the carpet.

Those who have been in the trade long enough will also remember the cover up over the stolen blank driver bills, that stated turning up for sale on the black market, for £1,000 a pop, complete and filled in with driver details plus a metal badge.

Apparently, these blank bills went missing in the move from Penton Street to Palestra.

Contact your MP and tell them what’s going on here with TfLTPH.

Posted by Editorial at 11:05 AM No comments:

As we’ve said before with TfL, when it comes to public safety...it’s all about the money. 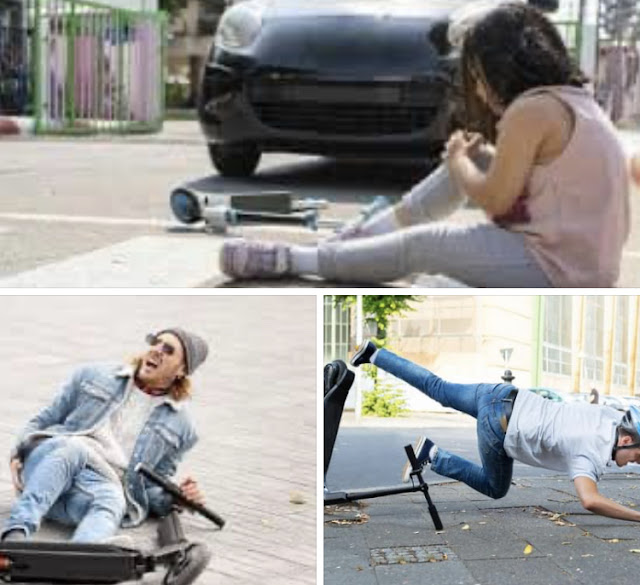 In this trial by TfL, we ask:

HOW MANY PEOPLE WILL HAVE TO BE KILLED OR SERIOUSLY INJURED BEFORE TFL DROP THIS RENTAL BUSINESS???

As we’ve said before with TfL, when it comes to public safety...it’s all about the money.

Posted by Editorial at 11:01 AM No comments: